Take It And Leave It: Inside The Pack of A Modern Nomad - Shareable
Skip to content 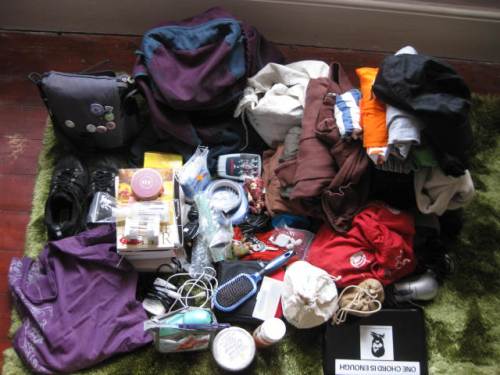 A departure present from my first office job, which I left to go traveling in Canada when I was eighteen. I'm thirty-three now, and it's been around the world and back since then. This pack has been emptied by American, Australian, and Kurdish officials, left out in the rain by Norwegian baggage handlers, soaked through with sweat in Macau, and used as a seat anywhere I've been left waiting. I was going to replace it when it finally developed a tear recently, but realized it would be cheaper and more sensible to have it mended in London. Plus it felt wrong to just discard my pack after so many years of loyal service. The tailor said it was a fairly arduous process, but it looked good as new and, at £20, was far cheaper than a replacement.

Netbook
I'm a freelance writer and editor, with emphasis on the editing if you're talking about jobs that pay. I'm qualified by pedantry, rather than by my degree – sociology with gender studies was never something I expected to get me far, though I did spend several years as a staff member at a support project for sex workers. I opted for self-employment when funding was cut two years ago and I was laid off. Since then, my netbook is about the only significant thing I've had to buy, making it possible for me to work while traveling. It's small enough to fit into my shoulderbag without anyone guessing there could be a computer in there. It has introduced me to aspects of the 21st century I was slow to adopt, like Skype and wifi, which I still kind of interpret as magic air. It has a USB mouse which a stranger from the internet gave me in Edinburgh when his office was getting rid of some stuff. My business is called “Out Of This Boring Neighbourhood,” which is a line from a song by the anarcho-folk-punk band Defiance, Ohio, but the name takes on additional meaning every time I gather my things and move.

Ancient mobile phone
People laugh at me because it's so old and can't do anything fancy, but I don't really care for hi-tech gadgets. I already use the internet too much; I don't need to be switched on even more. When I'm overseas, I don't bother buying local SIM cards. It's mostly there so I can tell the time, be contacted by friends, and reach help in an emergency. I only send text messages if I really have to, otherwise, I call and hang up, leaving friends “missed call” icons on their phones to signal agreement with a plan or to let them know I got home safe.

Money
I raided my childhood coin collection for currency from countries I expected to visit in the near future, which I have merged with money from places I've just left. I've got Euros, pounds sterling, American and Australian dollars, Swedish kroner, Iraqi dinar, Turkish lire, Malaysian Ringgit, and a coin from pre-handover Hong Kong which I figure I can maybe still get away with. Last year I had a bank account that didn't charge for foreign transactions, but those days are over. Now I need to withdraw large amounts of cash in one go to make the charges worth it. Sometimes I don't get any work for a month or more, but I have enough of a safety net, plus I'm enough of a cheapskate, that I can cope without it for a while if I really have to. Because of these fluctuations, I don't keep to a strict budget, but play a fun game called “What Is The Absolute Least Amount Of Money I Can Spend Today Without Having An Utterly Miserable Existence.” Greater financial stability would be nice, but a regular job would mean I couldn't keep moving so much. I weighed up the pros and cons and this is the result.

Books
I stopped buying new books after I joined the redundancy club. At the moment, I'm traveling with one book I won in a blog competition, one book I bought cheap in a second-hand bookshop, one book I was given years ago, and one book lent to me recently by a friend. At least a couple of these will be passed on to others when I'm done with them. I write this from Leipzig, where I'm cat-sitting for a month. Having a postal address here means I can look forward to receiving another book in the mail; before I headed out into the world, I listed titles on bookmooch.com that I was willing to part with, and sent them to people who requested them. Now when I hear of a good book, I add it to my bookmooch wishlist, which seems to get me over the psychological hurdle of wanting it instantly; eventually, if someone lists their copy, I'll get a notification e-mail and I can use some more of the credits I've accumulated.

Clothes
Most of my t-shirts were purchased new, but I'm no longer adding to that collection. Any clothes I acquire nowadays are hand-me-downs or the odd charity shop discovery. My stripey sweater and corduroy trousers came from a friend in Chicago last autumn. My waterproof jacket was £5 in the Leigh-on-Sea PDSA (People's Dispensary for Sick Animals) shop. My green v-neck sweater came from a free shop in Edinburgh, my khaki trousers and cloth bag from a friend in Barcelona who was clearing out his possessions in advance of a move to Copenhagen. I don't care much for shopping anyway, and these clothes hold memories of the people and places they came from.

Footwear
I bought my kung fu slippers in Barcelona for €5, when I was reconsidering my options after heartbreak caused me to leave Berlin in a hurry. Whenever I have a base camp for a while, I wear these around the house. When I'm in hot countries, I wear them out and about.

I bought my trainers for about £45 a few years ago, back when I had stable employment. At the moment they're still covered in mud from Iraq. They get leaky and I've thought about replacing them, but if they don't get a chance to dry after it's been raining, two pairs of socks will get me through.

Passport
It's obnoxious that an EU passport affords me so many privileges, but I'm not going to argue. I find cheap ways of getting around the world thanks to airport listings on Wikipedia and the painstaking notes I make as I scroll through them: Istanbul to Colombo, Colombo to Kuala Lumpur, Kuala Lumpur to Gold Coast – that's Turkey to Australia for £280, and two extra countries along the way, a few days in each. In Australia I'll visit friends and look after somebody's dog for a few weeks. After that? I don't know. Maybe New Zealand. After becoming self-employed, I had figured I couldn't leave Europe again until I had a stable income. It hadn't occurred to me yet that I could justify it if I didn't have rent to pay.

Guiding principle
When I figured out where I didn't want to be, but didn't know where I did want to be, I decided to remain open to any opportunities that came my way. This means that at times I don't know where I'll be in two weeks or a month, but if I hold on long enough, something will turn up. The basic set-up is this: I seek out cheap routes and accept detours, I visit friends, couchsurf with strangers, and enjoy space to myself by taking care of people's homes and pets while they're on holiday. After a while, you get used to the short-term nature of everything.

Keys
Eventually, some day, I'll return to my flat in Edinburgh. Till then, my best friend is living in it, paying most of the mortgage, and forwarding mail once in a while, when I have an address to give her. I have no idea how long I'll keep on traveling, I just know I'm not ready to go back. 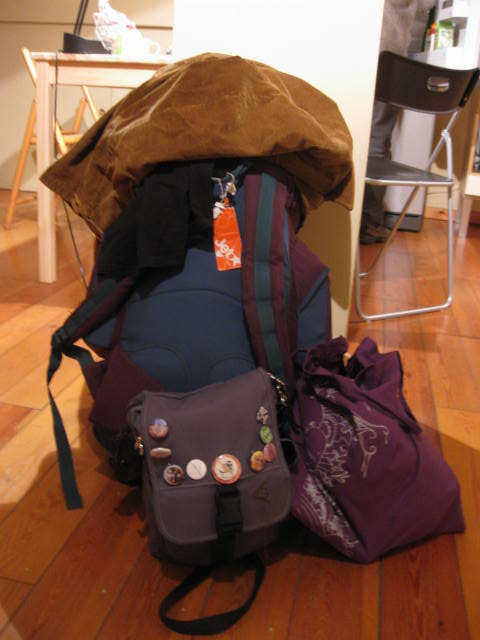 Once in a while, I feel really kind of lost. Sometimes I'm sad for no good reason, but that's something that would equally happen were I to stay home. I remember when I had more security, be it work, a routine, a partner, or some kind of stable social space. But I also remember that there were reasons behind my decision to leave. Before I left Edinburgh, I was bored and frustrated, drinking too much and behaving badly, and I think it's better to see the world and go home only when I can be certain I won't return to more of the same. Meantime, I'm happy most of the time with what I'm doing and where I am, and appreciate the connections I get to forge along the way.

There isn't much of a script for what I'm doing. I'm not one of those people who saves up, quits their office job and travels around the world in the appropriate order for exactly one year. I'm not a smug freelancer whose office is a beach hut in Thailand. And I'm not daring enough to hitch across a continent by myself and camp by the side of the road.

And still, others tell me that they could never live the way I'm living, that they're not brave enough. But I don't think it takes much, really. You need to be resourceful and confident; reasonably streetwise but also open to the prospect that most people are basically good. The kindness of the people I meet on the road continues to overwhelm me, and I aim to both repay it and pass it on as far as possible.

I feel like I'm cheating slightly, with my passport and financial reserves, and I always want to stress that those financial reserves are finite, but two facts remain: one, I'm still in a better position than many, so I'm not going to moan about how broke I supposedly am, and two, these are strange times, and nothing is guaranteed any more – if it ever was. So you make the best of what you've got. I fell into what I'm doing now thanks to the choices that were taken away from me, and with them went the reason to stay home.

This essay appear in Shareable's paperback Share or Die published by New Society, available from Amazon. Share or Die is also available for Kindle, iPad, and other e-readers. For the next article in Share or Die, Hannah Brencher's "Heartbearts And Hashtags", click here.

Originally from Northern Ireland, Nine is responsible for the zines "If Destroyed Still True" and "Sex Industry Apologist", and the blog Abyssinia Henry [https://abyssiniahenry.wordpress.com]. She routinely fails to see the

Originally from Northern Ireland, Nine is responsible for the zines "If Destroyed Still True" and "Sex Industry Apologist", and the blog Abyssinia Henry [https://abyssiniahenry.wordpress.com]. She routinely fails to see the standard tourist attractions, but she likes visiting aquariums and taking boat trips when she can afford them. You can follow her on Twitter at @supernowoczesna.