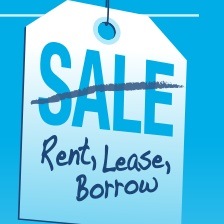 As the sharing economy continues to grow, the stereotype of who is participating in it is shifting. A recent survey conducted by Harris Interactive on behalf of solar power company Sunrun found that, far from being limited to young people in urban centers and coastal cities, there is a nationwide trend toward “disownership” that crosses age, geographic and cultural boundaries.

More than half (52%) of the 2,000-plus Americans surveyed have rented, leased or borrowed items including cars, bikes, clothing, vacation homes, tools or home appliances in the last year, rather than buying them. A resounding 83% said that they would rent, lease or borrow these items if they could do so easily. The leading reasons given for this growing “disownership” were saving money and cutting down on storage and/or maintenance.

The survey also found that the 24% of Americans 55 years of age or older were more likely to rent, lease or borrow traditionally owned items today than they were five years ago. More than half of those aged 45-54 have done so in the last two years. Of respondents in the Midwest, 46% plan to “disown” items in the next two years. In the South, that number jumps to 50%.

While a survey sample size of roughly 2,200 is relatively small, the results paint an interesting picture: that sharing and “disownership” make sense no matter where or who you are.

In addition to releasing their survey results in the handy infographic below, Sunrun also created a Guide to Disownership as an introduction to the sharing and “disownership” movement. The Disownership Manifesto, included in the guide, begins with the insightful statement, “The new status symbol isn’t what we own, it’s what we’re smart enough not to own.”