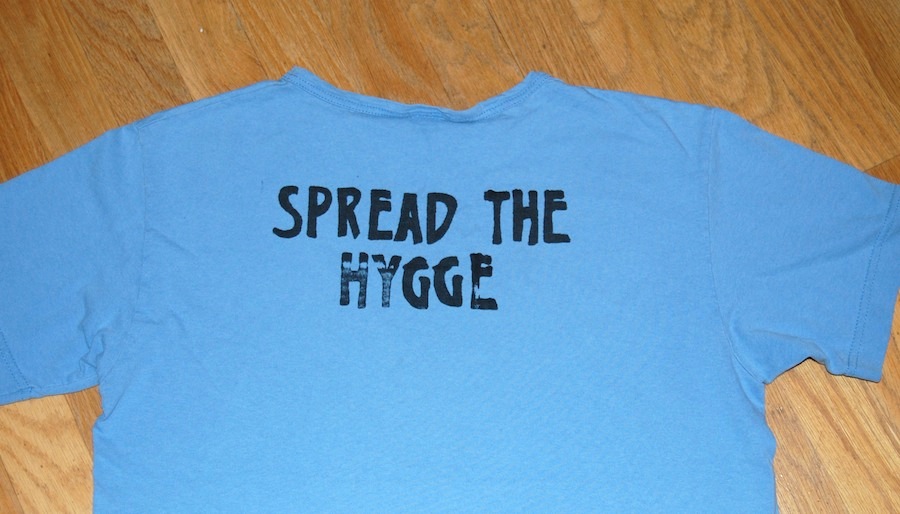 I have a t-shirt that strangers regularly stop me to ask about. On the front is an image of a woman sitting under a tree reading, and the phrase, “Rock and Roll Lifestyle.” On the back the shirt says, “Spread the Hygge.”

The shirt is old and faded, a souvenir from an early-2000s, Santa Cruz, California band called Josh and Hugh Make Hygge, comprising Josh Alper and Hugh Holden. Josh and Hugh were the underground music connection in Santa Cruz at the time—the guys that out of town bands would call to get help setting up a house concert; the guys in-town bands would rally around because they were so supportive of, and connected to, the local scene; and the guys who threw shows lots of people turned out for—even if they didn’t know the bands—because it was something Josh and Hugh were doing so it was going to be fun.

The disconnect, on the front of the t-shirt, between the quiet reader and the rock and roll lifestyle brings smiles and the occasional remark, but it’s the Spread the Hygge message that invariable draws the question, “What’s hygge?”

Hugh explained hygge, (pronounced something like “hooga”), to me as a Danish word meaning warmth and good cheer. Every time I wear the shirt I’m reminded of good times, good friends, and the idea of spreading good feelings. When people ask what hygge is I tell them what Hugh told me. 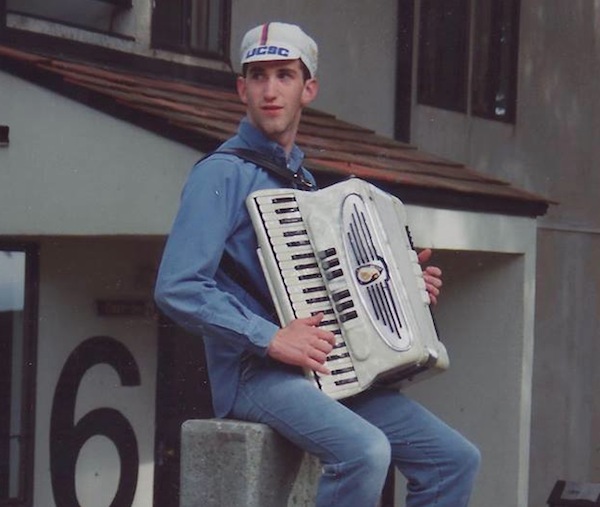 Years ago, Hugh left Santa Cruz for the greener pastures of Portland. Josh stayed in Santa Cruz, where he worked as a UC Santa Cruz librarian and remained a core part of the local music scene, playing in an endless stream of bands, setting up shows, putting out records, connecting people who could help each other with music-related projects, and encouraging musicians of all levels.

One day last year I bumped into Josh in a local coffeeshop. As we waited for our drinks we started out talking about music, but the conversation quickly drifted over to other life stuff. He asked how my writing was going and my response was something like, “I’m really busy, always trying to keep up with everything.”

His response, delivered with a concerned look, stopped me fast: “But, do you like it?”

The truth was, and is, that I love freelance writing. I find it incredibly fulfilling and challenging in all the right ways. I realized, in that moment, that the story I was telling about my life didn’t match how I feel. I made a mental note to make sure to share the excitement and satisfaction I feel about writing in the telling of my story.

It was a perspective-altering, profoundly Josh moment. It was Josh making sure I was living and spreading hygge. The conversation stayed with me for several days.

A week later, Josh was killed while riding his bike up Highway 1. The devastation the loss of Josh created in the Santa Cruz community can’t be overstated. It cut fast and deep, forever changing those who knew and loved him. In an instant, an era was over; a friend-to-all was gone; the candle of good cheer was dimmed.

Now, over a year later, Josh is spoken of regularly. There are photos of him at various spots around town and even a life-sized cutout of him at one of his favorite coffeeshops. There are “Never Forget Josh Alper” stickers and buttons all over Santa Cruz and the Bay Area. Knowing the long reach of Josh’s hygge, I imagine the buttons and stickers have been shared far and wide.

I recently asked Marianne Burgess, a Dane living in Santa Cruz, to explain to me exactly what hygge is. She said it’s a feeling of warmth and coziness but that there’s not a good translation to English. She says hygge is the most important word in Danish and that the good feeling it describes has nothing to do with being wealthy. The goal, she says, is to have a hyggen time, a hyggen event, and a hyggen home with a nice, warm atmosphere.

“In our life, the most important thing is to have hygge,” she says. “We are not so focused on money—we are really focused on hygge. It’s a feeling that you are always welcome.”

Maybe the focus on hygge is why Denmark is regularly named the world’s happiest country. All that warmth, coziness, welcoming spirit, and good cheer must contribute greatly to individual, community, and national happiness.

In the US, we get a taste of hygge around the holidays when there’s an emphasis on home, family, sharing, gatherings, and warmth. But what would it take to bring more hygge into our lives year-round? Less emphasis on making money? More focus on connecting and sharing and welcoming people into our homes? I think yes.

I also think that hygge is a way of seeing the world—a way of sharing the good things in our lives and staying focused on the abundance around us. It’s a way of passing along good cheer, all year long.

So, as Josh and Hugh would say, Spread the Hygge!