To get citizens out of their cars and onto a newly-opened public trolley system, the city of Murcia, Spain recently embarked on a rather radical campaign: it offered people lifetime trolley passes in exchange for permanently reliquishing their cars.

Despite the growing popularity of hybrid and electric vehicles, giving up your car is still the single best way to reduce your carbon footprint. Car sharing services like Zipcar and RelayRides make a significant impact, but the bottom line is that those vehicles still contribute to poor air quality, traffic, and wear and tear on the roadways.

But not everyone lives in a bikeable or walkable city, and public transportation, at least in the United States, is usually only a option for those that live in dense metropolitan areas. So convincing people that they can survive without their cars takes some creative marketing.

Check out a series of ten-second videos used to advertise the campaign here.

Murcia started its car-free campaign by demonstrating one of the main disadvantages of owning a car: you have to have a place to park it. Using humor to drive the point home, the City set up a series of cars parked in impossible places around town, such as atop other cars. 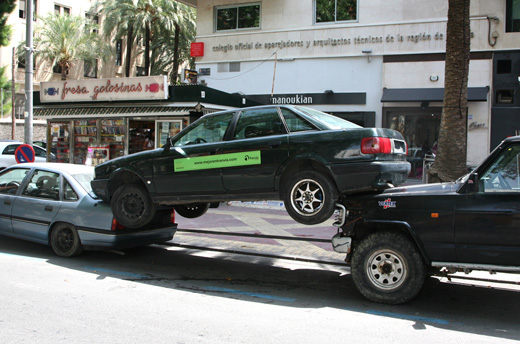 In late June, all the cars collected during the limited-time offer were put on display in a prominent part of the city. Bit by bit, local mechanics are making them literally "disappear" by removing a part for each comment submitted to the campaign via Facebook or Twitter.

Many cities encourage people to use buses, trains, and trolley systems in lew of driving, but few offer are willing to offer such a compelling incentive for this difficult behavior change.

In a time when some want to cut funding for U.S. biking and walking programs, it's encouraging to see a government that's willing to spend a little money to show how easy it can be to permanently ditch the car.

Would you trade your vehicle for a lifetime pass to public transportation? Tell us in a comment!