ShareHub: at the Heart of Seoul's Sharing Movement - Shareable
Skip to content 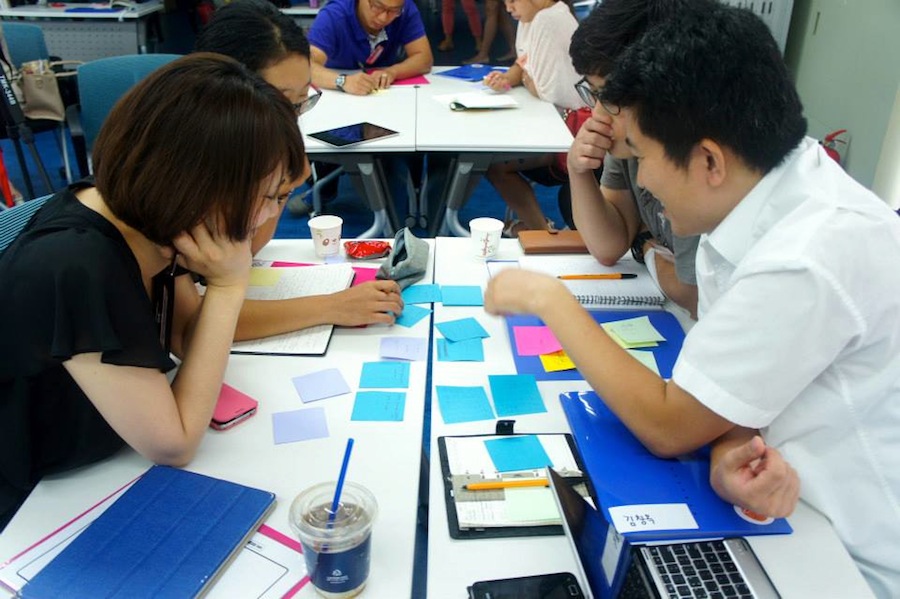 In 2012, Seoul publicly announced its commitment to becoming a sharing city. It has since emerged as a leader of the global sharing movement and serves as a model for cities around the world. Supported by the municipal government and embedded in numerous parts of everyday life in Seoul, the Sharing City project has proven to be an inspiration to city leaders, entrepreneurs, and sharing enthusiasts around the world.

At the heart of Sharing City, Seoul is ShareHub, an online platform that connects users with sharing services, educates and informs the public about sharing initiatives, and serves as the online hub for the Sharing City, Seoul project. Now a year and a half into its existence, ShareHub, which is powered by Creative Commons Korea (CC Korea), has served 1.4 million visitors since launching, hosts more than 350 articles about sharing, and has played a key role in promoting sharing policies and projects. Shareable connected with Nanshil Kwon, manager of ShareHub, to find out more about the project, its role in promoting sharing culture, and the future of the sharing movement in Seoul.

Shareable: What inspired the creation of ShareHub? What are your goals?

Nanshil Kwon: Many of you should have heard about the Creative Commons movement. We are Creative Commons Korea, a non-profit organization which spreads the idea of open and sharing in content, information and knowledge—including Creative Commons License, a method to share and distribute ideas and works in the digital age—in Korea since 2005.

ShareHub is a project that CC Korea has initiated to introduce the benefits of sharing tangible and intangible assets, and the value and meaning of sharing, to a broader audience. ShareHub collects news about sharing culture and economy, provides the directory of sharing enterprises and organizations in Korea, promotes the sharing related policies by the government, and connects government, companies, organizations and institutions under the umbrella of sharing. Our biggest goal is to see sharing culture settle in Korean society. 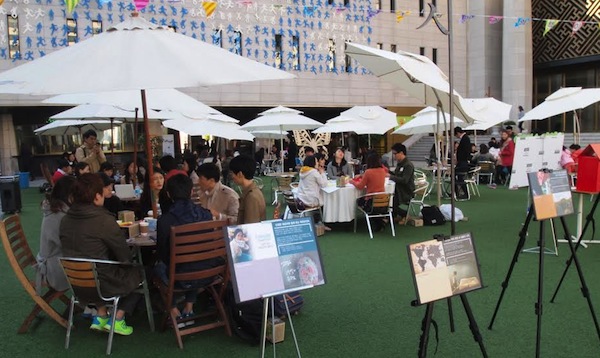 ShareHub brings together sharing enthusiasts in a variety of settings

What has ShareHub done since its inception? What are your standout accomplishments?

The official start of ShareHub was on June of 2013 with the launch of our online platform for sharing culture in Korea. While we have been running it for the last a year and a half, we’ve also educated the public with multiple conferences and a series of seminars, run various campaigns with sharing enterprises, published a book with great sharing cases in Korea, and worked on global networking with other sharing-focused organizations. ShareHub not only delivered interesting sharing news in and outside Korea, but also provided the categorized yellow pages for sharing economy companies, announced sharing programs within local communities, stressed educational resources on sharing such as studies, reports, videos and infographics, and issues a bi-monthly newsletter.

Noticeably, we had a CC Korea International Conference, called Share Everything, Connect Everything, last September. We had about 300 people interested in sharing present. At the conference, we looked through the function of city as a platform for sharing, analyzed the achievements of sharing economy companies, heard from Mayor Park Won-Soon, who claimed Seoul to be a Sharing City and shared his vision of the future, and had time to hear fresh perspectives from people of different backgrounds. What we found really meaningful was that the public now has a strong interest and understanding in sharing, and serious concerns as well. We hadn’t realized that people are now over the debate of whether sharing is good or bad, or necessary or not. They’re now into how to share.

What kind of growth have you seen with both ShareHub and the people using it? How many people work for ShareHub?

We would say the biggest achievement is that we see other teams and organizations working on sharing culture practice and promotion besides us. When ShareHub was first initiated in 2013, most of sharing economy or culture activities were organized and led by us, CC Korea and the ShareHub team. We were practically the only ones planning seminars, campaigns, content writing, you name it. But from 2014, we saw a wave of other players joining this movement. Local individuals contacted us how to share stuff within their own communities, and sharing enterprises voluntarily approached to us to co-write a guide book for sharing. Besides Seoul, other big cities such as Daejeon, Busan, and Gwangju ask for advice to have a plan for sharing city.

ShareHub is mainly operated by three to four full-timers. We manage posts on the website, plan and execute sub-projects such as educational campaigns, and communicate with other stakeholders within the scene. As the name demonstrates, our role is a hub to connect, cooperate and collaborate with other companies, government, and non-profit organizations.

Here are some numbers that would help you to understand what ShareHub has done. It’s not official data, it was just generated in September for internal use: We have posted 370 articles on ShareHub.kr up to last September; the number of accumulated visitors for last 15 months is approximately 1.4 million; ShareHub has cooperated with about 60 percent of the sharing enterprises among the pool we introduce on our directory; and opened classes for local residents and civil servants on sharing culture in one-third of the regions within Seoul city. 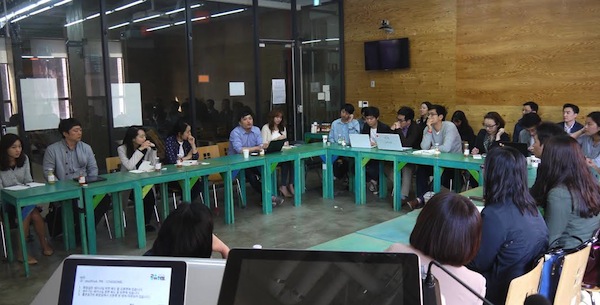 What feedback have you received about ShareHub from users and city officials?

We frequently meet and communicate with sharing enterprises and Seoul government officials to hear feedback about ShareHub's next step and role. Since their biggest needs are promotion of their businesses and policies, they wish to have more users through ShareHub's sharing culture promotion and news delivery.

We also heard back from Seoul citizens by assigning time for feedback after seminars or engagement campaigns. Most of them said that the notion of sharing itself is not so new. But to build up the sense of sharing in actual practice, they wanted easy examples to try or a kind of guide manual. In order to respond this feedback, we added a Guide menu on ShareHub.kr when we redesigned the website last September. You can view a step-by-step guide for sharing within your community, a manual for potential sharing economy start-ups, and information about toy libraries and tool libraries.

What other Seoul Sharing City initiatives is ShareHub a part of? How does it fit in the bigger picture of transforming Seoul into a sharing city?

ShareHub is like an intermediate bridge that spreads Sharing City, Seoul policies to citizens, companies, organizations and institutions. By translating government officials' language into citizen-friendly soft language, we encourage people to be a part of the policy execution. Also, we connect those sharing economy enterprises and organizations to Seoul government so that they can cooperate in order to efficiently practice Sharing City, Seoul policies. Lastly, ShareHub is the contact point for international attention to Sharing City Seoul—we inform those interested in the sharing metropolitan model what is going on inside and outside, and sometimes introduce the outer views to Seoul government as well. Our emphasis is on Sharing City Seoul not as something to be done under one institute's lead, but a collaboration of multiple players.

How does ShareHub collaborate with the city? What kind of support does the project receive from the city government?

ShareHub plans Sharing City policies in general alongside with the government as an advisory group. This year, especially, we are eagerly participating in issues of legal and political change. Where the government might have limitation in the ideas or information they can access, ShareHub provides the perspective and information from the civil society. ShareHub is partially supported by Seoul City financially, and sometimes in human resources and infrastructure as well upon request. 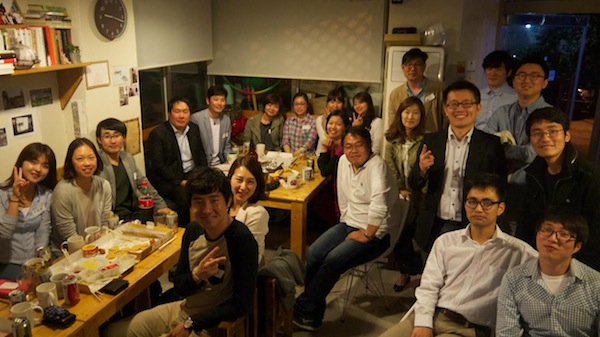 Collaboration is key to the success of ShareHub

What have been some of the biggest challenges and successes in creating, building and running ShareHub?

We would say that the beginning was the hardest part. All of us agreed the need for a hub, but it was really challenging to bring just the idea into realization. That was why we consumed a very large amount of time just to plan out everything. As we proceeded with launching the platform, organizing targeted seminars, running campaigns with sharing economy companies, studying local cases, analyzing the achievements and receiving feedback, we have an idea which way we are heading, and more confidence.

The biggest success we are having would be that other cities, besides Seoul City, occasionally ask us how to initiate a project like ShareHub. Daejeon, Busan, Gwangju, and many more cities are paying attention to this movement, and making local-level attempts.

What are some of the most important lessons learned from the platform and community using it?

Most of the individuals and teams who lead the sharing movement within their own communities are very passionate and enthusiastic. They are really good at recognizing and mobilizing the local resources. Their passion and energy becomes a great encouragement and impetus to us and makes us consider how to support them even more than we are.

What are the future plans for ShareHub? What would you most like to see?

So far, we have been focusing on spreading the meaning and value of sharing and creating a foundation for the hub. Now, we are hoping to make more practical cases of sharing at the local and community level. What makes it appear hard to average citizens is that there are not too many specific examples of the sharing culture movement. Nothing is really fixed yet, but we are looking forward to having success stories from local communities, perhaps by making a sharing village model, and showing people how to easily participate in sharing activities. It won't be easy, but it is worth doing it.

What advice would you give other cities that would like to start a platform similar to ShareHub?

This could be a cliche response, but we believe that collaboration is the most important key aspect. Government, for-profit and nonprofit organizations, and local communities should not just run alone, but share resources and cooperate with each other. It will be a lot easier if they discuss and exchange opinions from the very beginning planning stage, understand each other's circumstance, and grasp the requirement and needs of other stakeholders from the beginning. The nature of it is time consuming, but we should run not for short-term achievements but for the long-term vision and sustainability.

When we first started ShareHub, Neal [Gorenflo] from Shareable helped us a lot. He was so generous in giving us advice in the direction of the movement, and things to be covered in preparation. We now want to share our know-how with other cities, just like Neal did for us. We hope more cities join this movement of considering sharing, and practicing sharing.