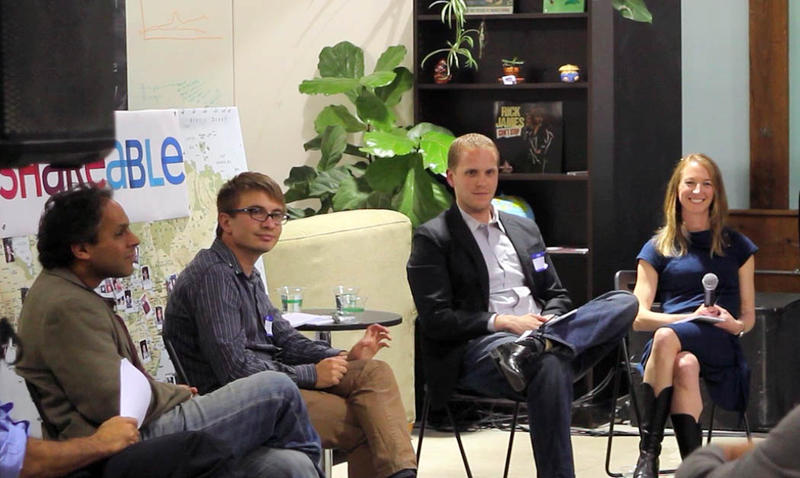 Shareable Salon’s first panel discussion on June 21 explored issues of trust and safety in the peer economy. Many companies in the space are exploring ways to improve security without eroding the sense of community that appeals so strongly to their user bases. What do Trust & Safety teams do exactly, and what are some of the ways these companies are increasing security while maintaining a sense of trust among members and openness to newcomers? Joining the conversation were:

Below are some of the highlights of the conversation from the evening as well as tweets from audience members and viewers of the Livestream. You can check out the video of the discussion at the bottom of this page.

Special thanks to Tammy Hagens for providing the video.

Moderator Angelo del Priore kicked off the discussion with the following definition of Trust and Safety.

Some tweets from the evening

Angelo asked which tool is most important – reviews, data mining, verification, or government and insurance. Jen responded that community is the most important source of trust and safety at Couchsurfing. She made the comparison of other “strangers” in our lives whom we “trust” all the time to do us no harm –  other drivers on the road, people in our apartment building with the ability to burn the place down. She challenged the conventional wisdom that strangers are less trustworthy than people we know. In terms of crimes, the opposite is often true, she said.

Jen added that she has been working with a small group of users who are deeply invested in the safety of the community and is working to highlight underreported crimes. The process involves introducing feedback prompts rather than waiting for feedback.

“People are reluctant to give public feedback for fear of reprisal, Jen says. “So we’re working to increase anonymous feedback from users.”

Because Couchsurfing isn’t a transactional marketplace, Jen says Couchsurfing has the luxury of worrying less about fraud, and can focus more on community reporting functions and learning how the community protects itself.

In response to the same question, Philip said the key is establishing a baseline of normal behavior. On any given night, 50% of Airbnb guests are returning guests, he said, which constitutes a baseline of what is good and reoccurring behavior. Anything that falls outside that norm requires proactive education of users.

The Trust & Safety team doesn’t hire “security guards,” Philip said, but rather “people who can actually communicate with other members of the community.”

Users with good communication skills are sometimes the best at building that educational platform, he added. But members of the Trust & Safety team can also insert themselves in the communication process. For the latter, he said 75% of communication is proactive, and 25% reactive.

Philip described the continuous effort to bridge the gap between online and offline behavior and to make sure users understand things such as secure payment structure, the review section, and what constitutes a completed profile.

Angelo next question was about the role of government in insuring trust and safety.  Philip responded by saying that because Airbnb is an international company, and there are international regulations governing what Airbnb does, that government is not particularly important.

Sonny pointed out that government databases are not always up-to-date, or easy to access.  Government data is part of a “suite of solutions,” he said, but not a solution in itself.

Bogdan had the most affirmative things to say in support of the role of government. He said that companies cannot build courts or systems of justice, and that the court system is thus critical for adjudication when things go wrong between users.

Angelo then asked Sonny why Jumio has succeeded while companies such as Legit and Scaffold, which tried to build aggregate user data from multiple companies to create online trust scores, failed.

Sonny said most startups are not looking to adapt new technology, but instead trying to build out their own platforms. Most of Jumio’s clients are big, established international companies that are feeling the pain of fraud and have the bandwidth and to tackle this specific problem with a specific solution.

“These smaller companies [such as Legit and Scaffold] were focused specifically on the startup space of collaborative consumption companies,” he said. “[Our clients] need a large infrastructure to support them across [multiple] countries, not just America.”

Angelo then asked about future tools on the horizon to increase trust and safety amongst existing users, and to attract new users.

Philip responded that the name of the game is to grant access to as many users as possible while maintaining an understanding how those users are going to act and interact on the site.

“While we are learning a lot from the initial launch of Verified ID, a lot of our hosts were already requiring this kind of verification,” he said of Jumio’s ID verification software. Airbnb recently partnered with Jumio, and now requires 25% of its users to verify their identities via the technology.

Sonny said that Jumio has just launched facial recognition technology, which will enable users to show their IDs and then show to their faces to the camera, and said this technology might be useful for high-risk people who are new to the community.

Bogdan chimed in with this counterpoint about human nature: “If you want to mistrust someone, who can find a reason to do it.”

He transitioned from the notion of the individual to that of a company.

“It is a very tough recipe to convince people they should trust. I don’t think anyone will ever find the perfect recipe.”

Philip said Airbnb thinks about how to combat what he called “moral hazard”, or negative anonymous behavior.

“We believe in a concept called moral equity,” he added. “The more you know about someone, the less potential they have to act badly.”

Angelo followed up with Philip, asking how Airbnb decides whether to offer insurance – a reactive approach to guard against the possibility of things going wrong, versus online identity verification, which is more proactive.

Philip responded that when is comes to risk management, it’s necessary to take an enterprise approach: “You can’t take a singular approach when looking at a community such as collaborative consumption. Verified ID works for certain situations while the insurance guarantee solves for other situations.”

Sonny talked about the lessons learned from eBay, arguably the first peer-to-peer marketplace in the world, which still suffers from $1 billion a year in losses from fraud, but protects its users.

“At first, eBay was similar to Craigslist in that it was buyer beware,” says Singh. “There were all these horror stories about people getting scammed and losing their money.”

Singh says eBay buyers no longer have to worry, even if a product doesn’t get shipped, because they will be reimbursed in cases of fraud or negligence. “It makes both buyers and seller comfortable in the marketplace.”

Jen says there is no one-size fits all approach to trust and safety issues. Different users have varying risk tolerance, especially when it comes to privacy.

“Some people sharing their data feels excessive. For others, it seems perfectly reasonable.”

Bogdan said risk optimization is tricky for sharing economy companies because interactions amongst users are not perceived as being just about business – they are seen as meaningful social interactions that build community.

“Security systems create an arms-length relationship with users that can damage the community feeling. You run the risk of it being just another marketplace instead of the sharing economy.”

In the concluding minutes of the panel, both Jen and Philip emphasized the importance of users themselves in safeguarding the trust and safety of their respective companies’ communities.

Sam Houston, a Community Manager at Couchsurfing, asked panelists how user communities can be activated to better educate new users

Philip responded, pointing to education again, referred to the “muscle memory” that users develop of how to do things.  He also mentioned the importance of testing new products and procedures to better engage with the community.

“We’re continually launching new products to examine how community can engage with itself, he said. “It’s not always about trust. It can be questions such as – What can I offer my guest when they come to stay? or even How can I find a plumber?”

Jen said she gives a lot of thought as to how community members educate each other, and how to help them do it better and at scale.

“Some of the ways they’ve already developed to help each other organically work pretty well,” she said.