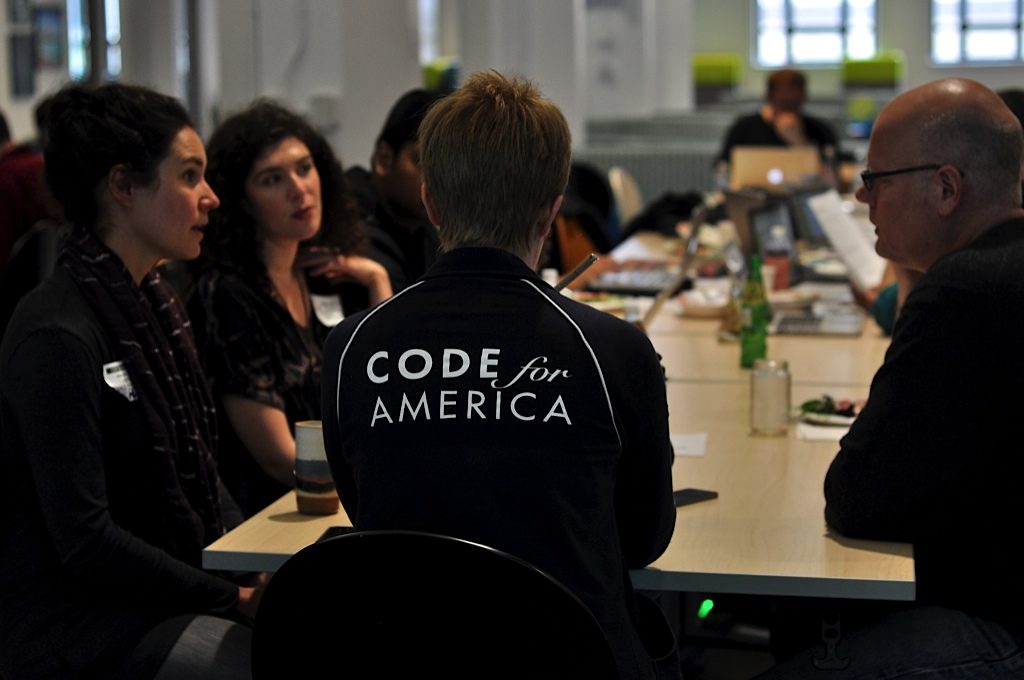 While the tech community continues to be demonized across San Francisco, nearly 100 mostly tech workers acted as angels this weekend by donating their expertise to a dozen homeless nonprofit organizations.

In a format similar to a hackathon, where small teams form to develop software programs overnight, ReAllocate’s HACKtivation for the Homeless paired nonprofit organizations with volunteers to address technical challenges that would otherwise be out of reach for the cash-strapped organizations. “Not everybody is being included in how fast things are changing and the benefits of those changes,” said ReAllocate’s Executive Director Kyle Stewart, who cofounded the event with community organizer Ilana Lipsett. “There are opportunities for technology to help inside these established organizations.”

The HACKtivation kicked off Friday night inside the sanctuary of Glide Memorial Church with a series of speeches from both the hosts and organizers. Formerly homeless people spoke of the role that Glide and other organizations played in helping them achieve economic independence, and one of Glide’s pastors told the story of the church’s history. With introductions complete, the nonprofit partners were then invited on stage to briefly describe their organization and talk about the challenge they were hoping to solve over the weekend.

Some of the problems were as simple as building a basic website for a new coalition of nonprofits; but others were more audacious, such as the Larkin Street Project’s request for help developing a mobile-first social network for homeless youth that would connect them to both services and each other.

After about 45 minutes of pitches, the various organizations spread throughout the sanctuary and waited for the “hackers” to choose which project best fit their skills and interests. Crowds immediately sprung up around some of the nonprofits, while others mostly talked amongst themselves until one or two brave souls broke away to assist the projects desperately in need of more manpower.

Though ReAllocate had explicitly called for volunteers from across the city and beyond the tech community alone, I spoke to a small handful of people who said they couldn’t code and seemed to bounce around the periphery before stepping out for the night. Though none of them seemed particularly frustrated, they explained that they weren’t sure how they could plug in to help solve these organization’s tech-oriented needs.

The next morning everyone reassembled at the offices of Yammer, a startup located in Twitter’s Market Street headquarters, and continued hacking throughout the day and into the night. The work then spilled into Sunday as the teams completed their projects, which they presented at Code for America’s offices on Sunday evening.

Homeless Employment Collaborative is a coalition of organizations helping individuals secure housing and employment through a variety of educational courses and other programs.

“After folks have graduated from our program and gotten a job, they are no longer part of our program and they don’t have a lot of incentive to stick around and stay in touch with us,” said Executive Director Karen Gruneisen. “A smartphone with continued data service in exchange for completing a quarterly survey with status on employment and housing can be just the incentive that we need.”

Over the weekend, Gruneisen’s team created an app using Surveygizmo and Twilio to do just that.

Hospitality House runs a community arts program in addition to a variety of other homeless services that allows artists to keep 100 percent of the money raised from the sale of their art. While those sales had previously been mostly limited to gallery showings, the organization created an Etsy store over the weekend to sell the art online.

Project Homeless Connect coordinates a homeless service bonanza a few times a year at the Bill Graham service center. These massive undertakings involve complex coordination of dozens of service organizations and hundreds of volunteers. Although the organization was already using Salesforce to run their site, their set-up wasn’t very customizable and couldn’t be configured to meet their needs. Over the weekend, a team comprised of volunteers that included Salesforce employees started transitioning the organization over to a new website that will allow volunteers to register themselves — changes that will save time by streamlining the process of coordinating volunteers.

The Homeless Prenatal Program also benefited from volunteers with Salesforce experience. Although their organization had been using Salesforce for 10 years, they continued to rely on an antiquated system that required their volunteers to fill out a form, which would later be typed into the system. Now, the Homeless prenatal program has a website that allows volunteers to sign up online. 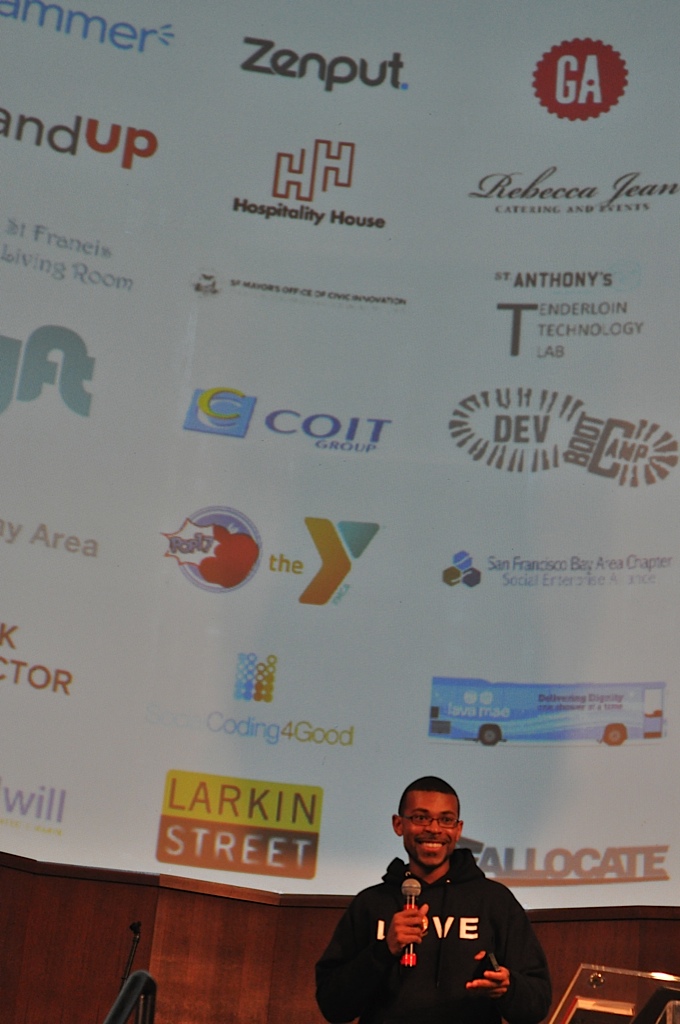 Until this weekend, Glide Memorial Church had no easy way to collect donations online and no mobile-friendly solutions at all. Now, the church has a mobile-friendly web app that accepts donations via PayPal and the app will soon be configured to work with both Amazon and Google’s payment platforms, while also taking credit cards.

The Larkin Street Project’s vision for a mobile-first social network for homeless youth proved a bit too optimistic for a weekend’s worth of work, but a couple of programmers did set the organization up with an SMS app that allows youth up to the age of 24 to reserve a shelter bed using text messaging.

Safe for Women is a new organization led by YMCA volunteers that formed over the weekend to create a new tool that provides anonymous support for victims of rape and domestic abuse through text messaging.

The Bay Area Open Referral Project is a part of a larger effort to put service resources online in a common standards format that will allow websites to deliver this information in whatever format works best. Over the weekend, the team transformed existing data on services offered in the Bay Area into a format that will work with something called the Ohana API, which is basically a standardized format for community service data that was developed by Code for America to create San Mateo County’s version of this resource (SMC-Connect).

Haven Connect is a company currently being developed by Caroline Caselli, Support Services Manager at Tenderloin Housing Clinic. “One problem that I noticed when I was helping homeless clients in the homeless shelter I was working at was that I was doing all the applications by hand and that was a pain in the butt,” said Caselli.

Over the weekend, Caselli worked with a designer to create a mock-up of a common online application, which could then be filled out one time and used to populate the numerous housing applications that don’t follow any standard format and are submitted on paper.

Market Street for the Masses, the St. Francis Living Room, and ABD Productions/Skywatchers are three separate organizations that either lacked a website or whose site did not meet their needs. At the HACKtivation, each of these organizations worked with designers and other volunteers to create new websites using WordPress that look professional and can also be updated by the nonprofit staff without significant training or technical proficiency.

“This is really the start of what we can make happen together,” said ReAllocate’s Stewart.

Starting April 16, the HACKtivations will continue as a twice-monthly, four-hour, weeknight hacking session to continue development on these projects and begin work on solving new problems. The April 16 event will be hosted at [freespace], which is located on Market Street at 6th Street.

Josh Wolf is an American freelance journalist and documentary filmmaker who was jailed by a Federal district court on August 1, 2006 for refusing to turn over a collection of videotapes

Josh Wolf is an American freelance journalist and documentary filmmaker who was jailed by a Federal district court on August 1, 2006 for refusing to turn over a collection of videotapes he recorded during a July 2005 demonstration in San Francisco, California. Wolf served 226 days in prison at the Federal Correctional Institution, Dublin, California, longer than any other journalist in U.S. history has served for protecting source materials. After Wolf released his video outtakes to the public, U.S. District Judge William Alsup ordered his release on April 3, 2007. In 2007, Wolf ran for mayor of San Francisco against incumbent Gavin Newsom (finishing in 8th place with about 1% of the vote). The next year Wolf accepted a position at the "Palo Alto Daily Post" where he reported on the San Mateo County government and that of several cities within the county. In 2011, Wolf graduated from the UC Berkeley Graduate School of Journalism and his thesis film "Police Tape" received the Reva and David Logan Prize for Excellence in Investigative Reporting.