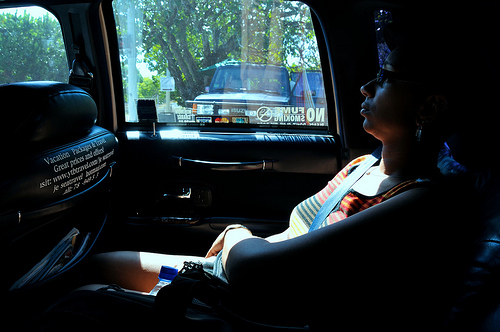 It’s a curious thing – this “no talking” etiquette that has crept in to some taxi cab sharing and ridesharing systems. While blogging yesterday about the new cab sharing program in New York City, I came across an older New York Times article describing the local cab sharing etiquette. It said: “To enter into a shared cab is akin to a vow of silence.”

I have often thought that people’s abilities to share will depend, ironically, on our abilities to set clear boundaries with each other. I think we’d all be willing to be more generous, share more, and give an inch here and there, as long as we feel assured that our co-sharers aren’t going to take a mile, so to speak.

The vow of silence in shared cabs is perhaps an extreme example of the kind of boundary-setting that enables sharing. On one hand, people can see the financial, ecological, and efficiency benefits of sharing a cab, but on the other hand, they don’t want to feel obligated to make conversation or listen to someone else’s ramblings.

With my introverted leanings, I can totally sympathize. At the same time, I like people, and I often enjoy talking with them and hearing their interesting stories. I wonder if we might miss out on something valuable if we set such strict boundaries.

I think there’s probably a middle ground where people can set their own boundaries, rather than let rules do it for them. Setting our own boundaries takes the skill to be able to say what we need without being judgmental and without putting people on the defensive. In developing these skills, I have benefited from Sharon Ellison’s writings on Powerful Non-Defensive Communication.

We could all probably benefit from exercises in boundary-setting: Think of an uncomfortable situation and come up with a non-defensive statement to communicate your needs in response.

For example, my friend Tess, who commutes an hour to and from work, recently dropped out of her daily carpool because she got tired of the constant chatter. How could Tess have, instead, asked for what she needed? Here’s one suggestion:

“I enjoy our carpool conversations, though I would also enjoy using the commute time to unwind and let my mind wander. How would everyone feel about incorporating quiet times into our commute?”

On a related note, I know of a couple that shares dinner with a neighbor many times a week, and they have at least one “no talking” night per week. It’s a chance for everyone to simply be present with their meal, read a magazine, or otherwise just zone out.

That seems like a good approach. By implementing at least one weekly quiet night, they can practice the skill of being silent with each other, which can often feel awkward at a dinner table. Plus, they have established an unspoken precedent that says: we respect one another’s personal space and setting boundaries is just fine!