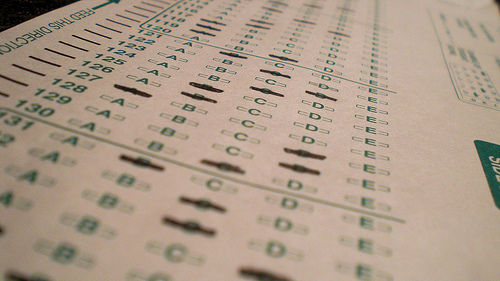 In many ways, Seattle’s Measures of Academic Progress (MAP) test reflects core problems with public school standardized testing. High school students in Seattle already take an average of four standardized tests a year, and the MAP, which takes hours to administer, monopolizes schools’ computer labs and valuable teacher time for weeks. The exams, which happen three times a year, have no stakes for the students, and so students care less and less as the year goes on, making their scores wildly variable and unhelpful to teachers. (Of course, there are even more serious issues with mandatory high-stakes testing, which, like MAP, disproportionately punish minority, ESL and learning disabled students). And, despite the company that administers MAP claiming it should not be used for teacher evaluation, schools are doing it anyway.

But at a couple of Seattle high schools, starting from Garfield High (whose graduates include Jimi Hendrix, Quincy Jones and Bruce Lee) teachers are taking a stand. Two weeks ago, they publicly refused to administer the tests, citing all the above reasons and more. In doing so, they bravely stood up against local and national school administrators, a $1.7 billion testing industry and a national policy consensus, all in order to improve the education of their students.

How did this happen in Seattle? As former Garfield student and current teacher Jesse Hagopian wrote for the Seattle Times:

“Former Superintendent Maria Goodloe-Johnson brought the MAP to Seattle at a cost of some $4 million while she was serving on the board of the company that sells it. The state auditor called this an ethics violation because she did not disclose it until after the district approved the company’s contract. After Goodloe-Johnson was fired, the MAP somehow survived the housecleaning.”

Corruption, not educational outcomes, brought the MAP to Seattle. And by taking a stand the teachers of Garfield High are resisting this corruption. But there is a broader struggle for the heart of education in the US that centers around testing.

In the wake of No Child Left Behind, an already growing perception that standardized testing was the best way to evaluate schools became federal policy. This has been a tremendous boon for testing companies, but the educational improvements are shaky at best. US students are 25th in math, 17th in science, and 14th in reading globally: and none of the countries which are ahead of the US administer multiple-choice standardized testing. And while other countries’ students are improving leaps and bounds, US students are stagnating and not making forward progress. Testing is, of course, not entirely to blame, but what has been treated as a silver bullet looks more and more like a paper tiger.

It’s unclear what consequences the actions of the Garfield High teachers will have: it doesn’t appear that they’re violating any laws or their union contracts. Ultimately, the testing companies and education policy makers rely on the teachers to administer the tests that are so destructive to classroom time. When teachers, like those at Garfield High, refuse, they are standing up for a brighter future for their students.