Coworking continues to rise in popularity across the globe, especially among freelancers and startups who want the benefits of community without the hassle and cost of negotiating leases and building out spaces.

According to the 2013 Global Coworking Census, nearly 2,500 coworking sites in eighty countries existed as of February 2013, and that number is expected to grow as technology continues to evolve and facilitate new, more decentralized business models.

Now, seats2meet.com (S2M), a Dutch workspace network that connects users, called “knowmads,” with each other and commercial spaces across cities in Europe, has developed some hard data on the value created by coworking spaces for the people and businesses who use them. 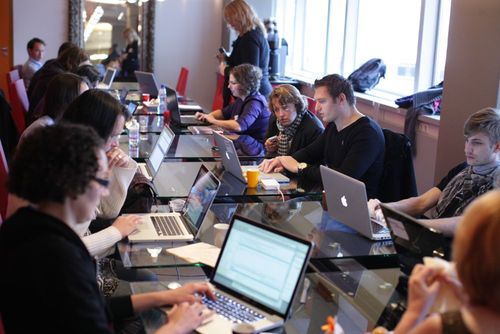 Ronald van den Hoff, co-founder of S2M and author of Society 3.0, initiated the study in partnership with Rotterdam University to put some numbers behind the idea that serendipity creates value for coworkers.

“The study was initiated to substantiate our findings that there is so much value create by the serendipitous collaboration at S2M locations,” says van den Hoff. “We needed some kind of outsider official opinion.”

The report was co-authored by Associate Professor Niki Hynes of Curtin Business School, Australia and Katrin Burmeister, Assistant Professor at Rotterdam School of Management, Erasmus University. The authors conducted a survey of more than 500 “knowmad” S2M users to describe and quantify the value they experience as a result of participating in the coworking platform.

“The most surprising result is that even more than we thought, the S2M mesh workers learn and become better professionals and create value like projects and jobs,” says van den Hoff. “It is happening at a higher rate than we anticipated, and we have just started. The whole sharing-ecosystem of knowledge could grow into the largest jobs machine in the Netherlands.”

The survey results showed that a quarter of “knowmads” have started new professional partnerships with other coworkers, and half have increased their business knowledge as a result of connections made through the S2M platform. Almost 70 percent of respondents were positively surprised by the people they met through S2M.

A majority of respondents (65 percent) characterized themselves as entrepreneurs, 10 percent were students and 5 percent were unemployed.  The most common reasons for using S2M included wanting a change of environment, not having an office of their own, and wanting more flexibility in the work environment. Users also reported wanting more interaction with others and the possibility of meeting new people.

“It proves we are on the right track,” says van den Hoff. “By facilitating the sharing of knowledge, the connection, and the engagement between knowmads and established corporations shows that our approach to offer free coworking is the right step to take.”

S2M also plans to launch a new “serendipity dashboard“ in January 2014 any location where people interact to allow people to identify other S2M “knowmads” at the location and help them connect on the basis of their expertise and interests.