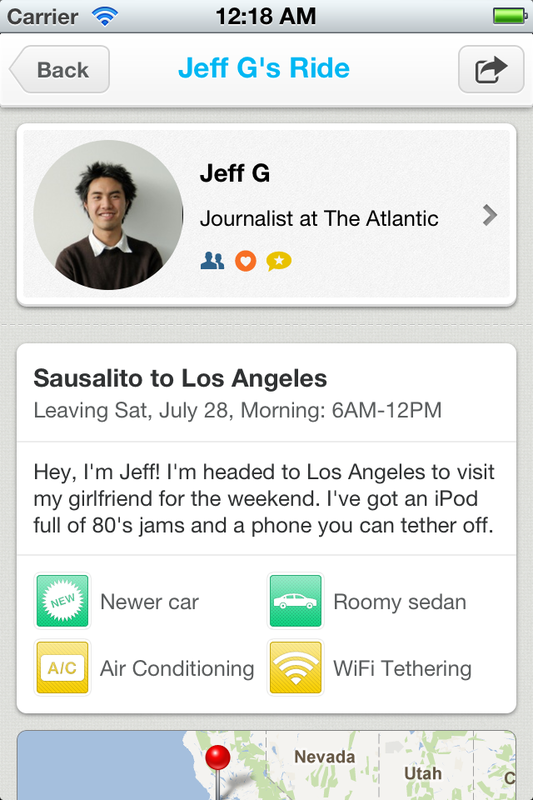 Several companies are capitalizing on shifting attitudes towards driving, the economic decline, and the ubiquity of smartphones to take ridesharing mainstream. Whether it’s the taxi alternatives Sidecar and Lyft, the Google-backed peer-to-peer car sharing service Relayrides, or the rent-just-about-any-vehicle service JustShareIt, an increasing number of services are working to make car sharing a secure, enjoyable, and even profitable endeavor.

While these various services have done much to make car and ride sharing easy, two recently released new features that take things even further:

Peer-to-peer rental company Getaround now offers its Getaway service, that will manage and optimize renting your car for extended periods of time, guaranteeing $1000 a month in income for the first three months. This could grab a new segment of the population that likes the idea of making money from their car, but doesn’t have the time/motivation to manage that process.

It also helps those that will be away from home for extended periods to offer their car for rental while they’re away, increasing lending options for customers and generating owners' income for doing nothing more than giving Getaround permission to manage their car.

This is a smart move by Getaround as a business, generating additional income opportunities, while benefitting the communities the vehicles are in, making it that much more likely customers will make the choice to go car light or car free.

Earlier today, long-distance rideshare service Ridejoy released a mobile app whose Autopilot feature does away with the biggest barrier to more people ridesharing on longer, multi-stop trips: The often elaborate logistics involved around coordinating time, location, money, preferences etc, and the ping ponging of messages to facilitate this.

As Ridejoy Co-Founder Jason Shen explained to me, all you do is specify what you want/have to offer in a ride, and what you’re willing to pay/be paid. Autopilot then automatically reaches out for you to people who match the criteria you’ve specified, spelling it out for them and allowing them to approve the transaction with a click. You can over course cancel any of the rides should you have any reservations about the people chosen.

Speaking of trust, Shen emphasized that Ridejoy has been implementing several features to build it. Among them are the ability to scan your license so that your identity can be varied, and share your picture, work & education, number of confirmed rides, etc. If you’re new to the service, Ridejoy gives you the ability to have existing users or Facebook friends to vouch for you. Further generating a sense of connection and ease is their live chat feature between potential ridesharers.

Ridejoy is growing: it tallied 1000 active rides in January 2012, now up to more than 3000. By taking the service mobile, the service is connecting people where they’re at, speeding up the process of finding a ride, and allowing users to set rides up while on the go, reducing user friction and broadening who can use ridesharing.

Readers: Have you used Ridejoy or any other ridesharing service? What’s been your experience, and would you find the Autopilot feature encouraging of you using it more? What else have you found missing that you would like to see a ridesharing service offer?

Paul Smith is a sustainable business innovator, global trend tracker, the founder of GreenSmith Consulting, and has an MBA in Sustainable Management from Presidio Graduate School in

Paul Smith is a sustainable business innovator, global trend tracker, the founder of GreenSmith Consulting, and has an MBA in Sustainable Management from Presidio Graduate School in San Francisco. He creates interest in, conversations about, and business for green (and greening) companies, via social media marketing.

Things I share: My insights, enthusiasm, and great inspiring finds from around the world.