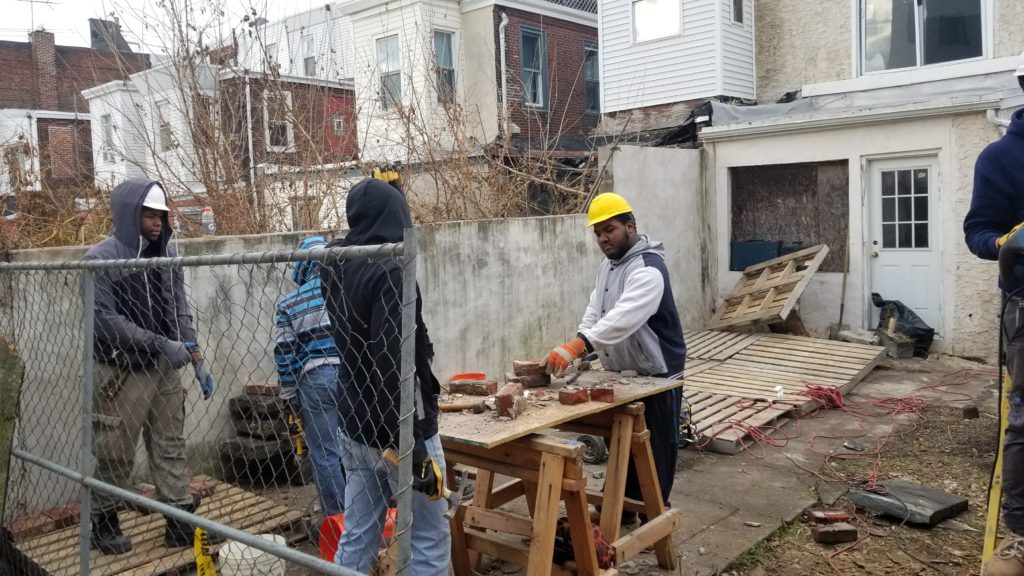 The group provides career-training programs that empower underserved citizens to revitalize blighted neighborhoods by deconstructing vacant buildings and salvaging materials for reuse. By employing grant-funded job trainees for structure removal, Philadelphia Community Corps earns a sustainable income while addressing the city’s abandoned housing blight and putting wages back into the communities from which they salvage materials. I spoke with executive director Greg Trainor about how the idea was sparked, executed, and evolved into a sustainable business model.

What sparked the idea for Philadelphia Community Corps?

The original idea came while I was reading “A Prayer for the City” by Buzz Bissinger. I was reading about the scale of the abandoned housing problem – that there are 40-60,000 abandoned, vacant, or blighted houses in Philadelphia. The idea was to create an organization that could take on the abandoned housing blight block by block, neighborhood by neighborhood. Then while we’re at it, why not utilize deconstruction as the methodology to salvage as much as possible for reuse? And why not make it a job training program?

Most industrial cities in the country have large deconstruction job training nonprofit leading the way to grow the market in their region. I didn’t have to look far to find dozens of examples of organizations doing just that elsewhere, so I took inspiration as often as possible from those existing organizations during the ideation and planning stages.

Once you had the idea, how did you begin to execute it to make it a reality?

We launched in 2011 as a grassroots effort through smaller projects like neighborhood cleanups, but we could never figure out how we’d be able to afford workers compensation insurance to do deconstruction in Philadelphia. The epiphany, in 2014, that made it all work was changing our mission from neighborhood revitalization to job training. The definition of success in job training is much more attainable and scalable.

We weren’t changing neighborhoods anymore, which was a hard compromise for me to accept, but we were helping people get jobs in construction. The key difference is that this change allowed us to partner with other job training programs that had funding that would take us years to develop on our own. So now we’re half contractor, half nonprofit. We have a social mission but we’re business minded. One of our unofficial mottos is “making it cost effective to do the right thing.”

How do your various programs intersect?

Philadelphia Community Corps is our deconstruction job training program. We also have an architectural salvage warehouse store called Philly Reclaim. You can’t have a deconstruction company without a distribution channels for all the waste you’ll divert from the landfills — a building material reuse center, or you’ll bury yourself in salvage like a hoarder. Likewise, the building material reuse center on its own wouldn’t be able to salvage the inventory it needs, or have any charitable purpose to its revenue without the job training program.

The goal is to build a nonprofit that is financially sustainable and resilient to market changes, but that only works if we can raise money because we generate so much reusable building material that we have to sell it almost at a loss to keep our warehouse from overflowing, which is great benefit to the local builders), and we need to supplement that earned income with donations and grants if we’re going to grow from here.

Is this a business model you have seen in other parts of the country or world? Have you — or do you expect — to see this model replicated?

This business model has been successfully utilized across the United States in nearly every other formerly industrial city. Philadelphia is way behind the curve on growing its deconstruction and reuse industries. My favorite example of this is Baltimore, which is very similar to Philly in terms of the challenges they have, except they’re almost one-third of the population of Philadelphia. Yet Baltimore has four large and successful deconstruction nonprofits.

My expectation is that as we create more channels for waste diversion for reuse you’ll have both the carrot, which is the money to be made by entrepreneurs that can innovate ways to profit off that waste, and the stick, which is environmental regulations making it more and more expensive to dump reusable materials in a landfill. We need both. The emerging deconstruction industry will merge with the existing demolition industry as it’s pushed into more sustainable deconstruction practices.