Whistle While You Work: the (Not So) Surprising Happiness of Coworking - Shareable
Skip to content 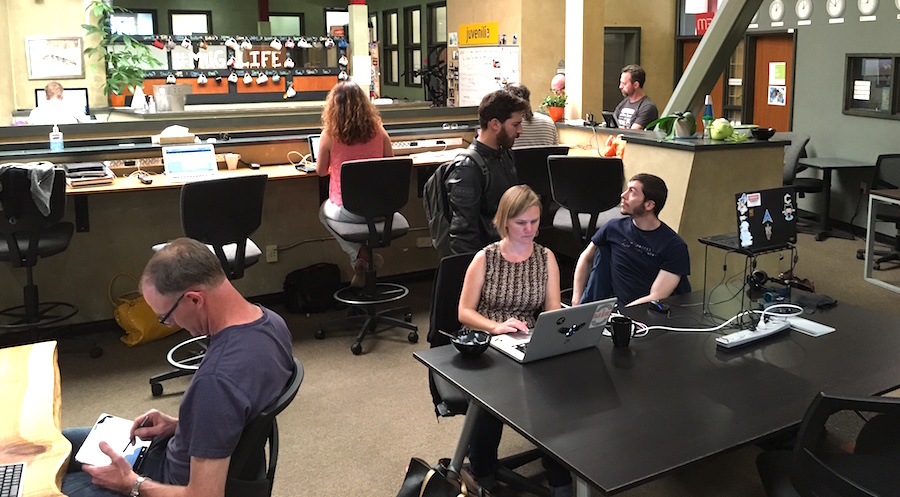 In a 2015 member survey of the global coworking community, 89 percent of respondents stated that they were happier due to coworking. This impressive stat comes as no surprise to coworking insiders, who understand first-hand the positive impact coworking can have on people.

Steve King, partner at research and consulting firm Emergent Research, says putting numbers on happiness is no easy task but that coworking has shown to enhance social experiences, enable more networking, and provide opportunities to learn new skills—all of which can lead to increased happiness.

“Happiness is a hard topic for us because it’s pretty squishy,” he says with a laugh. “We’re data people, but the truth is, there’s a whole body of research in the last five years about happiness and work. The more researchers dig into it, we’re discovering what Mary Poppins and Snow White knew all along, that the more productive you are, the happier you are—with a spoonful of sugar and a whistle while you work.”

“The number one complaint from people who work from home is loneliness,” says King. “When you talk to people who worked at home and have gone back to a traditional work environment, they’ll often tell you it was loneliness and the lack of a social environment that pushed them back to traditional employment…We’re not at our best unless we’re happy at some level and we’re not happy unless we have relationships with other people.”

King acknowledges that they did discover what he calls hermitpreneurs—people who don’t want interaction with others—but he estimates that these people only make up about seven percent of independent workers.

That happiness boosts productivity makes sense, and there’s data to back it up. A study by economists at the University of Warwick found that happiness led to a 12% spike in productivity, while unhappy workers proved 10% less productive.

This intersection is where coworking shines by enabling happiness and productivity in one package. Fast wi-fi is great and cool desks are nice, but happiness is an even stronger driver of productivity, which leads to a better sense of self. As King puts it, “Happiness comes from feeling good about yourself every day.”

The need for workplace community is something the Emergent Research team saw in coworking space members of all types, from freelancers and independent workers, to telecommuters working remotely for a company, small businesses and startups. They all responded that it was very nice to have a broader social network. This points, in part, to a larger need for more community ties, traditionally found through things such as churches and local groups.

While community is driving coworking from the inside, the face of coworking is changing. Once driven almost exclusively by independently-owned spaces, corporate coworking has emerged as a macrotrend, with a rise of corporately-owned spaces and a growing number of companies looking to coworking spaces rather than traditional real estate to avoid being locked into a 10 year lease.

Recently, office supplies retailer Staples partnered with Workbar to create coworking spaces in several of its locations. Last month, Verizon and New York-based coworking company Grind opened a new coworking space inside Verizon's former headquarters building at 140 West Street across from One World Trade Center. What the future holds for coworking remains to be seen.

At the upcoming Global Coworking Unconference Conference (GCUC) in Los Angeles, which runs May 3-6, King is presenting a session on the future of work and how coworking fits into it. The conference, which has its roots in a casual meetup in Austin, Texas, has grown into an international conference series, with events in China, Australia, Southeast Asia, Brazil and Canada. It provides a unique opportunity for the global coworking community to connect in real-life to share resources, ideas, best practices, challenges, and visions for the future of coworking.

In his session, King plans to talk about how technology and global competition have combined to shift the way industries and companies are organized, including the growing use of partnering third parties and contingent workers. He’ll also explore the atomization of work, where work is being parsed down into smaller and smaller units, and what these things mean for coworking space operators and members.

This segmentation is a natural evolution for any industry if it grows big enough and is successful enough, King explains. Coworking is already hybridizing and segmenting to serve different markets and communities around the world.