This is the introduction and a sample chapter from The Producism Manifesto: A New Game For A New Economy, authored by New Economist/Tech Social Entrepreneur, Drew Little. He's also the founder of the sharing economy startup, Producia. 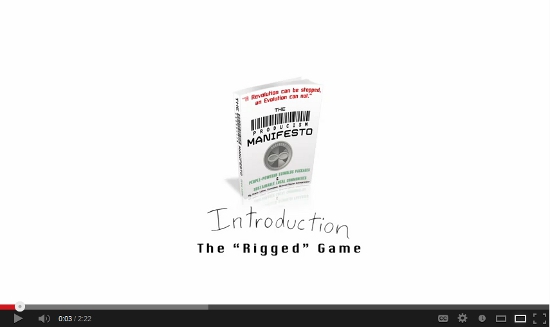 One conversation has the power to change how you think about everything. Are you ready to start that conversation?

According to renowned psychologist, Abraham Maslow, an individual's ultimate need is to self-actualize, or to reach their full potential. Self-actualization is just like a seed eventually growing into a flower. However, the majority of the population is at the bottom of the Maslow’s pyramid; which can be seen in the inequality of wealth.

For example, by 2010, the top 1% of Americans possessed 35.4% of the national net wealth (property, stocks, assets, etc), while the bottom 95% held 36.9% (Source). Regarding financial wealth, the top 20% of the population controls 93%, while the bottom 80% only controls 7% (Source). There are a multitude of barriers in the way of people gaining the wealth necessary to reach self-actualization, as it seems, the main barrier is our current economic system.

What is a System?

A system is a combination of various parts that form a whole in an orderly fashion for a definite purpose. If we look into it, a game is really a living system. Let’s break down what a system is again and compare it to a game.

The parts that form a game are the players, game mechanics, game dynamics, and aesthetics.

Examples of game mechanics are points, levels, and progress bars; the building blocks of a game –  ways to provide feedback to the player.

Examples of game dynamics are tasks or challenges that are rewarded when completed; action-oriented motivations.

Aesthetics are the side effects players experience when playing such as expression, discovery, fellowship, and challenge.

…in an orderly fashion...

…for a definite purpose.

The goal(s) of the game

In this game we are born in, people and organizations are the players, points are money, levels are socio-economic groups, badges can be material wealth or credentials, tasks can be people going to work for 8 hours and getting rewarded with wages, and so on. The rules are hidden to most people, however, once you've become aware of them, the world has a brand new view. Instead of having the sole viewpoint of a player, you now have that added advantage of also having one of a game designer.

It’s like analyzing an ant farm instead of being one of the ants. You see how the maze is structured, the dead ends, the traps, stores of food, etc. You see how the ants are divided into colonies. You also notice how they react to rewards. Most of all, you see a system running on its own. The ants aren't being physically forced to do anything, yet they voluntarily play their part. Every ant farm has a designer(s) who studies the behavior of the ants. Essentially, the designers regulate the ants’ lives through a subtle force which we can call a system (or a game). The ants are so caught up in it that they don't realize they're being guided through a journey. I use this analogy because it’s very similar to how humans function in society. I believe games are very powerful. For that reason, I’m going to share a secret with you as to why I feel that way.

A game is the only way to get people to take predictable action without force. (inspired by Gabe Zichermann)

The goals of this book are to help you become aware of the problems of the game we’re currently playing, and how we can create a new one that removes the barriers to self-actualization. Yes, there's a way to make it happen without starting any violent revolutions or breaking any laws. However, in order for this to happen, we need to put on a new pair of lenses. We'll need to view society from a designer’s point of view; just like the ant farmer.

I would like for you to use your imagination with me for a moment. Consider the following: Imagine America was a startup and was starting over from scratch. After understanding the systemic problems of the economy, how would we design a new economic system that's focused on sustainability, created a level playing field, and enables people to engage in a form of autonomous work that is aligned with their talents, values, and purposes?

– with no employees only worker-owners, where all workers experienced ownership in the companies they were a part of

– with no poverty, unemployment, and money-related crime

– with no financial crashes

– with an educational system that was personalized to each student, fun, engaging, and stimulated left AND right brain learning

– where we personally knew who we were doing business with

Does this sound too good to be true? I understand if it does. We've been stuck in an old game for centuries and we only know what we are exposed to. The concepts I'm going to share blew my mind once I became aware of them. I was surprised as to how this information wasn't taught in the majority of schools and didn't receive as much media coverage as the financial crisis we are in. Then, I remembered that the status quo is kept in place for a reason.

In late 2011, we saw what the Occupy Movement did. People finally came together to show the world that they were tired of the economic and political inequalities. To use a business analogy, I look at Occupy as the "PR Campaign" of the movement towards economic change. It helped people become aware of the problems and begin creating dialogue around them. However, there wasn't a coordinated effort to create a comprehensive solution that addressed the systemic problems of our economy, or using the business analogy example, no "sales" were being made; which keeps the "business" sustainable and operating.

Many anti-capitalists proclaim Socialism as the answer. Unfortunately, many people don't understand that in our current economic system and in Socialism, there is only one monopolized currency that can be accepted for taxes, which is created out of compound interest debt, and is the root cause of our unsustainable economic system; currently, the private sector has a monopoly on legal tender like the government does with Socialism. So, by instituting Socialism, we might change the "driver" of the "car," but the root problem still exists so constant "repairs" or corporate bailouts are always going to be needed.

Many anti-capitalists also feel a bloody revolution is needed. But let's get real, the U.S. government has too many resources at its disposal; spending more on the military than all other developed nations combined. So that's not an intelligent decision. Many well meaning citizens feel change can be made within Washington. Unfortunately, as history shows that isn't going to happen either. What is there left to do? What if we agreed to play a new game instead? One that doesn't break any laws, is opt-in, and fills in the gaps left by the old game. It wouldn't require a revolution that sheds blood, but the shedding of economic ignorance…Essentially, it requires a revolution of the mind.

We dare to imagine an alternative and act on it

Producism is an evolutionary economic model that is designed for the Digital Age. It combines 11 new economic concepts for the goal of  revitalizing local economies and communities in a fun and easy way. I say easy because an economic template has already been created for us with the old game. The hard work has been done, we just need to add a few tweaks to get it right (I'll get to the fun part in a minute).

Let me make this very clear, Producism is not a new extreme. It is about balance and integration – filling the gaps that are remaining in the current economic system as a means to enhance the best practices that are already existing. It’s about bringing in the parts that have been left out to balance the whole. This is not a new extreme, it's a new balance. You have Socialism on the left and Capitalism on the right, and Producism in the middle.

It is an economic science, not an economic philosophy. It focuses on how to repair local economies, not why the problems exist. It's a way to convert individuals' anger toward "The Man" into something productive. It's about replicating an economy that's been sustainable for ages, nature. It's about imitating a living cell that's in our body (a cell produces more than it consumes; which is sustainable for our body- a cancer cell consumes more than it produces, which is unsustainable for our body). It enables local communities to create their own stimulus packages. You can think of it as a decentralized social capitalism that is focused on localism, creative sustainability, and collective economic empowerment. It provides a way for people to self-organize a new, parallel economy. And last but not least, it enables those who choose to participate, to become an impactful social entrepreneur to eventually self-actualize in a sustainable world.

– People experiencing ownership and self-sufficiency; especially in a form of work that an individual has a passion for

– Profit not holding more importance than people and the environment

– The commons not being commodified