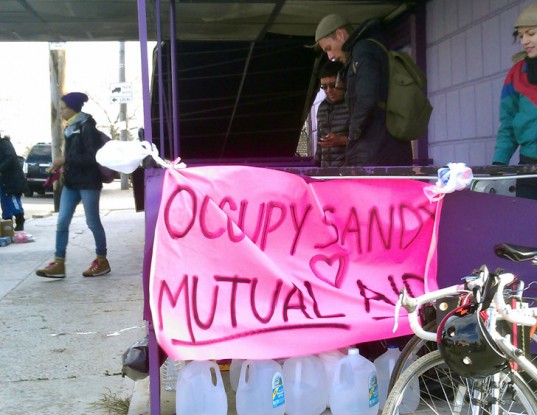 While many in New York City are back to work and some kind of normalcy after the storm, the devestation wrought by Sandy continues in many parts of Brooklyn, Queens and Staten Island. 21,000 are stuck in NYCHA public housing projects with no power, no water, no heat and no resources. The destruction in Staten Island and the Rockaways has been overwhelming. And people in these neighborhoods are reporting that the Red Cross, the city, and FEMA have been very slow to respond.

Occupy Wall Street, on the other hand, has been doing relief work since the day after the storm. Using the social networks built last fall, and the organizational skills learned at Zuccotti and elsewhere, occupiers are stepping up into the breach left by the government, NGOs, and charity organizations which normally provide disaster relief. They have dubbed their efforts Occupy Sandy.

They have set up bustling donation centers in ten different neighborhoods throughout the city, where volunteers work day and night to organize and ship out the huge volume of donations coming through. They have been on the ground, organizing volunteers to clean flooded basements, canvass to see where help is needed, distribute donations and man free stores. And they have been building solidarity networks in neighborhoods that will be recovering for months, perhaps years to come.

Many have covered the incredible work being done by volunteers, and I'd like to reiterate support for everyone who has dropped what they were doing to go help those who need it most. If you're interested in helping out in the New York City area, you can visit this website to see what needs doing.

But a challenge remains: how does Occupy turn its aid work into the sort of political movement and mutual aid network that, for example, was built around Common Ground, an anarchist organization that sprung up to do Katrina relief in New Orleans? There is an implicit problematic with charity work: it can solve a temporary problem but can never be the base for real, long lasting change, and all too often reinforces the status quo. If Occupy Sandy ends up just being the People's FEMA, then it will have failed to live up to the disruptive, revolutionary potential of Occupy.

So far, though, there is still so much work to be done, and it is great to see Occupiers step up to do it. If you're a New Yorker, you should consider volunteering to help people still suffering from this megastorm.