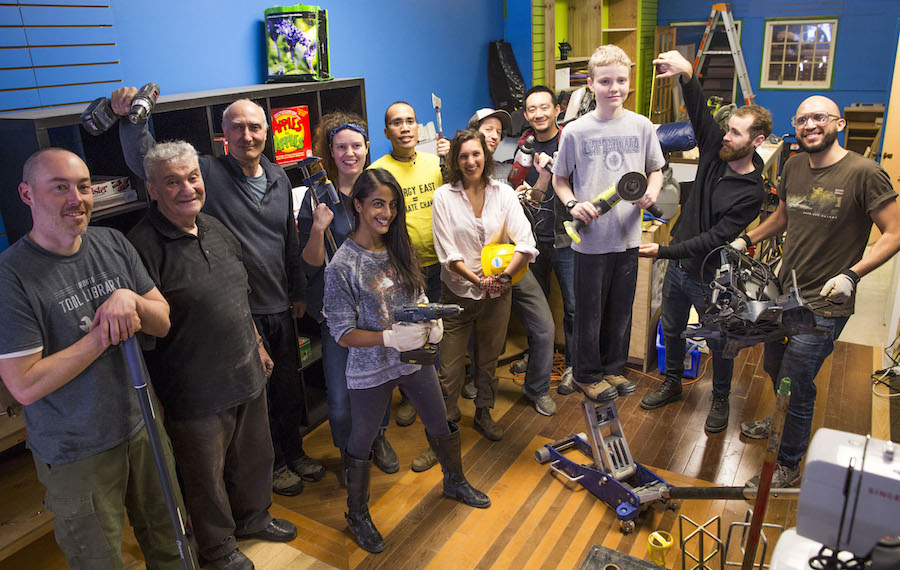 Cat Johnson|April 10, 2017March 4, 2019
The Toronto Tool Library in Ontario, Canada, is a model tool lending program. With four locations and a variety of workshops and community events, it is a pioneer of the lending and sharing movement. In April 2016, the Toronto Tool Library team raised the bar again when they launched the Sharing Depot, Canada's first Library of Things, where members can borrow sporting goods, board games, camping equipment, children's toys, and party supplies for $50-$100 per year.
Building on the success of the first location, the Sharing Depot team recently opened a second location. We spoke with Lawrence Alvarez, president of the Institute for a Resource-Based Economy and co-founder of the Toronto Tool Library and Sharing Depot, about the growth of the Sharing Depot, the community's response to the project, and the strengths and weaknesses of the membership model. Here are the highlights of our conversation.
Cat Johnson: When we spoke last year, the first Sharing Depot had just opened. How are things going?
Lawrence Alvarez: Toronto has risen to the occasion of having a Sharing Depot. Canadians are very outdoorsy people. We've got beautiful national parks and people going to music festivals are coming to our space and using the tarps, tents, sleeping bags and stuff like that. The camping equipment is, world's away, the most popular thing. We've also had a lot of success with children’s toys. The donations keep pouring in for those and we can’t keep up.
How do you handle all the donations?
It's a delicate balance because you really want value the people who are bringing the things, and encourage their behavior. At the same time, a lot of the things they give us are destined to not be used for anything and just get recycled.
We're happy to do some of that work, though it's beyond our capacity to process a lot of stuff. We'd like to be a dropoff for some hard-to-recycle things that we can process through our tool fixers. We're more or less accepting almost everything. As long as it's in good working condition and it looks good, we're accepting it and then processing it in the back and taking it from there.
We try to not turn away too much, although I'm quite aggressively turning away hand tools right now. I don't know how we made so many hammers on planet Earth, and that's just Toronto. 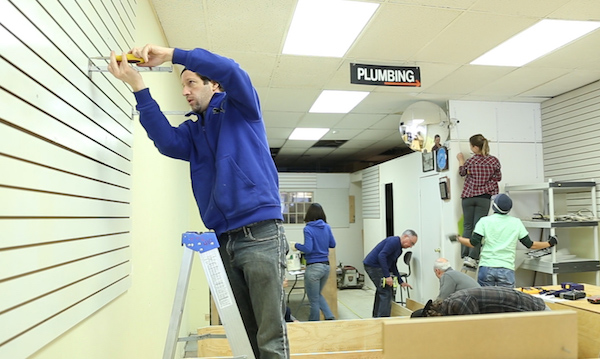 The Toronto Tool Library team and a group of volunteers transformed a hardware store into a second Sharing Depot location. Photo courtesy of Toronto Tool Library/Sharing Depot
Were you surprised the camping gear is so popular?
I was kind of surprised. I thought the sports things would be the most successful, followed by board games. But it's been the opposite. Sports is a formula that we must still unlock. They really didn’t take off as I thought they would.
I'm from Zimbabwe so I was a Cricketer growing up. I got the local Cricket Association to donate two full cricket kits. That's a lot of money, and a lot of equipment, but they have not even been used once. Basketballs, softballs, bats go out sporadically, but not as much as I originally thought.
Now there's a second Sharing Depot. What was behind the decision to open a second space?
We had a Downsview tool library location that was opened in 2015. It was in a public library in a smaller community with a lot of apartment buildings and condos. We were in the back and, due to location, the membership wasn’t there.
We looked at the Downsview branch and thought we could use the resources better. Fortuitously, we got a call from a supporter that a hardware store was closing down. We were invited to look at tools and all the things they had, thinking maybe we could do a bulk buy. We started asking about rent, which was reasonable, and it was a great location.
The public library offered us another branch, except it was going to be in a basement. We brought the whole team in and asked ourselves, "Do we want to keep moving to basements?" We're in a storefront now with the Sharing Depot and it's explosively successful. We have to go that way. We can't take a step backwards, we’ve got to go forward. We've got to take this business risk. It's a risk, but the reward is so huge were this to succeed.
We surveyed the neighborhood, we talked to people, we put it out there for donations and got about $4,000, plus the Rotary Club gave us $5,000. We moved the Downsview branch tool library to this location and we had an intense three weeks of renovations to flip the space from a cluttered, uninventoried hardware store that was just insane — with kettles next to bottles of acetone which were next to screws — into community hub. On the first day, we sold 10 memberships.
I think this is going to be a good neighborhood. There's tons of walk-in traffic, it's got a great public transit line, the neighborhood has a really strong neighborhood association that holds them all together, there's a huge apartment building going up across the street from us. I think there's a hunger for something like this in that neighborhood. We're seeing the support from the community and I feel very hopeful. 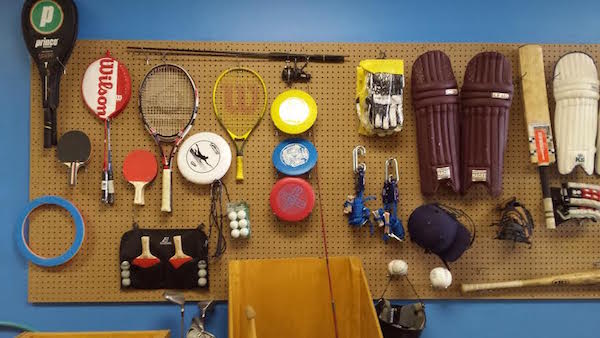 Sports equipment borrows didn't take off as expected. "Sports is a formula that we must still unlock," says Lawrence Alvarez, co-founder Toronto Tool Library. Photo courtesy of Toronto Tool Library/Sharing Depot
How is the membership model working?
We are still about 30-40 percent reliant on grants. Our main funder is still the Ontario government through the Ontario Trillium Foundation. In the time since we spoke last year, we've put in an application to become a charity in Canada.
It's so difficult to be completely sustained by our memberships, our youth programs, our makerspaces and our workshops because the goal of the organization is to make all those things as accessible as possible. We want to lower the price, always, as much as possible. We just don't want to drive anyone away and we’re still giving away lots of memberships for free.
I had to take a full-time job recently. It is a labor of love still, but, once we get charitable status, about 90 percent of the grants available in Ontario, Toronto, and Canada, are exclusively available to charities. If we can get in that stream, I think we can find big funders and we can also give charitable receipts so that will make us more attractive to donors. My one to four year goal is to be employed 100 percent by the organization.
What are the benefits of the membership model?
It's really important that people feel invested in the entire project. The membership model is like an anti-theft mechanism. When someone is a member, they're part of something. They own the access to it as much as anyone else. They're a card carrying member, which is a little bit exclusive. 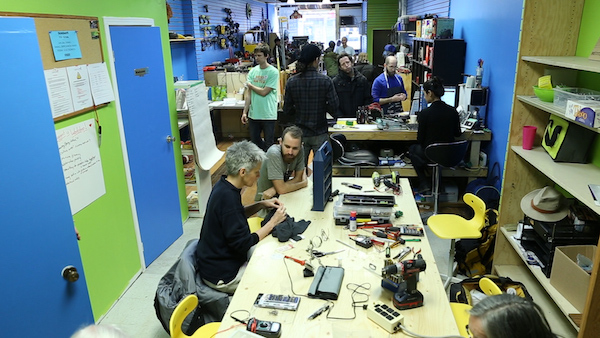 Toronto Tool Library locations host workshops and events, including repair cafes. Photo courtesy of Toronto Tool Library/Sharing Depot
Do you think you're shifting people’s minds about ownership?
It's so gratifying to be part of this project. People never have a bad thing to say about it. It's like you're managing disbelief. People come in and say, "All of this, for only $50, for a year? Why are you doing this?"
I love that. When someone comes in and they're shocked and happy and grateful, there's something they show of themselves that's like a vulnerability when they show that they’re happy and grateful. For me, that is the right moment to tell them that the mission of the project is far larger than just putting tools in their hands. This is about the planet that we live on. This is a climate change project at its very heart.
This is about production and consumption. This is about, 100 years in the future, what are those humans going to use to build their world, and how totally unfair it is of us to use it all. And how, just by being here, they're a part of that. So I thank them for being here. I celebrate them. I make sure they feel like they are part of the solution just by taking out one tool. It's not enough — I want to make sure that they understand that — but it's a great step in the right direction.
What's the biggest challenge for the Sharing Depot?
The biggest challenge is human resources. Just having the people power and the time to throw behind some of these big ideas that we have — some of these big directions we want to take it. There are so many things we could be doing, and reaching so many different communities. There's just too much for the team we have.
What are some of the lessons learned from this project?
Location is extremely important — picking the right neighborhood. With this location, we really went into the community. We spoke to the neighborhood association, we chatted with store owners, we talked to people and did things on social media. I feel confident because we did a lot of homework before pulling the trigger. Already it's proven it's very popular
Another thing is, if you build it, they will come. Location is important, but if you make it they'll come. If you take the risk, what do you have to lose? I mean it's only the future of the planet.
Header photo courtesy of Toronto Tool Library/Sharing Depot. Follow @CatJohnson on Twitter.