NeighborGoods Comes to Your Neighborhood! - Shareable
Skip to content 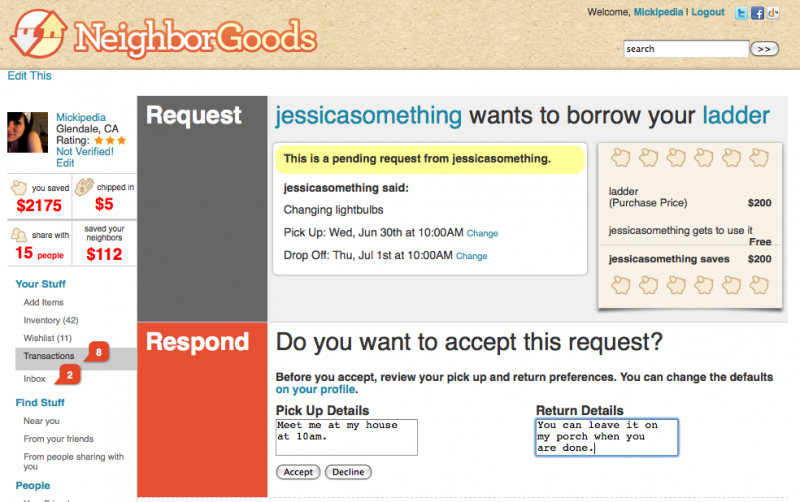 We at Shareable.net are great fans of Micki Krimmel, who has written for us about the dog park as a commons as well as her new project, NeighborGoods, while it was still developing in Los Angeles. We're pleased to help announce that as of today, NeighborGoods is coming out of beta and into your neighborhood:

Los Angeles, Calif., June 30, 2010 – Los Angeles based startup, NeighborGoods.net announced its national launch today. Previously only available in Southern California, NeighborGoods opened its community to people across the country so that all Americans can save money and resources by borrowing and lending with their neighbors instead of buying new.

The nationwide launch comes on the heels of the global economic crisis when Americans are increasingly calling for an overhaul of the financial system. Meanwhile, cash-strapped Americans spend $22 billion a year on self-storage. According to The Self Storage Association, there is over seven square feet of self-storage for every man, woman and child in America. NeighborGoods was created to extract the latent value hidden in all that stuff. By connecting neighbors to get more use of the stuff they already own, NeighborGoods provides a way for communities to save money and live more efficiently.

The idea for NeighborGoods began to take shape a couple of years ago, when NeighborGoods founder Micki Krimmel purchased a travel pack for a trip to Thailand for about $200, knowing that she would only use the item once or twice. She took inventory of all the stuff she owned and realized the same was true for most of it – she spent a bunch of money to own something she only needed occasionally. After a bit of research, Krimmel learned she wasn’t alone. People across the country are over-laden with stuff they’ve purchased but don’t use very often.

Krimmel put a small team together and launched a test version of NeighborGoods a few months ago. Since then, members have added over $750,000 worth of inventory to the network and NeighborGoods has received a great deal of attention from the press. Krimmel and NeighborGoods have been featured in O Magazine, TechCrunch, GigaOm, Apartment Therapy, and countless other blogs and websites. Krimmel has been most inspired by the feedback from users and potential users. She says, "The most common request we get is 'Bring NeighborGoods to my town!'" In response to widespread demand, and following their successful test in Los Angeles, NeighborGoods launched nationally today with a bold mission of improving neighborhoods across the country.

"When we share our stuff, we get so much more for our money, we reduce waste, and we strengthen our local communities," said Krimmel. "Not only does NeighborGoods provide a way to save a little bit of money – it also connects neighbors in meaningful ways making for happier, healthier neighborhoods."

NeighborGoods even has a group just for Shareable readers! Join today and see what it's all about.

Watch This Intro Video! from sparky rose on Vimeo.