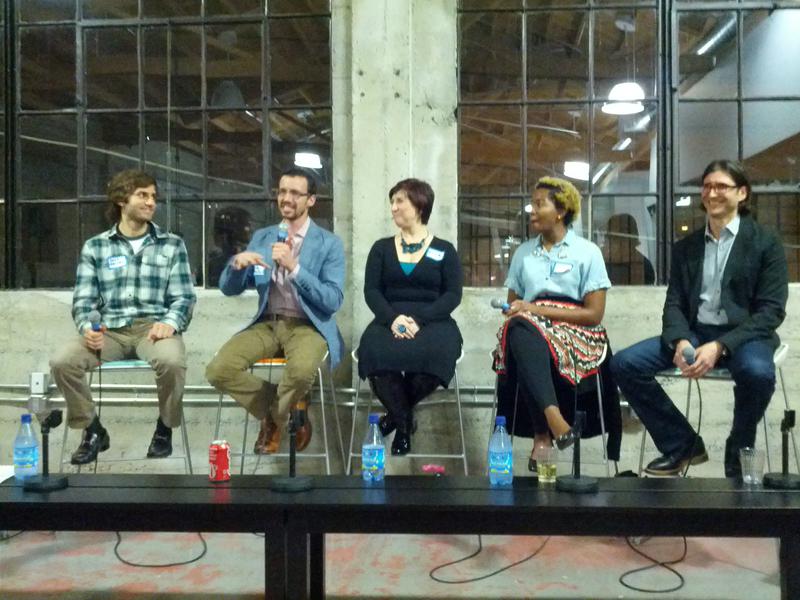 At last night’s Collaborative Chats at Wheelz headquarters in San Francisco, moderator Emily Castor featured a different voice in the sharing economy – the power user. Maybe you’ve thought about this group and suspected that the majority are recent college grads struggling to make ends meet. Well that certainly wasn’t the profile on the panel.

Take Danielle Izsak, a full-time market educator for skin-care company Murad. In her spare time, she’s an avid driver for Lyft, a peer-to-peer, real-time ridesharing service in which she picks up passengers in her own car – with a signature pink mustache on the grill; most of her earnings are being stockpiled for her upcoming destination wedding. As someone immersed in retail, she says working for Lyft has “restored my faith in humanity.”

Then there’s Nick Crawford, a husband and father, who is currently making 100% of his income through services like TaskRabbit and SideCar. An arborist, Nick and his family moved to San Francisco from Milwaukee in April of this year and he was unable to find work that could pay the bills. Moreover, in order to perform landscaping and tree care in California, he needed two separate licenses, the cost of which was significant. After a TaskRabbit he hired to help paint his house canceled at the last minute, he decided that he would be the best Rabbit. How much does he make? Quite the resourceful Rabbit, he uses multiple peer-to-peer services to get the job done and maximize income. When he was hired to move a dresser from San Francisco’s Marina neighborhood to Reno, NV (a 200+ mile trip), he raked in $275 from the dresser’s owner and then found passengers on Zimride for both legs of the trip, collecting an additional $75.

When discussing the peer review systems across these platforms, it became clear that although power users live and die by them, they’re not an accurate reflection of quality. “Symmetric feedback systems [in which both parties review each other] lead to retaliatory feedback,” claims Simon Rothman, Executive in Residence at Greylock Partners and former head of eBay’s US operations. Power user, fashion blogger, former Facebook employee and Threadflip enthusiast Adelle McElveen cited the time a parent on UrbanSitter (which does not have a symmetric feeback system) incorrectly gave her a bad review and the company sided with her and removed it from the site. Technology evangelist and two-time national skeeball champion Joey “the Cat” Mucha has hosted over 40 Airbnb guests, rendering him a “Super Host.” He says that when he’s given a driver four out of five stars, they’ve questioned his feedback. Similarly, Simon gave a Lyft driver who got lost on their trip a higher rating than he felt he deserved because the driver was nice.

These power users shared the sentiment that for them, it was the connection – not just the money – that keeps them engaged. Simon recalled how a driver discovered where he worked and now has a meeting with him – this particular Lyft-er told him that he uses driving as an opportunity to network. Nick has received Facebook friend requests from his SideCar passengers and has some regulars. And what about the fist bumps shared by all Lyft users, an emblem of belonging to a culture?

This personal and hyper local connection is what differentiates collaborative consumption companies from eBay, one of the early peer-to-peer marketplaces. Simon emphasized that eBay didn’t help users fundamentally find more trust in each other and this was partly because they were interacting across states rather than blocks. Additionally, eBay was really focused on transactions while collaborative consumption companies are about experiences, creating a ripe environment for stronger trust and more passionate communities.

Interestingly, when one panelist compared her experience as a Lyft passenger to riding in a cab, she referred to the latter as being dirty and unpleasant. But is there really a difference? Many cabbies are friendly, have clean vehicles and, perhaps most importantly, know their way around a city. This comment evokes one of the warts of the sharing economy – users tend to want to engage with people just like them. They might think, “a person driving his/her car to make extra cash on a hip, technology platform is probably just like me, but a cabdriver could be anyone.” While we should indeed be celebrating these innovative and forward-thinking companies that help us make and save cash, let’s be careful not to do it at the expense of people who earn their livings in a more traditional, peer-to-peer way.

The California Public Utilities Commission recently issued "cease and desist" letters to Lyft, SideCar and Tickengo, claiming they need to secure the proper licenses as "charter-party carriers." If you disagree with this regulation, take action by signing this petition.

Ali Hart is a media strategist and content producer with a passion for behavior change, collaboration and storytelling. Her background in the Entertainment industry, penchant for humor and MBA in

Ali Hart is a media strategist and content producer with a passion for behavior change, collaboration and storytelling. Her background in the Entertainment industry, penchant for humor and MBA in Sustainable Management from Presidio Graduate School are Ali’s secret weapons in her quest to make sustainability inconveniently fun. Follow her: @traHilA