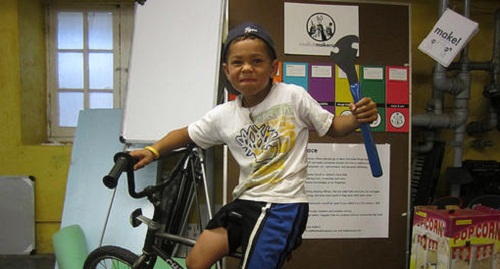 I went to a meeting at the "World Famous" Church of the Messiah for the Detroit Community Cooperative, a worker coop business incubator and a coop of small businesses that aim to support each other. Still in it's early stages and with limited funding, this program is aspiring to develop the Mondragon of Detroit.

I showed up early and a churchgoer named Craig, bubbling with enthusiasm for what he was about to show me, brought me down to the basement of the Church, which turned out to be a maker space, called Mt. Elliott Maker Space, with a strong emphasis on youth, job skills and microenterprise development.

Pastor Barry allowed some neighborhood folks and a community association who pitched in, to build out the space for an earn-a-bike program, a community tool  workshop space, a computer learn and build lab, screenprinting program, and more. An 11 year old girl recently learned soldering and now she's teaching other folks at the makerspace.

There is a small company blossoming there, reusing wood from abandoned Detroit houses and making them into high end furniture to provide much needed local jobs, possibly as a worker coop.

Craig said it's the only bike shop, much less community bike shop, on that side of town. Particularly helpful now the city is coming close to shutting down the majority of its bus service, even though the temperatures drop below zero in Michigan. At least people can get to work if they need to on bike. They can to come to the Church of the Messiah and learn how to fix and build their own bike.

John, an immigrant from the San Francisco Bay Area, who helped build out the space and is developing the furniture business, praised Detroit as the only place he'd want to live. "You can do pretty much anything you can imagine here," and "no one cares."

I hope someone cares, because Detroit for all its resiliency, with a nearly 50% unemployment rate, could use a lot more of these kinds of inspiring projects.