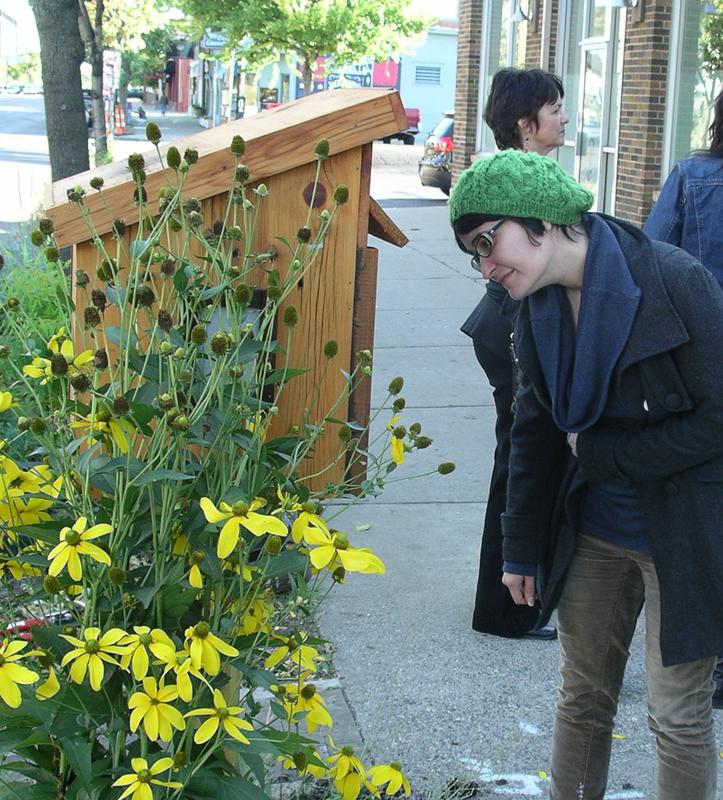 You can boost literacy, neighborliness and the commons all at once with a Little Free Library. It’s such an ingeniously simple idea, you wonder why no one thought of it until now. You take a book or leave a book (or both) at Little Free Libraries, which “look like birdhouses and act like water coolers” according to the Minneapolis Star Tribune. They are popping up all over Wisconsin, moving into Minnesota and have been reported as far away as Chicago, Toronto, Colorado, Oregon, California, British Columbia and Mexico.

The idea began with social entrerpreneur Todd Bol who built the first one in his home of Hudson, Wisconsin and kept right on going. He soon teamed up with his friend Rick Brooks in Madison to form the non-profit group Little Free Libraries to spread the idea. They are well on their way toward fulfilling the goal of establishing 2510 new libraries around the world, outdoing philanthropist Andrew Carnegie. The group emphasizes that these institutions are in no way a replacement for traditional and public and school libraries. Brooks tells the story of Little Free Libraries and how you can get involved in the story below.

Little Free Libraries are small structures that serve as an informal book exchange. Usually positioned atop a post in someone’s front yard, by a bike path or in a park, they seem to have an almost magical effect on people. Once people realize that they can “take” any book they want, they also become aware of a desire to share their favorite reads.

Little Libraries serve a function bigger than just distributing free books. Mothers tell us their children are as eager to take their books to the Library as they are to take them from. One fellow who put a Little Library in his yard affectionately recalled his desire to get up several times the first night and pat it on the roof. Down the street, a woman admits that the Library near a garden on her block “made me cry… because it was such a nice and positive idea.”

Of course, such an unprecedented idea raises questions.

Won’t someone steal the books? They ask. No. You can’t steal a free book.  Won’t troublemakers vandalize them? Well, maybe, but mostly not, especially if they feel as though their Little Library comes from someone they know and belongs to people they care about. The only incident to date, when a door was removed from a new Library in a public park, had its own remedy. One neighbor found the door and another repaired it the next day.

Can you put one in a park, a public bikepath or even the sidewalk? Park officials may worry about establishing a precedent in a public space. To date, the founders and patrons of Little Libraries have finessed such issues by finding non-publicly owned locations next to or across the street from parks and bike paths. The Libraries do not carry advertising. They are safe. Each Library has a steward to watch out for it; a contact person to call if there is a problem. Donors and borrowers check in almost every day. They don’t have to wait for a maintenance person or city employee to fix whatever seems amiss.

But who has the right—privilege or obligation—to be the steward? Almost anyone can do it. All you need is a good heart, a sense of responsibility and awareness of the interests of your neighbors. Some fifth grade boys seem particularly good at it because they feel needed. TimeBank members and moms as well as members of the Neighborhood Library Builders Guild (who construct many of the Libraries) are proud to protect their creations.

Questions like those, to be frank, are more institutional and legal than the more important matter of why such a simple idea has such appeal. Listen to what some of the 90,000 visitors to LittleFreeLibrary.org and scores of bloggers have said:

“A concept this magical hasn’t captured my attention in such obsessive proportions since the discovery of fairy steampunk tea parties, unicorns, and snickerdoodles dipped in white chocolate. Okay, seriously… What more magical way to spend the autumn season, with its cozy crackly fires and damp leaves and afternoon tea with the neighbors, than by putting up a cute little neighborhood library to share BOOKS with said neighbors?”

“So pretty! Much nicer than the “library” at our apartment complex. Although I’m a huge fan of the idea, the only books on the shelf are bodice-rippers and The Book of Mormon. Don’t get me wrong, I’m all for a hunky male and pathetic female in an unrealistic romantic drama, but that’s not the ONLY thing I want to read! I was totally captivated by the Little Free Libraries! What a cool concept – thanks for sharing.”

An outright sponsor or neighborhood philanthropist buying the wooden box, however, is probably not enough to ensure its “success.” As any organizer knows, people support that which they help create; something they belong to or something that “belongs” to them. In a discussion of the commons, the quotation marks are there for a reason. The neighborhood that hosts a potluck or house party to raise funds for a Little Library is likely to protect its emotional and fiduciary investments. That’s part of the reason the Libraries are described as gifts to the community rather than retail off-the-shelf products.

Uniqueness counts. Photographs and names and thank-you signs abound on the limited Little Library wall space. Handwritten notes in the books and on bookmarks are strongly encouraged. Kids and adults alike want to know where their books are traveling, so Little Free Library suggests registering some titles with Bookcrossing.com. That way, bibliophiles can track the routes of their favorite books from hand to hand, sometimes around the world.

A Little Library is a connecting point. Accompanied by a bench or a garden, it attracts the curious as well as regular patrons; pushers of baby carriages and dog walkers as well as bicycle riders and runners; commuters in addition to casual evening strollers. When kids’ answer to the question “Where are you going?” is, “oh, we’re going to the Library,” the symbolic meaning takes shape. A Library to them means a Little Library they can reach…and give to…and treasure, right there in their own neighborhood.

Parker Palmer, author of Healing the Heart of Democracy has often commented about our need for local gathering places where people who may not have known each other before could meet and chat about common interests. “I wish I’d known about the ‘Little Free Library’ movement when I was writing the book!” he recently wrote on his blog. “ These libraries— which are a cross between a bookshelf and a birdhouse—are popping up all around my neighborhood; I saw 3 of them on 2-mile walk yesterday. Even if no one is there when you’re borrowing or contributing books, they say, ‘In this neighborhood, we share and we care.‘”

A half dozen copies of The Abundant Community, by John McKnight and Peter Block, and On The Commons' All That WeShare: A Field Guide to the Commons are already circulating through Little Libraries in Madison, Wisconsin, sponsored by the Capital Times Kids Fund. A collection of family health books written at a 4th grade level will be offered through hospitals and health literacy groups. The Wisconsin State Historical Society, along with authors and publishers, are contributing books and ideas for specially designed Little Libraries. While advertising is not solicited, underwriting and contributions are. Do it yourself builders are already contributing an average of $50 each time they finish a new construction. Other sponsors are welcomed.

Parks and transit systems. Health care facilities. Schools and community centers. Third places like coffee shops and bars. Child care centers. Community gardens. All of them are good locations for a Little Free Library. Gandhi’s ashram in India wants one, and so do blog readers in Finland, Australia, Germany, Sri Lanka, Nepal, the U.K. and New Zealand. But who will make them, fill them with good reading and protect them? Who will “pay” for them? A Little Free Library Pay It Forward Fund  has already arisen and a phantom donor has begun dropping off some of the fund’s first gift Libraries.

The balance between quality, the spirit of sharing and diverse interests will undoubtedly be challenging as this movement grows. If someone haggles over the cost or wants a discount, they miss the point. But if they want to figure it out so they can give something to their neighbors, they get it.