Learning to Trust Each Other, Online and Off - Shareable
Skip to content 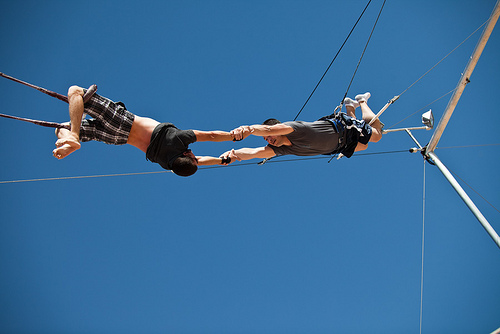 The results of The New Sharing Economy study, released last week by Latitude Research and Shareable magazine, point to a possible solution to one of America’s most troubling trends: the decline in social trust.

This trend is documented in a variety of national surveys. The General Social Survey, a periodic assessment of Americans’ moods and values, shows a 10-point decline from 1976 to 2008 in the number of Americans who believe other people can generally be trusted. The General Social Survey also shows trust in all US institutions declining (with the exception of the military, which, after a post-Vietnam stumble, saw a 10-point jump in confidence from 2000 to 2008).

Why are these declines bad for all of us? Largely because trust is very highly correlated with quality of life. Numerous studies show that where social trust is high, crime is low. Trust is also very good for democracy—why bother to vote if you don’t trust politicians or the results? Not to mention the economy: Studies by Stephen Knack, Philip Keefer, Armin Falk, and Michael Kosfeld, among others, have found strong links between trust and economic performance.

Why has trust been declining? In his 2000 book Bowling Alone, Robert Putnam drew on a vast data set to argue that people were simply participating less and less in the community activities and civic organization that create the kind of reciprocal relationships that allow social trust to flourish—largely because television was consuming leisure time. When the Harvard University GoodWork Project ran a series of surveys in 2004, researchers “found that individuals typically blame the media for loss of trust.” Right or wrong, the effect appeared to be generational. “Most of the young people we interviewed have a default stance of distrust towards the media,” says Carrie James, research director of GoodWork.

Of course, the media landscape of 2004 was totally different from the one we have in 2010. The intervening period has seen the emergence and phenomenal growth of new mobile technologies and social media like Twitter, Faceboook, and countless other services. It’s much too early to declare that social media will save our communities, democracy, and economy by rebuilding trust—some believe that it’s doing the opposite—but our New Sharing Economy Study does suggest that social media provide new opportunities for people to re-learn to trust each other.

For starters, 78 percent of the study participants felt that interacting with people online made them more open to the idea of sharing offline resources, even with strangers. This is very consistent with a huge amount of research: Laboratory experiments show that when individuals successfully engage in an exchange that involves trust, it creates more trust and positive emotions. People are more likely to engage in additional exchanges that require trust.

Many of the 537 participants in the New Sharing Economy survey expressed similar ideas. As a 44-year-old woman in Helsinki, Finland, put it: “[If I designed a sharing service], it would work on network based on recommendations: I know you and you know someone, so you build trust—sort of ‘get introduced.’ Based on trust and community relationships, it’s easier to broaden one’s perspective towards sharing almost anything.”

This is why reputation is becoming an important form of currency; communities that offer transparency (such as through open ratings and reviews) encourage good behavior and trust amongst members.

Some participants embraced the notion of that sharing networks might complement or replace social institutions that have declined in power and importance. “What I'd want to set up is free sharing of services and stuff amongst a community of people in the way that a small town might once have functioned,” said one 38-year-old woman in Providence, RI. “I think this kind of interaction is part of community ties and support networks that used to develop naturally and spontaneously and need some encouragement now.”

Kim Gaskins of Latitude Research argues this creates “a huge opportunity for businesses to create the technological and community infrastructure that will help people to share in new ways, locally and across much broader distances, than was ever possible before.” And the really interesting thing is that this business activity may actually build social trust. In fact, as we’ve discovered through our interviews at Shareable.net, many sharing economy entrepreneurs explicitly see building trust as essential to their business models.

“There was a day when it would have seemed like a crazy idea to send your goods to people you had never met,” CouchSurfing founder Casey Fenton told us. “But [businesses like eBay] implemented different trust systems and it worked really well. And when you say it like that, people realize we have overcome the trust barrier through the CouchSurfing system. In fact, we are in the businesses of helping people understand just how trustworthy someone they have never met is. It is not our mission, but it is core to why we exist.”

Will launching new product service systems—whether for-profits like Zipcar or non-profits like Kiva—help us to cut crime, improve democracy, and increase prosperity? Will building a new business model help build a new kind of society? No one knows for sure, but the participants in the New Sharing Economy Study say it’s worth a try.

This piece was partially adapted (and updated) from a 2008 essay I wrote with Ohio State University sociologist Pamela Paxton—worth a read if you’re interested in the issues and research surrounding social trust. Some of the language from this piece was also borrowed directly from The New Sharing Economy study, which will be presented and discussed at the next SXSW.

This is one of four posts on our study: