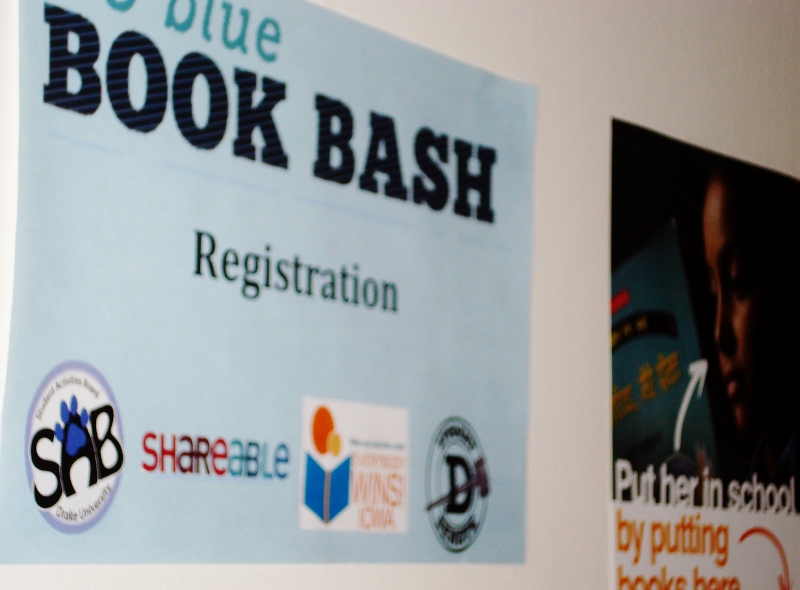 Drake University students won a Shareable seed grant program this past February to host a book swap as a service project to improve youth literacy. Students in Iowa are passionate about literacy as a crucial path to being able to live a meaningful and financially stable life. Fifty-six percent of US prisoners have very low rates of literacy which is in turn linked to very high rates of unemployment, speaking to the need to foster a love of reading at an early age.

Joining together on April 23rd, eighty-five children from the Des Moines community and sixty-eight volunteers from Drake University celebrated the first DU Blue Book Bash. Local Des Moines Public School students swapped their old books for a new book while engaging in fun activities like making bookmarks, munching on healthy snacks, writing a letter to an athlete, designing street painting squares, and doing read-out-louds. Activities centered around the 104th annual Drake Relays, which bring in hundreds of world class athletes and thousands of fans this year as the host for the Olympic trials.

Planning was put into action after Drake student organizations, the Student Activities Board and Student Senate approached Drake’s Service-Learning office about putting on an event to help bridge the gap between Drake students and their local community during the Relays. The idea of a book swap was birthed from a partnership with the organization Everybody Wins! Iowa. Everybody Wins! is a non-profit that promotes a love of reading through a mentorship program for Des Moines public school students, who are on free and reduced lunch and often can't afford books.

The DU Blue Book Bash was an awesome event and went much better than expected for the first time holding such an event on Drake’s campus. One volunteer, Jared Simmer stated, “I feel the DU Blue Book Bash really opened my eyes to the needs of the community. I now plan on becoming more involved in the Des Moines community through different volunteer opportunities to help these kids that are in need of finding an outlet to grow.” Jared Simmer brought in a book to donate along with many other of the event's participants.

The nearly 300 books that were donated were collected as a fundraiser through the organization Better World Books. The Book Bash had such an impressive impact on the community, students are already on board for the 2nd Annual Blue Book Dash. Student volunteer Moller Wheeler said, "It was a fabulous success and such an awesome experience for the students here to be able to participate in a service project during relays week, without even having to leave campus! More importantly, the children that came to the event experienced a little piece of the relays, developed more of a connection with Drake and took home a free book!"

Kelcy Smith is a Junior at Drake University in Iowa, double majoring in Biology and Psychology with a concentration in behavioral analysis of developmental disabilities. She wants to become a

Kelcy Smith is a Junior at Drake University in Iowa, double majoring in Biology and Psychology with a concentration in behavioral analysis of developmental disabilities. She wants to become a genetic counselor. She enjoys arts and crafts, painting, playing volleyball, being outdoors and hanging out with friends.