Is Social Entrepreneurship the Rich Saving the Poor? - Shareable
Skip to content 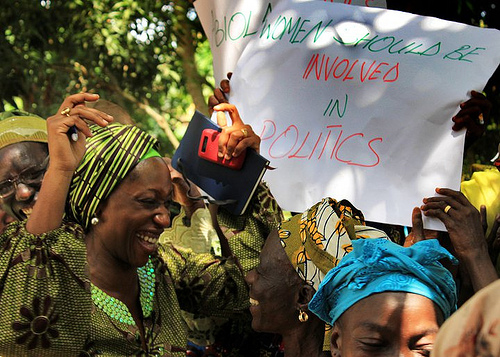 For the past 15 years, I have invested a great deal of time, energy and money in the field of social entrepreneurship. I did this because I believe we need to take very significant actions to address global poverty and socio-political inequality, primarily through the creation of livelihoods and personal wealth. This will only happen by financially and politically empowering the disenfranchised so that they may climb out of poverty.

Social entrepreneurship, if done properly, creates, fosters, and grows communities with new opportunities which were never within their reach before.

Over the years, as the enthusiasm for social entrepreneurship has grown, I have seen all sorts of individuals, teams, and organizations join our ranks to start to form an ecosystem. But I've also observed the term “social enterprise” used in all sorts of ways – some valid, and some completely disingenuous.

Many of these things are well-intentioned and some even make a positive difference in the lives of people and their communities. These activities include corporate social responsibility, ethical and sustainable business, “conscious capitalism,” social innovation – all of these things signal the creation of a new economy; but these models are not actually social entrepreneurship. Engaging with your stakeholders does not, alone, make you a social entrepreneur.

Social entrepreneurship is not about "giving back,” be that in donating 1-100% of your profits to a good cause or slick “buy one, give one” marketing schemes. (And especially not ones with such opaque supply chains as TOMS shoes, where it is unclear who is making the shoes, under what working conditions and how much they are getting paid.)

Social enterprise empowers people so that they can amplify the great work they are doing already. It is not something done to people or for people. It should be a collaborative effort done with and chiefly by those people.

The economy is a human construct. It’s a formalized system for how and why we relate to each other and how and why we create value for our society. Any social enterprise venture must have members of the disenfranchised in positions of power inside the venture, be that as a founder, executive or board member.

Members of privileged groups can be part of the solution by sharing power with underserved communities as they contribute their skills, knowledge and labor to solve their own problems and create value for society. This should be a partnership. Privileged groups should not be saviors or benevolent agents – rather they should be collaborators in creating a healthy economy that benefits everyone.

For the past three months, I've had quite a few conversations here in Philadelphia, which is chock full of social problems. I’ve had conversations about how to define social enterprise, what its goal is, and what exactly would change looks like, in the context of a citywide economic development strategy.

After much wheel-spinning, here is what I see as the central tenet of social enterprise: transformational change that, if done properly, creates new, previously out-of-reach opportunities for communities from the ground up.

"The ultimate measure of a man [or woman] is not where he stands in moments of comfort and convenience, but where he stands at times of challenge and controversy. The true neighbor will risk his position, his prestige, and even his life for the welfare of others. In dangerous valleys and hazardous pathways, he will lift some bruised and beaten brother [or sister] to a higher and more noble life." – Dr. Martin Luther King, Strength to Love. 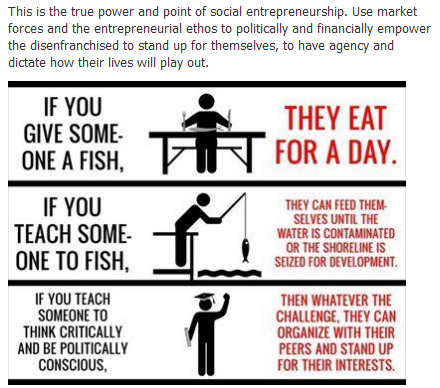 This philosophy and practice is very much what my role model and hero Muhammad Yunus did in founding and developing Grameen Bank for 30 years.

During those 30 years, he was held accountable to the owners and board members, who were most importantly the bank’s customers: the disenfranchised women he set out to help. He laid the groundwork for this practice well before microfinance became sexy. He did this as a highly esteemed economics professor, with a comfortable life and high social standing in his community. Because of his position and the lack of belief in his vision, his ideas spawned vast criticism. The naysayers weren’t just the loan sharks, but also the do-gooders and the general population, as well as his friends, family, and colleagues.

The push back was due to the fact that his work was revolutionary. Grameen did not merely “make an impact,” but created a transformational force that empowered a generation of women beggars to become entrepreneurs with control over their destinies. The effects of his work have cascaded into the next generation, who are better off than their predecessors.

“…There has also been a shift from agricultural wage labour (considered to be socially inferior) to self-employment in petty trading. Such a shift in occupational patterns has an indirect positive effect on the employment and wages of other agricultural waged labourers.” – Breaking the vicious cycle of poverty through microcredit, from Grameen Bank's website

There are many great ventures already underway moving the field forward:

Most directly related to Grameen Bank is Inventure, a global organization combining information and technology to unlock financial access for all by providing financial literacy, accounting, and credit scoring through a text-messaging platform.

Sughar – Balochistan, Pakistan (in the local language, it means skilled and confident woman). This organization is creating participatory solutions to community problems. The initiative is aimed at ending the negative customs by promoting and magnifying the beautiful traditions and providing socio-economic empowerment to women.

CREA – in Mexico City and Zacatecas. CREA supports women entrepreneurs to believe in themselves and their work, to manage successful business, and in this way to improve their own income and standard of living. CREA promotes the comprehensive personal development of women as decision makers and successful businesswomen that are leaders in their homes and communities.

Jacobs Center for Neighborhood Innovation, of San Diego, CA. “Resident Ownership of Neighborhood Change” is a program created to foster the creation of businesses, jobs, and community wealth. The Jacobs Center is also meant to expand the avenues and opportunities for resident participation in the planning, decision-making, implementation, and ownership of community change.

That is transformational power that social entrepreneurship was created to foster!

If you would like to become a social entrepreneur (or already have a venture underway), there is a great community around the world that can help you get started or move your idea forward. Here is a helpful tool kit full of resources and a map of accelerators and incubators that can help you launch and grow your social enterprise.

I'm a StartingBloc fellow who consults with entrepreneurs, guides round table discussions and strategy sessions. I'm a connector to experts in the sector to aid in the development and execution

I'm a StartingBloc fellow who consults with entrepreneurs, guides round table discussions and strategy sessions. I'm a connector to experts in the sector to aid in the development and execution of social enterprise ventures. I work to create cross sector collaboration which helps communities foster holistic economic development via a multi-disciplinary approach to problem solving and innovation. Having spent the past 5 years traveling all over the country working with social entrepreneurs and the organizations that support them to help build a national infrastructure for the sector. I'm now putting to to use as a scout for SOCAP. The largest conference for impact investing. I'm also a cyclist, knowledge junkie, film and slam poetry aficionado as well as a lover fine food & craft beer.