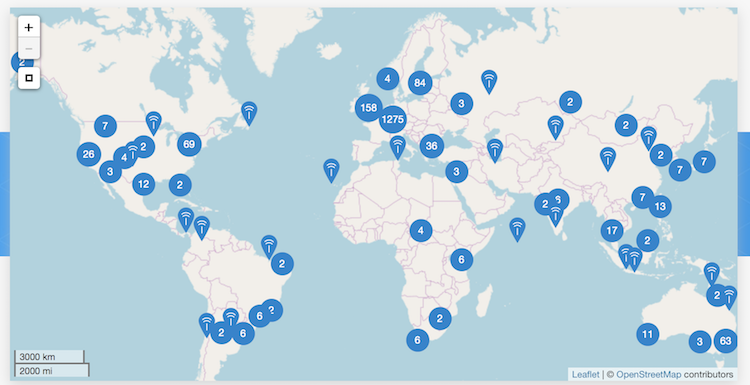 At a meeting in a hackerspace in Amsterdam, business partners and friends Wienke Giezeman and Johan Stokking encountered the Long Range Wide Area Network, or LoRaWAN technology, for the first time. This technology makes it possible to connect 10,000 devices within a radius of approximately six miles of each other as an "Internet of Things" network, in which sensors with low battery usage are able to operate.

"We saw how this technology offered the potential to build a decentralized Internet of Things data network," Giezeman said. "At the end of the presentation, we invited the attendees to come over for a brainstorm on how to realize this, scheduled in our office the next morning." In a day's time the idea to build an Internet of Things for Amsterdam was born. Stokking booted up his computer to write the software code and Wienke contacted 10 companies, ranging from startups like Peerby to corporations like KPMG and Deloitte, as well as the Port of Amsterdam, to ask them if they would be willing to buy a router and place it on the roof of their office buildings.

Six weeks after their brainstorming session, they launched "The Things Network," an open Internet of Things (IoT) network in Amsterdam. Soon after the launch, Giezeman and Stokking received hundreds of letters about IoT from people all over the world with just one question: "How can we do this ourselves?"

"We realized that in order to answer this question 'how' to realize this, we could learn a lot from the way the internet was initially build," Giezeman said. "Having the users invest in the infrastructure themselves and subsequently having the infrastructure cooperating with open protocols."

They realized that by creating this infrastructure, the eyes of the world were drawn towards them. This offered a great opportunity, with the obvious pitfall of distracting them by a torrent of attention. "As a first step, we built our own community platform and made documentation to keep it simple for everyone to replicate our success," Giezeman said. The formula worked, and the number of active communities grew rapidly. Soon the first use cases surfaced. "By opening up our network, we went from a 'technology push' to an 'idea push.' The solutions from the community serve as inspiration for other developers," he said.

In this storm of attention, facilitation is the magic word. "We didn't grow to 500 communities in 90 countries, because we supplied everyone with our support," Giezeman said. "We offered them content and a platform to get started. We even noticed that the more we support personally, the less sustainable our community becomes." Members of the platform answered questions from the community, which helped direct an international group with minimal resources. Now, the Things Network is covered by a foundation with a separate private limited liability company in which about 15 people work on IoT assignments from over the world.

The Things Network being open source from the first day hasn't been an idealistic choice. "We were looking for a model which us fit to scale rapidly," Giezeman said. "The uniqueness of the model isn’t found in the software, but rather in the critical mass. It’s the only way to make a movement like this great."

As commercial parties entered the platform, Giezeman and Stokking felt it was time to consider the durability of the model. "When I’m using the network for a solution, we're making a commitment, also known as peering," Giezeman said. "At the moment you're requesting much data from me, but I'm requesting less of you, you pay me. This is distributed in such a way, that capturing it in a system would create so much overhead that the system would be rendered dysfunctional."

This is where blockchain comes in the picture. Blockchain is able to do one thing: Validating transactions between validated parties. "The transaction will happen with owned tokens. This is the foundation of a blockchain economy we're about to create," Giezeman said.

A virtual coin, built on the blockchain, seems to be the key to a durable model for users of The Things Network. Besides a virtual coin to pay for transactions, Giezeman and and Stokking have other plans — they are seeking to use the virtual coin to move the network forward into the next phase.

They're currently researching the possibility of an Initial Coin Offering (ICO). "Although many ICO valuations are being a wild guess, we've got a real market with 500 communities in 90 countries and 1,400 gateways," Giezeman said. "Our plan is to issue a token in which you can invest. This will enable us to finance our open source development."

For the money, raised by the issue, endless possibilities exist, like rewarding market makers who cover a city first or sponsoring sensors contributing to a certain non-commercial need of the market. Also the linking of gateways to satellites, in order to execute the mission worldwide on an even broader scale, would be possible. By implementing this through blockchain technology, it will be a decentralized effort in which all members profit from the value the network creates. How they'll exactly do so is being developed right now — again a great example of growing by sharing.

This blog was primarily published in Dutch at the website of Trivento, a Dutch IT company.

Header image is screenshot from The Things Network

Martijn Arets is an international platform expert, entrepreneur, and part-time researcher at Utrecht University. The last six years he explored the platform economy by doing over 400 interviews in 13 countries, addressing

Martijn Arets is an international platform expert, entrepreneur, and part-time researcher at Utrecht University. The last six years he explored the platform economy by doing over 400 interviews in 13 countries, addressing the drawbacks which need to be resolved in order to reach the platform economy's full potential and establish a sustainable model. At the Utrecht University, he is doing research on chances and obstacles of platform cooperatives and on platform society: new chances for inclusiveness through platforms. Martijn shares his insights, analyses, and thoughts through articles, videos, and books, as well as through presentations at (international) congresses.