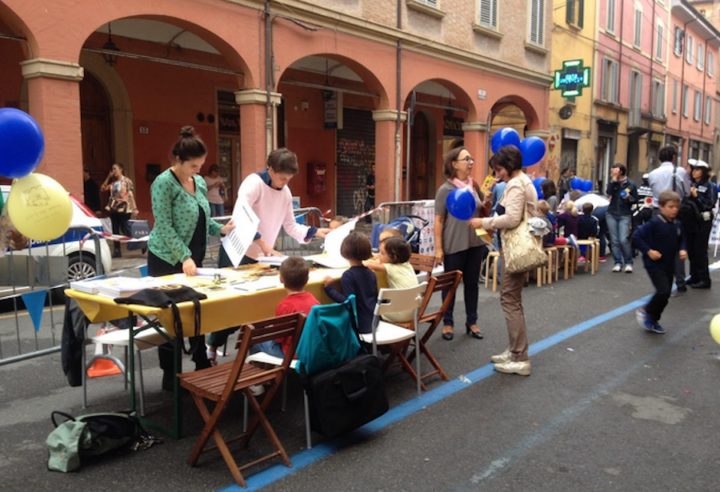 There are countless ways vibrant neighbourhoods and strong communities help people live better lives. In the age of “connected loneliness,” having neighbours to borrow that proverbial cup of sugar from is not only a way to share resources more effectively, but a great way to see the neighbourhood itself transformed into a powerful resource in its own right.

Guided by this vision, Italy’s Social Streets was launched to increase opportunities for meaningful neighbour interaction through self-organizing groups. Its goal is to help residents of a particular street get to know one another—establish enduring bonds, exchange hyper-local knowledge, and share needs, all by preparing a collective meal or carrying out projects of common interest.

It has been almost two years since Social Street Italy was born from the idea that people should be more connected in the places they call home. Since then, more than 350 groups in Italy and around the world have sprouted up with the intent of bringing people together, enabling them to organize street events, lunches, concerts, and a whole range of other local activities and initiatives.

But that was not necessarily founder Federico Bastiani’s initial goal. A freelance journalist and dad of one, Federico was tired of seeing his son playing on his own, and thus started a Facebook group for residents of Via Fondazza — his home street in Bologna — as an experiment to see if his interactions with other residents could go beyond the fleeting “buongiorno” they were all so used to exchanging. Shortly thereafter, Federico’s Facebook group shot up to 800 members and counting, in the process inspiring many others around the world to follow his lead.

And it’s not just residents who are paying attention. Social Street’s basic premise is a simple one, but one that has resonated widely across the country, where the organization has been featured repeatedly in some the Italy’s most followed national news outlets, radio shows, online dailies and even TEDx events. Abroad, the organization has even garnered the attention of academics including London School of Economics’ Anthony Giddens and transition pioneers such as Rob Hopkins.

Are you intrigued by the idea of getting to know your neighbours and seeing where that could take you?

Follow these steps to learn how to set up your very own Social Street in your city or community:

Social Street recommends a closed group to protect the privacy of your members and potentially encourage higher sign-up rates. This can be done using the group settings when you create your Facebook group, but remember: people before pixels! The use of an online network should encourage offline interaction, not just end at the digital level.

To be found among the other Facebook groups that are a part of Social Street, be sure to use the proper name convention for your group: “Residents of [street name (or square, neighborhood, etc.)] – city – social street.” (e.g. “Residents of Queen Street West, Toronto – Social Street”)

Form a small board that can help feed content, manage comments, and lead the conversation into actionable plans and events.

Print out copies of a poster that includes the details of your Facebook group, encouraging people to join. Post copies in a variety of highly visible settings like parks, apartment buildings, restaurants, schools, and laundromats.

There shouldn’t be just one person in charge. Everyone should have the ability to participate and engage in the online group’s activities, but there should be a smaller group that helps grow the conversation and organize some small actions around the comments and conversations that are happening.

4. Step into the street

Once you have engaged a small group of interested neighbours, you are ready for your Social Street. Guide people based on their interests to plan and organize a public event involving all group members as a first ‘get to know you.’ Make the event open for other people to join in as well. Keep the conversations going and use the group as a forum to plan the next meetings and activities.

The success of these groups is totally subjective. But if you’ve brought together a group of people who didn’t know each other before, and connected people through common interests, you can consider your Social Street a success!

Here are a few tried and true tips from Social Street Italy on ensuring your group’s success:

Possibilities are virtually endless, so why not give it a try?

by Chiara Camponeschi and Hillete Warner