How to Start a Critical Mass Ride - Shareable
Skip to content 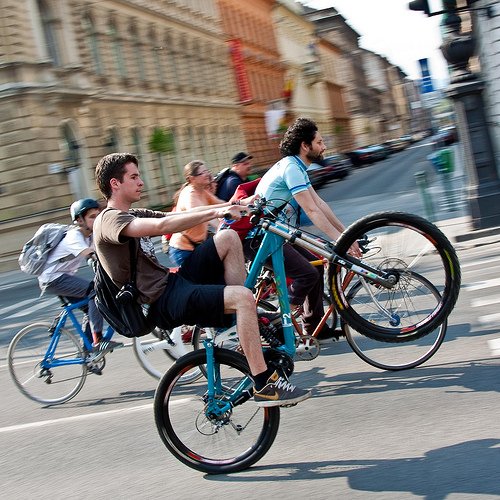 I have extremely fond memories of riding in Critical Mass, when on the last Friday of every month hundreds of bicyclists take over the San Francisco streets. It's exhilarating to participate, but it also has a huge impact on motorists and pedestrians. I recall once seeing a group of teenagers, who turned out to be tourists from Nebraska, talking excitedly about the river of bikes streaming past them. I slowed to a stop and explained to them what was happening, and I could see little lights go on in their eyes. They were catching a glimpse of another way to live, and I could tell they were going to take that vision home with them. So how can kids like them organize their own Critical Mass bike rides? While there is no national organization for Critical Mass — or CM for short — I found this very handy guide (slightly edited for Shareable.net) to starting your own:

1. Understand the structure of Critical Mass.

CM has no leaders. It's an event, not an organization. There is no national group that licenses local rides. In every city that has a CM, one or more cyclists just picked a day and time and started handing out fliers. If your city doesn't have a CM, that's what you'll do. You don't need anyone to authorize your ride. You just do it. 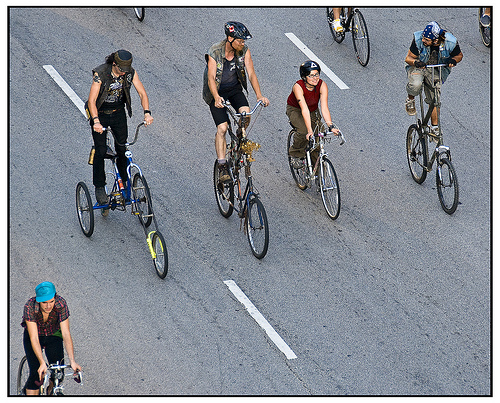 2. Put it into perspective.

Critical Mass can be fun, but in and of itself, Critical Mass doesn't change anything. CM is effective only when combined with real advocacy — such as lobbying local and state governments for bike lanes and progressive legislation. If all you and your cohorts do is ride your bikes around once a month, don't be surprised when nothing changes.

3. Decide on a recurring time, day, and starting location.

Your CM needs to happen at a consistent time and place each month so that people always know where and when it is. The last Friday of the month is traditional, but many groups have chosen other recurring days. 5:30pm is a good time for CM, because it gives people who work until 5:00 a chance to get there, while leaving enough daylight in most months for a decent ride. (Don't try to have two times, one for months with daylight savings time and one for months without. Here in Austin we used to have the split two-time format, but even after we tried to standardize on 5:00 year-round, years later people are still confused as to whether it's 4:30, 5:00, or 5:30.) A landmark on a university campus is a typical starting point, but consider using another public place to indicate that CM isn't just for college kids. 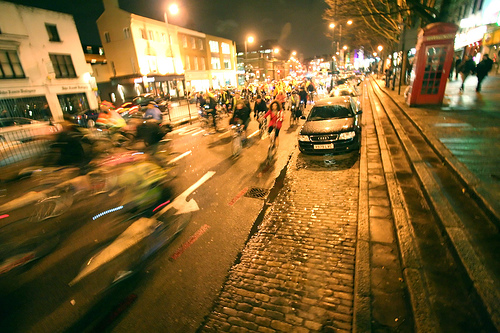 When local police learn of your ride, they may insist that you get a permit, perhaps a parade permit. Don't do it. The point of Critical Mass is that biking is a right, not a privilege. Cars don't need permits to ride on the streets, and neither should cyclists. They may threaten to arrest you if you ride without a permit. At that point you'll need to consider whether you're willing to get arrested to make your point. If you're not, and you choose not to ride or choose to get the permit, then you've allowed them to put cyclists in their place. It's not an easy choice for some. (Austin CM was told it needed a permit, refused to get one, and then suffered arrests of riders. CM'ers went to court and either won their cases, or had them thrown out of court. Riders in other cities, such as NYC, suffered similar harassment but ultimate victory.) (Here's more on why you shouldn't get a permit.) 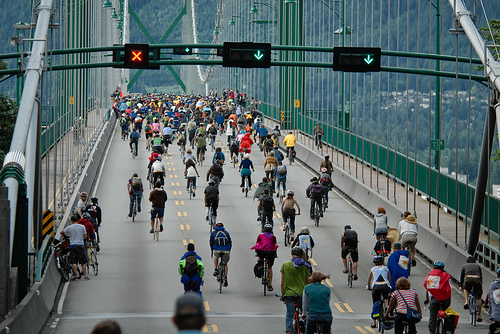 Most CM rides don't have a set route — they go through the central city randomly, with whoever happens to be in front leading the way. Of course, you can set a route if you want to, but don't think that you have to.

If your ride draws any appreciable number of riders, you can expect attention from the police. Riders may or may not choose to follow the law, but you still need to know what the law is so you know whether or not you're breaking it. Get a copy of your local traffic laws from your state and city websites. Most states requires cyclists to obey all the same rules as cars (e.g., Stop signs & red lights). You'll probably also be required to have a headlight after dark, and there may be limits to how many bikes abreast (side by side) you can ride. Some riders ignore laws that have no safety consequences (e.g., riding 3-abreast instead of 2-abreast). 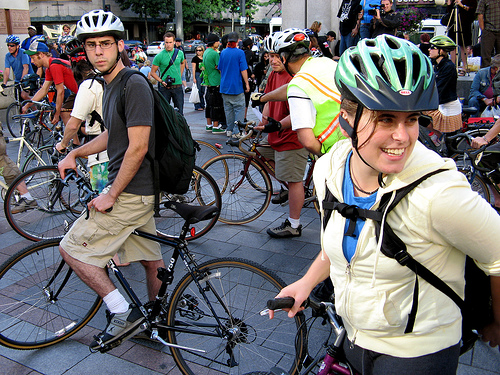 7. Will you block traffic?

The most controversial aspect of CM is the extent to which it blocks traffic. CM'ers are fond of saying "We're not blocking traffic, we ARE traffic!" While that's a cute phrase, it's obviously pretty silly. It's like a murderer saying, "I didn't kill that human, I am a human!" Just because bikes are legitimate road users doesn't mean they don't slow down other road users — especially when they go out of their way to do so by taking up multiple lanes.

Remember that CM is supposed to be a celebration of cycling, not your opportunity to see how much inconvenience you can cause to others. It's about asserting our right to the road, not denying others their right to the road.

Leave at least one lane open for cars. (So if you're on a 4-lane road, take no more than 3 lanes. Except if you're on a one-lane road, obviously you will take the whole lane.) Taking all the lanes, all the time, might be fun for you, but it certainly brings the police down on you quicker. Motorists will ring 911 off the wall with their cell phones if you block them 100%. It also doesn't win you any friends. Are you doing CM to show motorists how much fun biking can be, or are you just trying to piss them off because it makes you feel good? Only CM riders can answer these questions for themselves. Also remember that your local laws may have a say about that (though some riders choose to ignore them).

Even if you decide that you don't want to go overboard with taking lanes, understand that you can't control the riders — some riders may want to take all the lanes all the time. If this is not the flavor you want for your ride, then make that clear in the fliers you make for the ride, and get other cyclists to apply gentle peer pressure when a few cyclists stray. Unfortunately if two people out of 200 decide to be jerks then your CM's reputation will come from them rather than from the other 198. But since CM has no leaders, you can't order anyone to ride the way you want, you can only try to encourage them. 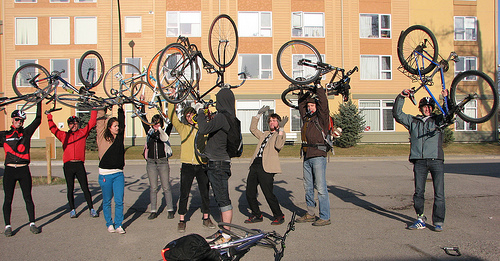 Harassing motorists doesn't help anyone. You can assert your right to the road without being a dick about it. Many CM'ers make it a point to be friendly to motorists, such as smiling and waving — even smiling and waving back when motorists are honking and cursing at them. Some go even farther, handing out flowers, holding signs saying "Sorry for the delay", or passing out fliers apologizing for the minimal once-a-month delay, and explaining why we ride. If you want to avoid confrontation with motorists, put something to that effect in the fliers you use to promote the rides.

9. Make fliers and promote the ride.

The best advertising is fliers placed directly on bicycles — you know a cyclist is going to see it. Make several strips per page to save paper. Here's an example. (You can attach the fliers to the bike in many ways — such as squeezing the brake lever to open it, slipping in the flier, then releasing the brake lever. Or you can thread the flier between the brake & gearing cables on the top tube.)

Also put up fliers at local bike shops. If your city has local bike media (like newsletters), don't forget to inform them as well. Set up a simple website, and let me know about your ride so I can add it to the Hub. 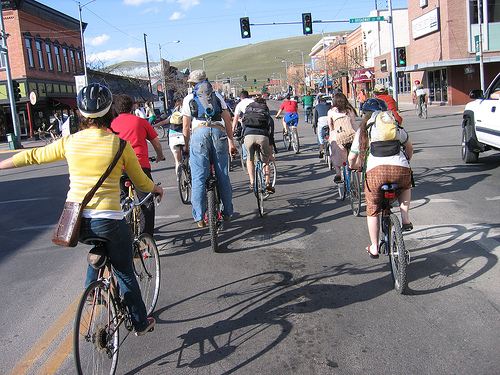 10. Be prepared for police intervention.

The police may or may not show up at your ride. (But if you consistently take every single traffic lane or harass motorists, then they almost certainly will.) If they show up, they may harass you for breaking traffic laws, or they may harass you even if you're not breaking any laws. Your best defense against unreasonable police action is a video camera. (Though in some cases, police have improperly confiscated cameras and tapes.) One Austin CM'er mounted a camera to her helmet. Check out this advice about what to do if you're stopped or arrested.

CM can be festive. Many riders wear costumes or decorate their bikes extravagantly. Use your imagination. It make the rides more fun. 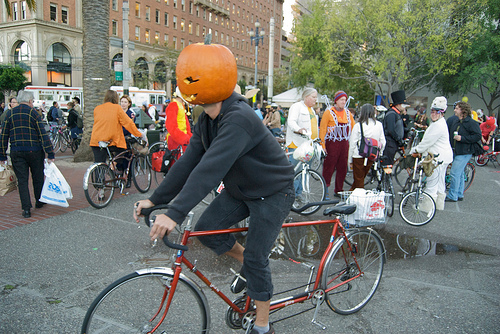 Is Critical Mass just for grown-ups? Heck, no. If you're a parent, you can organize a "Kidical Mass"!