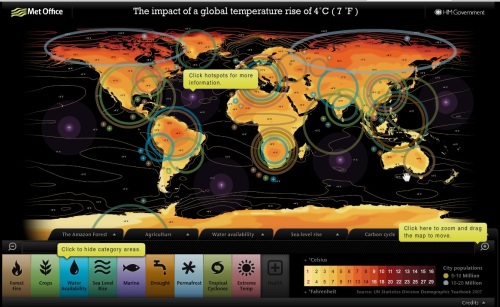 It’s almost the end of 2012 and a leadership vacuum continues to plague the nations of the world on our single biggest global threat. Our climate is changing. And while the increase in extreme weather we have experienced in New York City and around the world may or may not be the result of it, the risk that it might be — given this week’s devastation — should compel all elected leaders to take immediate action.

The urgency of this problem is clear when we think about the wave of wildfires, floods, and droughts that spread across the world this year and “freak” storms like Hurricane Sandy that wreaked havoc on New England earlier this month. Even the skeptics among us are increasingly nervous about offshore oil rigs going up on flames and pouring millions of barrels of precious crude into the open waters of the world’s oceans.

Despite all the media coverage from major events like these, we still had to sit through a presidential election cycle here in the US where climate was “off the table” and put on the back burner behind job growth and taxation. What will the climate activists of the world need to do in order to get beyond the tipping point on climate action? How can the efforts of such groups as 350.0rg, Transition Towns, the Climate Reality Project, and countless others unite in their strategic engagements to transform the discourse around global warming before it’s too late?

An essential component that has been absent is the use of rigorous cultural analysis tools that reveal underlying patterns of thought, behavior, and social connectivity across this vast issue space. In other words, we need to apply Meme Science to the climate movement.

You may already be familiar with the “meme” concept — first introduced by Richard Dawkins to describe cultural units of evolution that operate in a manner similar to genes in biological reproduction. Standard examples like “tying shoes” or “group hunts” stand out as practices learned by early innovators and passed down through the generations as stable patterns of culture.

You are familiar by now with memes from the internet where funny pictures with captions spreading are now called internet memes — such cultural expressions as LOLCats and other viral pieces of digital media. And yet the deeper significance of this approach remains largely untapped by social change efforts. A scientific revolution has been underway in the quiet corners of academia for more than four decades — via convergent insights about the human mind from the cross-disciplinary field known as cognitive science — that makes the study of culture both empirically robust and mathematically rigorous. Basically, you can think of Meme Science as the combination of:

Imagine how useful this approach can be for the climate movement. No more blindly posting facts and figures with no understanding of the underlying beliefs, values and worldviews of people. We could finally reveal the hidden motivations of climate skeptics and describe psychology of their denial. And we could identify the memes that are on the verge of spreading, alongside those that would inhibit them and stand in their way.

This is the kind of knowledge we are gathering in our Climate Meme Project right now. And we’re doing it in the spirit of open collaboration by hosting it on a crowdfunding site — Rocket Hub — in order to recruit people to help us with the research and dissemination of our results. A vital feature of this project is the way we will train members of the crowd to hunt for memes so that they can take the analysis and run with it. The project will also culminate in the creation of a Climate Meme Toolkit that will be freely available to everyone — paid for by the crowd and owned by the crowd under a Creative Commons license.

Hopefully this brief summary of meme science makes apparent the value it can bring to the climate movement. Now let’s get to work and push beyond that cultural tipping point so that the leaders of the world will finally have to respond to our collective call to action!

This article is authored by Joe Brewer and Lazlo Karafiath, founding partners in a new venture called DarwinSF that brings Meme Science into the social impact arena. Their first project: To reach a cultural tipping point on climate action! Get involved here.

Joe Brewer and Lazlo Karafiath are co-founders of DarwinSF, a social impact company whose mission is to help good memes spread far and wide.

Joe Brewer and Lazlo Karafiath are co-founders of DarwinSF, a social impact company whose mission is to help good memes spread far and wide.