Off the Waffle in Eugene, Oregon is not your typical waffle house. You won’t find pads of butter, bottles of fake maple syrup, or sides of hash browns and eggs here.

The owners, brothers Omer and Dave Orian, are in their mid-twenties and usually sport matching red afros. They and their seven employees serve traditional Belgian Liège waffles made from yeast-leavened batter. They use pearled sugar imported from Belgium, which caramelizes through the waffles, making them crunchy on the outside and moist on the inside. 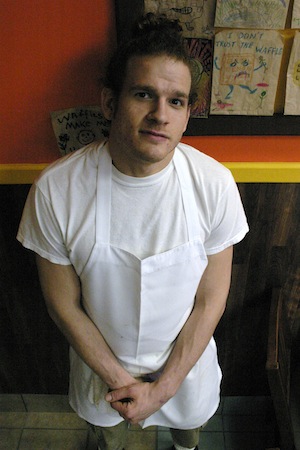 And if you’re low on cash, Omer and Dave are happy to make a trade, because they’re big fans of bartering.

“When we were in elementary school, Dave would carry with him a little suitcase full of toys in hopes of trading them for cool stuff that other kids had,” says Omer (pictured left).

Dave says the brothers have traded all kinds of things for waffles, including “acupuncture, massage, plumbing, a trumpet, and art.” And Omer adds that they received yard rakes from one customer.

“We have bartered for things we never would have gotten were we to have to pay cash for them,” Dave says.

The Orian brothers also installed a “barter wall” next to the counter to encourage exchanges between customers. The “wall” is a large corkboard with an FAQ next to it explaining: “It may benefit you to trade your goods and services with your neighbors as an alternative to using money, which can potentially be a little hard to find these days.” 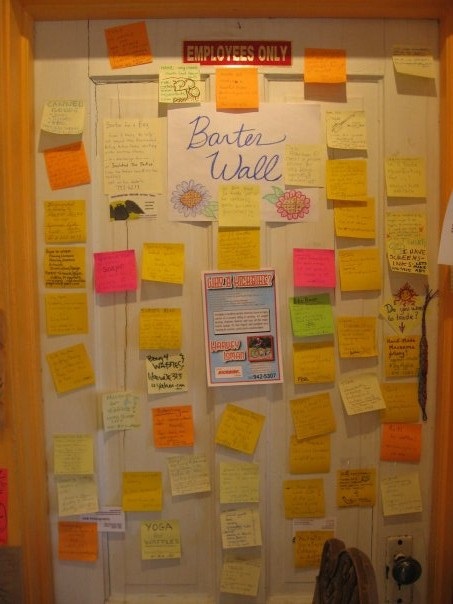 “I don’t know that our five foot bartering wall will be the thing that turns this local economy in the right direction, but I do think we can make a significant impact,” Omer says. He argues that Eugene possesses ample “human and natural resources” to sustain itself. “The lack of cash flow due to the economy should not stop this city from prospering.”

Right now you can make a number of exchanges using the wall. Ellen will do some proofreading or editing for you if she can borrow your truck for an hour. Heather, a doula-in-training, will provide free labor support in exchange for experience toward her certification. Mike will fix your bicycle for some moped parts. And if you’re a business lawyer, Omer and Dave would like to trade you some waffles for your services.

If legal work for waffles doesn’t sound like a fair trade, you probably haven’t tasted these waffles. Everyone who has seems to invariably sound like a teenager with a crush. The store is wallpapered with waffle wrappers decorated by customers, many of them waxing poetic about the waffles. “Waffles make me so happy,” one gushes. “There’s a waffle at the end of the rainbow,” another proclaims. Off the Waffle’s 1,695 Facebook fans seem pretty smitten as well. 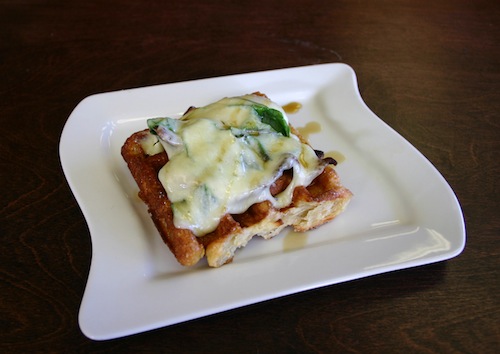 Off the Waffle’s “original” waffle is served in a to-go wrapper just like it would be if you purchased it from a street vendor in Brussels. But you can also sit down in the casual dining area, enjoy the Django Reinhart music that’s often playing on the stereo, and get a waffle served on a plate and topped with a combination of gourmet ingredients you’d expect to find in a much fancier restaurant. The Ahee-hee, for instance, features cream cheese, garlic-rubbed seared rare ahi tuna, sesame seeds, and drizzled sesame oil.

While you wait, you can pick up Off the Waffle’s small “joke basket” and exchange jokes with other customers. It’s crammed with scraps of paper, post-it notes, and pieces of napkin scribbled with jokes like, “What’s the difference between snowmen and snowwomen?” You turn it over for the punch line: “Snow balls.” 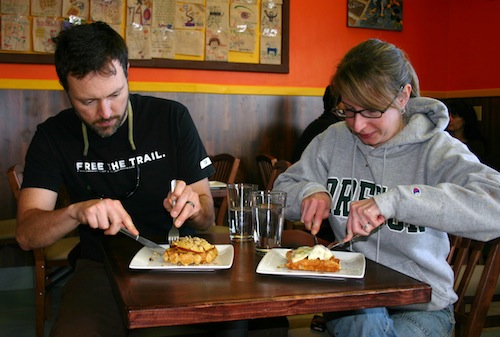 Off the Waffle just moved to a new location, and they haven’t put their sign up yet, but day and night, a line seems to snake from the counter to the door. Most people pay cash, but if you have a healthy potted plant or a restaurant-style highchair, Omer and Dave will probably trade you a mighty tasty waffle for it.