How to Increase Public Land Sharing in Austin, Texas - Shareable
Skip to content

Aubrie Christensen is a recent graduate from the University of Texas’ Community and Regional Planning masters program. The below is a summary of her thesis.

Cities are natural hubs of sharing; places where people go to share ideas, goods, services and experiences. Within this context, sharing can and should be incorporated into urban policy, programs and initiatives. As one of the scarcest resources in urban areas, land holds some of the greatest potential for sharing.

To learn about the ways in which Austin currently shares city-owned land, and to gain an understanding of the challenges to increased land sharing, I researched both Austin and San Francisco so that I can make realistic recommendations to Austin’s urban leaders. I used San Francisco as a reference point, as San Francisco has already shown leadership in the sharing economy and I believe Austin can learn from what others have done. 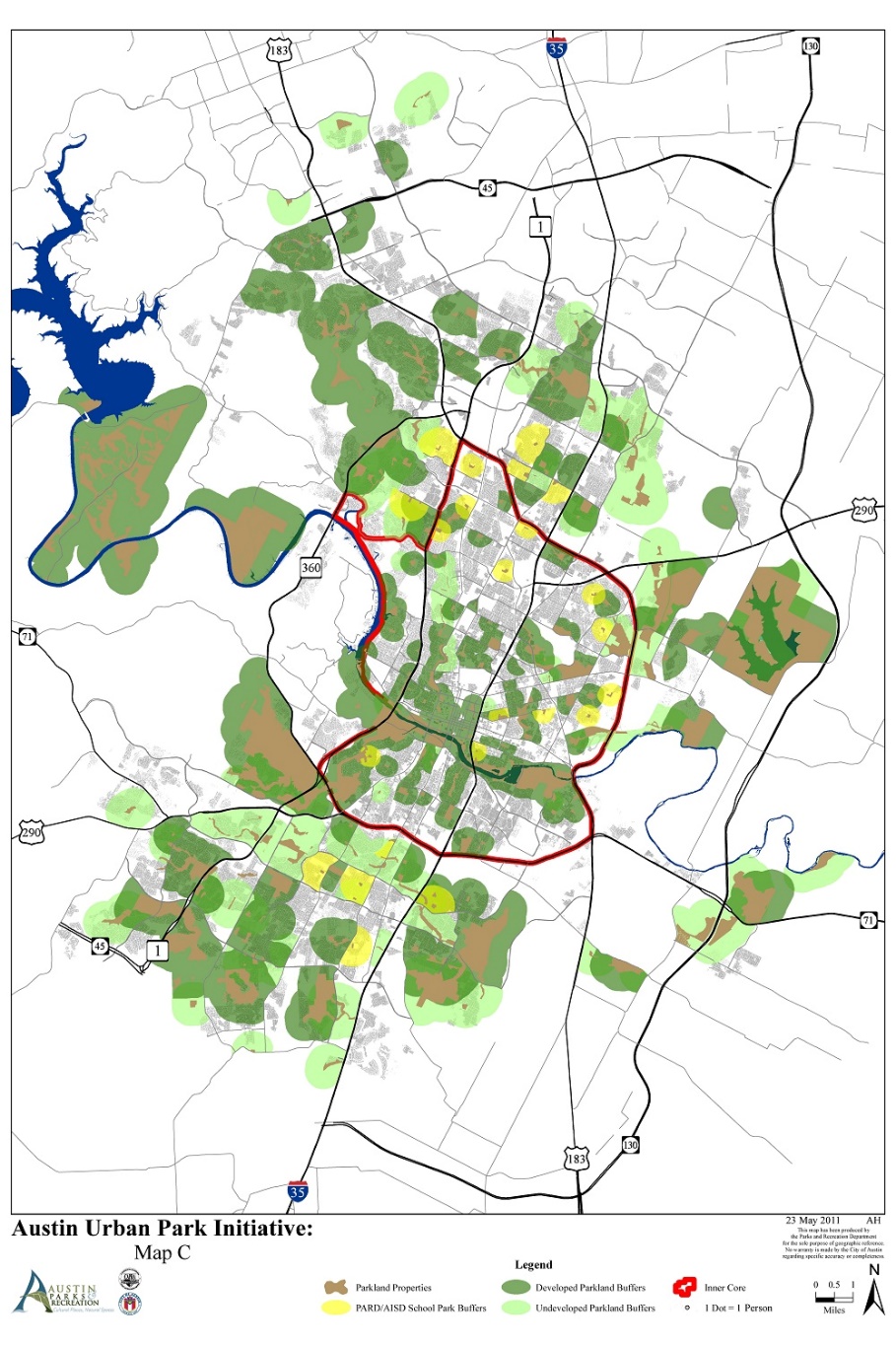 Austin currently shares land through a number of programs and pilot projects. The Parks and Recreation Department (PARD) has two different sharing-based programs: the school-parks program and the community gardens program. The school-parks program is part of a bigger initiative to increase access to parks for all City of Austin residents. According to Randy Scott of PARD, the city currently shares 23 park sites with Austin’s Independent School District (AISD). These shared parks are used by AISD during school hours, and the surrounding community can use it after school and on weekends. This type of sharing brings down maintenance and purchase costs for both parties. The agreement also increases accessibility to recreation facilities for the community, and ensures land owned and paid for by the public is available to the public. PARD currently works to expand the number of school-parks in areas where access to parks is currently limited.

The community garden program is also managed by PARD. Meredith Gray, the Conservation Program Coordinator within PARD, works with various departments within the city to provide access to city-owned land for use as community gardens. Gray also works with city residents interested in starting community gardens to find suitable parcels and get permission from the land-owning city department. She then helps gardeners work through the design and development process, providing assistance from start to finish. Gardeners are required to find a non-profit to act as a sponsor and to provide liability insurance.  The project is only three years old, but has been extremely successful, with six completed gardens, four senior gardens, and three in progress. According to Gray, there is a high demand and not enough time and resources to keep up with it right now.

Austin works to expand access to city-owned land in other ways. The city is currently in the process of developing its first Community Land Trust on public land.  Providing affordable housing in a city where land values are rapidly increasing is no small task. Kit Johnson, the City Architect, sites ever-increasing land costs as one of the biggest barriers to achieving affordable housing. By removing land cost from the equation, says Johnson, the city can share unused parcels of land, which would allow developers to deliver truly affordable housing. 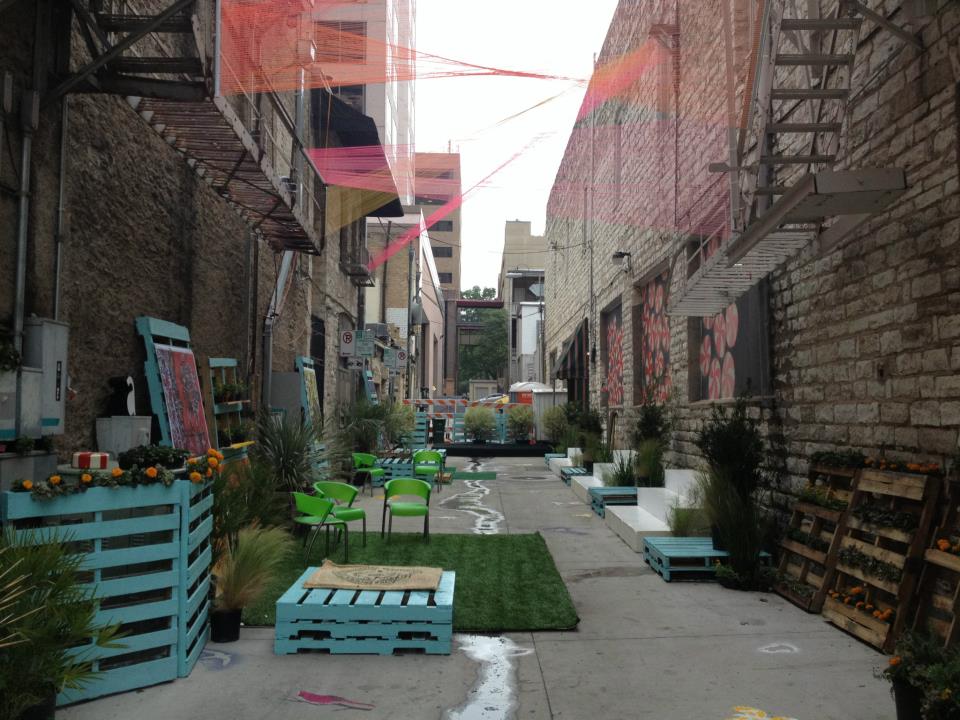 Other projects in Austin focus on expanding possibilities in public spaces. In 2013, Austin did a pilot Alley Activation project, which explored the ways an alley in downtown Austin could be activated to become a vibrant public space. Austin also has a pilot project on Congress Avenue, the main street downtown, where the city allowed a small, local grocery store to take over three on-street parking spaces. These spaces, located in front of the grocery store, have semi-permanent tables and chairs, so people cannot park their cars. Instead, pedestrians can stop and sit, grab a snack from the grocery store, and eat on their lunch breaks. 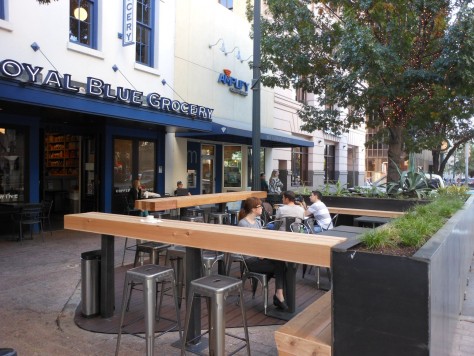 This pilot is similar to San Francisco’s Pavement to Parks program, which allows citizens to take responsibility and ownership of San Francisco streets and plazas and turn them into vibrant, pedestrian friendly public spaces. San Francisco recently developed another program, the Living Innovation Zones (LIZ’s) program, which allows artists, designers and innovators to turn city-owned plazas into spaces of innovation and exploration. Many of San Francisco’s Shareable land use approaches focus on shared stewardship models, where citizens or local organizations share responsibility, funding, maintenance and programing of public spaces. This type of model allows citizens to create public spaces that truly serve the needs of the community, and establish a more reciprocal relationship between citizens and the city, while reducing demand on scarce city resources. 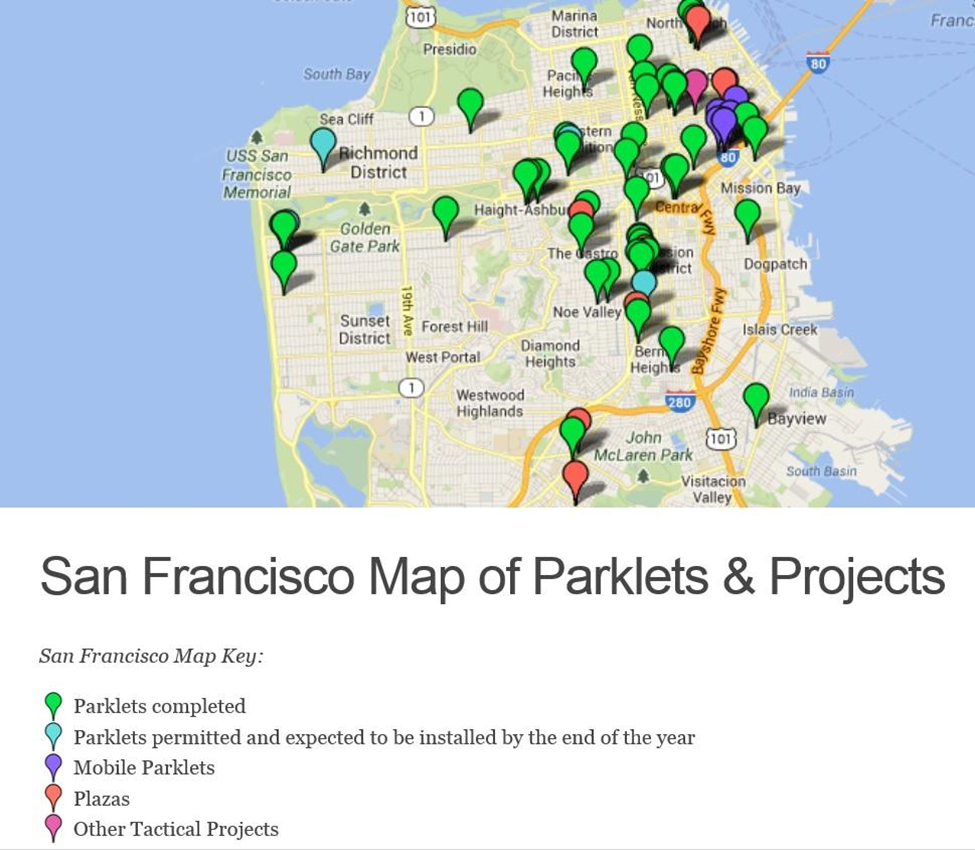 Pavement to Parks, Map of Projects in San Francisco. (Courtesy of About.com)

Despite their significant progress, both cities face similar challenges in enabling Shareable approaches to land use. In Austin, the biggest challenges related to land management and organization. The city currently does not have an accessible database with up-to-date information about its land availability. When I contacted the Office of Real Estate Services, Mashell Smith, the Property Agent Senior, was unable to tell me how much land the city owned, what was currently un(der)developed or available, or who owns which parcels. Additionally, the city doesn’t have any central vision or planning for city-owned land as a whole. Establishing a central vision and planning team for city-owned land and creating a user-friendly, accessible land database with up-to-date information about availability and current uses would help both the city and citizens work together to develop a more Shareable city landscape.

The second greatest challenge, which applies to both cities, is the land development process. This was particularly true for all of the public space projects and programs. Current permitting and planning process are not designed to fit small, creative, temporary or experimental projects. What this means is that every project has to go through the same exact process, a process designed for large scale, permanent projects. Kit Johnson, the City Architect, sums it up nicely: “We just don’t have a policy in place. So, when somebody comes up to us with a great idea, it’s like, wow that’s great. Then it’s got to go through all these processes even to see if it’s viable. By that point they’ve perhaps moved on.” The last thing cities want to do is make process so difficult that it inhibits new ideas for creative land use. Establishing flexible policies and processes scaled to fit a variety of project types and lengths is essential to enabling more Shareable land use. 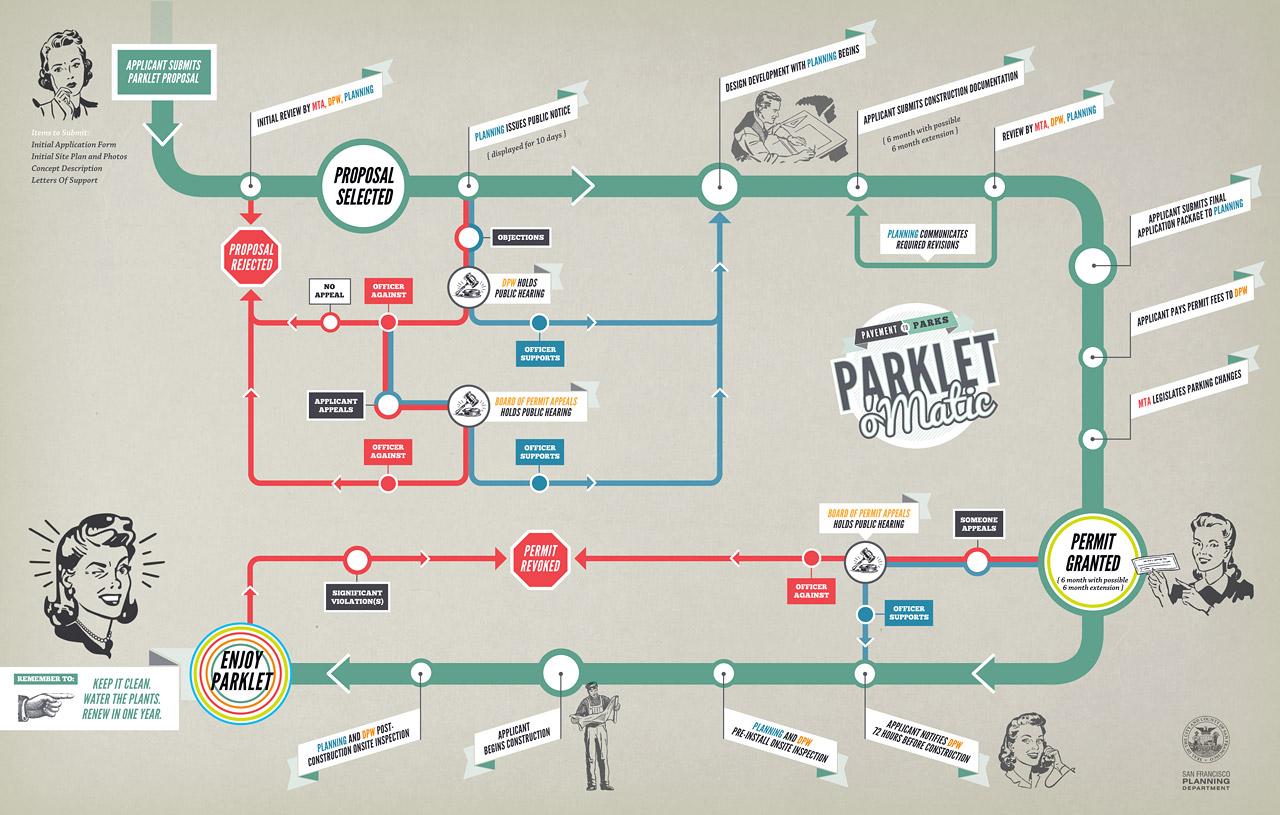 Finally, both cities show a strong need for shared stewardship of city-owned land. San Francisco already works toward a shared stewardship model through its proposed Plaza Program, an initiative to allow community organizations to take over management of existing public spaces. The responsibility of developing Shareable land use approaches should be a shared process. Everyone I’ve talked to in both cities loved the idea of sharing land, of promoting creative and innovative new uses for city-owned land, and moving toward a more equitable city landscape. But the burden of providing funding and maintenance is a consistent concern. Developing shared models, where private citizens, business owners and community organizations can become stewards of city-owned land, can expand the possibilities of Shareable land use approaches.

Land holds great potential for sharing in cities. Adapting current policies, processes and land management practices can increase opportunities for more Shareable approaches to land use in urban areas. I will continue to encourage urban leaders and professionals to view public land use through a new lens, and to consider the potential for sharing in cities as a way to improve resource efficiency, reduce inequities, and boost social capital.