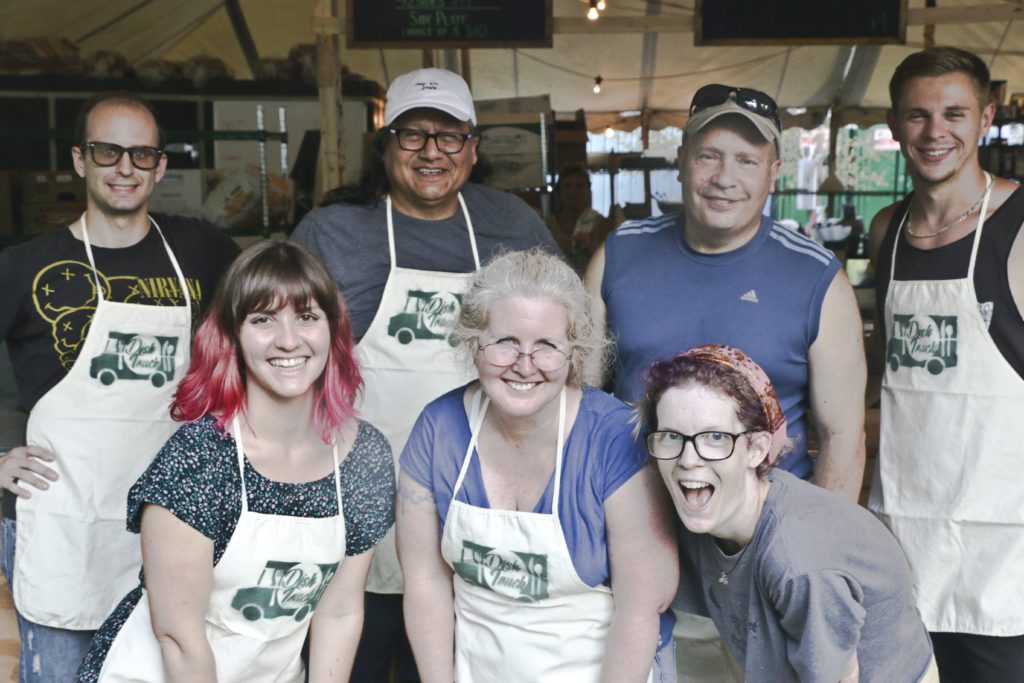 In the well-known Pogo comic strip by Walt Kelly, two characters look out somberly at a forest floor lined with discarded bottles, household goods, car parts, and garbage, and one of them says, “We have met the enemy and he is us.” This line and comic was used in a poster on the first Earth Day back in 1970, but almost a half-century later we are still grappling with how to deal with the environmental problems created by our own disposable waste. The world is waking up to the reality of dealing with 8.3 billion metric tons of plastic and other waste. This is most apparent on the local level. In Ithaca, New York, the Dish Truck is one of these efforts. Since 2015, the Dish Truck has operated as a service that allows people to reduce their reliance on disposable, single-use items by substituting reusable dishes and silverware. It does this by providing and cleaning these items before and after events.

The service primarily caters events where large amounts of waste would normally get generated, such as weddings and festivals. Joey Gates, the founder of the Dish Truck, says one of her main motivations for starting the service came from seeing the enormous amount of single-use waste and piles of garbage at festivals, where she formerly worked a henna artist and food vendor. After getting this project off the ground with some grants to purchase the initial dishes and working with a volunteer crew, the Dish Truck now hires out its services at four to six events each month, and more during wedding season and the summer.

“The first phone call I made when I was ready to launch this idea was to the Health Department,” says Gates. “They checked all the way up to the state level and as long as we were doing the wash-rinse-sanitize with municipal water or Department of Health-tested water in a sanitary way, following their guidelines, we can go anywhere in the state.” The Dish Truck also informs its clients how many pieces of garbage were offset and how much compost was created by using the service.

Gates and those who founded the Dish Truck looked at a few examples of similar projects for inspiration, including one where a reusable dish service is used at farmers’ markets in Portland, Oregon, and another one at the Hillside music festival in Ontario, Canada.

There are similar efforts in other parts of the the world, including a dish service at the University of Alberta in Alberta, Canada. A few years ago, the German city of Freiburg implemented a city-wide program to reduce the waste created by disposable coffee cups. It is called Freiburg Cup, and the program’s website estimates that in Germany alone, 300,000 coffee cups are used per hour. The program works by getting customers to pay a one euro deposit for a reusable cup, which gets refunded when they return the cup to participating businesses and deposit points in the city center.

Back in Ithaca, Gates’s Dish Truck is still in its infancy. She uses her personal vehicle to move dishes between catered events and a commercial kitchen. She also works full time at Cornell University’s Clinical Programs Office, focused on helping “students move beyond the classroom into the world of practice” and co-teaching a course called “The Law and Policy of Food Systems.” In the future, the Dish Truck will be able to provide more granular greenhouse gas reduction, water use reduction, and fossil fuel use reduction data to make all of these benefits more visible to users.

Waste is a social issue that goes beyond environmental damage, Gates says: “Our mission has a pretty broad thought process behind it. There’s the simple act of washing dishes. There’s also the thought process [around] things such as the social justice issues of garbage and the lower-income communities who tend to host our garbage dumps.” Since it is still volunteer run, the idea is also to turn the Dish Truck into a worker-owned cooperative, which would generate some income for those who keep it running.

The timing couldn’t be better, since now even recyclable waste poses a problem. “What people have to come to terms with is that we can no longer have this linear economy of extract, refine, manufacture, ship, consume, throw away… so in the short term, there’s a huge problem of our recyclables not having a place to go,” Gates says. “But in the problem, as always, lies the solution.”