Imagine going to a job interview and already knowing exactly how much everyone else at the company earns? Wouldn't that make those questions about "salary requirements" much easier to answer?

That's exactly what happened to one recent hiree at the Berlin based IT firm Tesobe, which has initiated a new movement in banking called the Open Bank Project. They are creating an API, an interface which allows developers to create programs that can communicate directly and securely with your bank.

Many of you might be thinking that this project is similar to Mint, but nothing of the sort. Mint is what's known as a screen scraper, a bot that logs into your bank pretending to be you, it's not secure and is not customizeable by users, whereas the Open Bank API operates behind a firewall and allows creative minds to come up with new twists.

What this means in practice is that developers and designers can create custom apps for you to use your banking data in ways you never thought possible, like sharing your bank balance with people you choose by using the Social Finance web application.

Tesobe uses the Social Finance app to publish their banking data online for all to see, that way everyone knows at all times how the company is doing, thus eliminating taboos about discussing income among employees. But this is only one of many possibilites.

Simon Redfern, Tesobe's CEO, emphasizes that by using Social Finance you can adjust layers of transparency, which can be observed by the omission of actual names, i.e. "Client X" or "Developer C".

Now imagine NGOs using this API to publish their accounts. Or corporations and governments, without anyone to massage the data in between. Transparency International is already setting an example by using another app called CashTrack.

The project grows in new directions thanks to Hackathons that are aimed at creating new apps. The last Hackathon I attended in London was chock full of geeks and I got to see the final presenatations of the different teams who created some interesting apps. One team developed a prototype that can work with google calendar by allowing your friends to "reserve" you via your gCal and enter the amount of money your evening will cost, the API then transfers that money from your checking to your savings to earmark it for your night out. At another hackathon in Brazil, one team came up with an app called MoneyJourney that tracks money moving around the world in 3D. 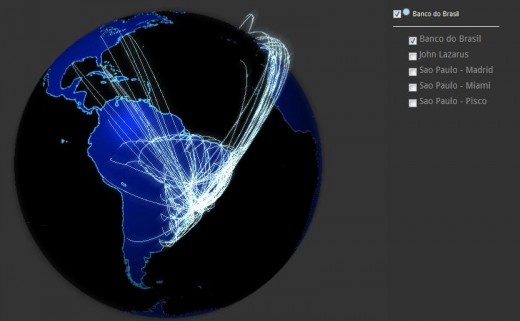 One avid supporter of OBP is an ethical online marketplace in Germany called Fairnopoly, which was the second largest crowdfunded project in Europe. To remain transparent with their crowdfunders, they use Social Finance to keep their accounts online. Felix Weth, CEO of Fairnopoly says, "Open Bank opens a completely new perspective in corporate transparency".

The next Hackathon is scheduled for March 21st in London at Canary Wharf, a major European financial center. Sign up if you think you might have something to contribute to the growing number of apps using OBP.