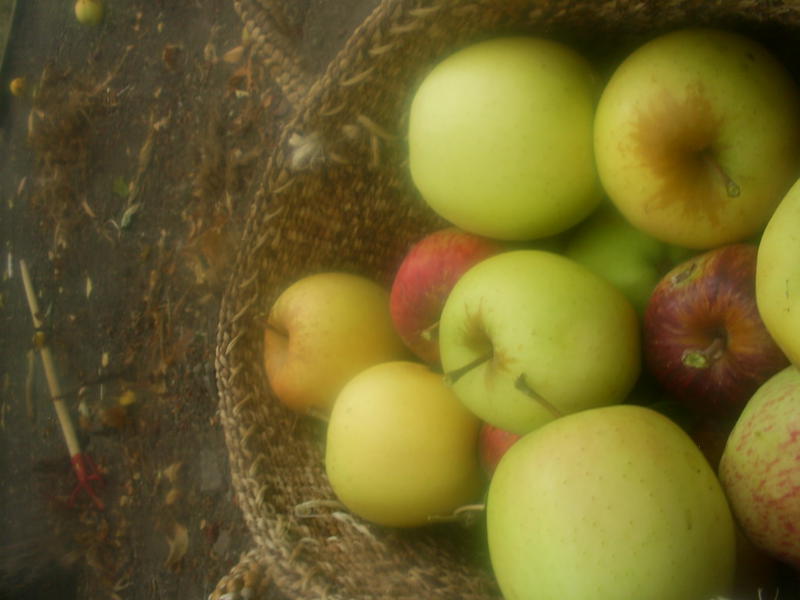 Spring is right around the corner. The icicles are melting, the first buds are getting ready to pop, and another season of birth is about to begin. Yet, for Asiya Wadud, spring carries a treasure bigger than just the good feeling of a fresh start; it has a secret antidote to the recession blues: Fruits. Shared. Freely. In Community.

Through her efforts at Forage Oakland, Asiya is showing how the blessings of spring can transform peoples' health, their pocketbooks, and their communities.

When she first moved out to California from Washington, DC in 2004, Asiya recalls, “I was struck by the crisp smell of citrus in the air. I can still remember it today – it's so poignant. Everything felt so fresh and alive, and I was immediately taken by it.”

That excitement and energy lay dormant for a couple years until, after working in a school garden and becoming more knowledgeable about fruit tree identification, Asiya moved into a new neighborhood: “There, I started noticing more than just the citrus. Apples, pears, persimmons, passion fruit… anything that you could find at the farmers' markets, you could find in backyards in my neighborhood in Rockridge, in north Oakland.

“So, I started making these really small micro-maps of a five-block radius. In the first map, I had more than 20 different fruit trues. It was really an awakening around this abundant fruit. At the same time, I started noticing how much of it was going to waste. It was appalling. And it was a call to action.”

Asiya's first maps located the fruit trees of neighbors she'd decided to talk to about harvesting. In every case, the family said to her, “We're not able to use all the fruit that we have growing, so you're always welcome to come by and harvest whenever you like.” 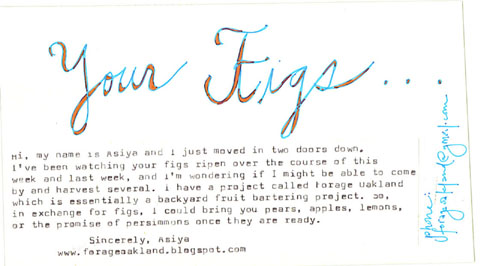 Asiya continued with these micro-maps for a few years, handing them out to friends: “I thought there would be potential for mobilizing people around the sharing and distribution of this surplus fruit.”

Then, in 2008, she started thinking in earnest about ways to involve more people in the project. And that's when Forage Oakland was born. It's a fruit barter network for people in north Oakland and south Berkeley. Anyone who has surplus fruit can trade and distribute it with others in the neighborhood.

The mechanics are simple. You'd send an e-mail saying, “I live on King Street. I have plums and I'd like to receive apricots.” Then Asiya, or one of Forage Oakland's volunteers, would come by, harvest the plums, redistribute them to folks who want to receive plums, and, when they are in season, deliver apricots back to you. That's how it's been working for the last few years.

But recently, Asiya been receiving e-mails from people who don't have fruit trees but still want to be involved. She is now trying to add an additional component where people can offer their time and labor in exchange for surplus fruit. She's also trying to automate the system, so it can be expanded to other neighborhoods in Oakland and thereby involve more people. Even further to that, she's trying to figure out ways to get fresh fruit to folks in the community who are most in need.

“A woman who works at a hospice organization for low-income seniors recently sent me an e-mail asking if Forage Oakland could help get fruits for them. Even with all the harvesting we do, there's so much that goes by the wayside, mostly because of a lack of time. By re-organizing Forage Oakland and involving additional labor in exchange for fruit, I hope to get food to people who have been historically disenfranchised from having access to fresh fruit,” Asiya explains. 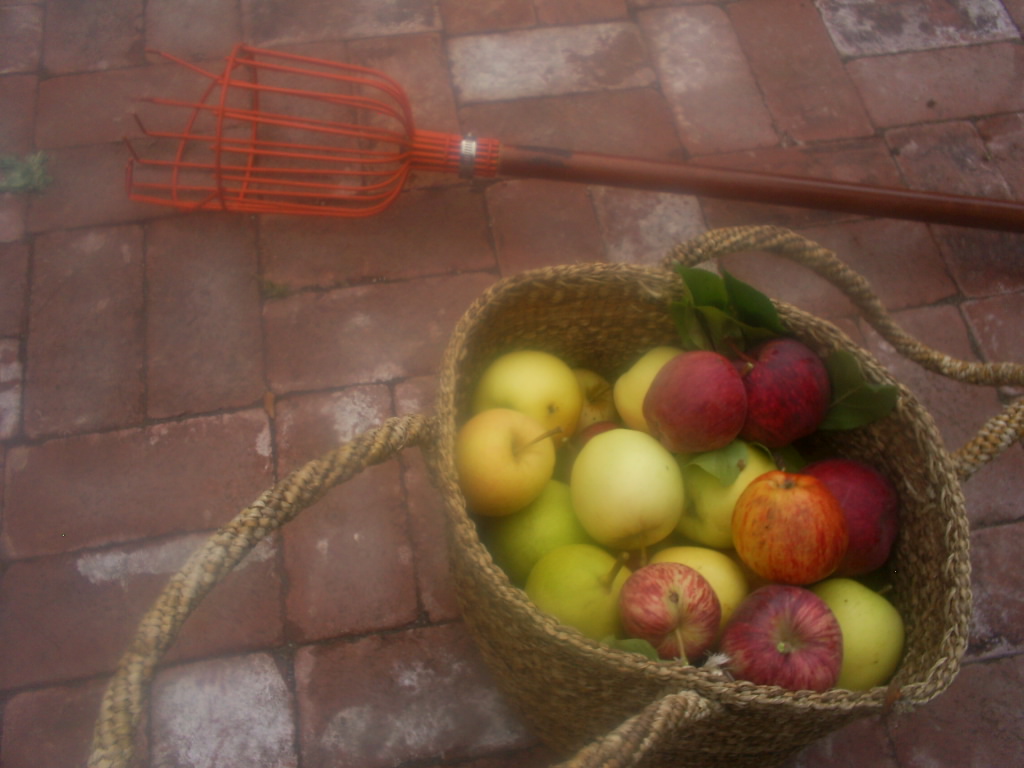 Forage Oakland is also increasing people's awareness about the food in their neighborhoods and encouraging them to 'forage' connections with their neighbors. Asiya's monthly marmalade and jam exchanges add another layer of connection to the mix.

“It's all too common in cities to see your neighbor once or twice a year, or to never have met them at all. At the same time, food is so basic and so necessary, and it unites all of us. We can bring people together around this common desire,” she says.

Forage Oakland responds to the growing desire for sovereign, locally based, and community-owned food systems. Asiya elucidates, “There's power in knowing exactly where your food comes from, in knowing whose hands touched the fruit, who harvested the fruit, in having a direct connection, choice, and ownership over what you're eating.”

“If money were involved, it would exacerbate the problem of inequality and lack of access. Because then, only those who could afford it would be involved. But I'm trying to build a community here, which means including anyone who wants to be part of it, whether or not they could afford fresh fruit. So, it's a core principle of Forage Oakland. Donations are okay, to help support the work, but no money.”

What if people ask to buy the surplus fruit? Asiya lets them know, “This is a community-based project which works to benefit the community. The fruit is meant to be shared within the community, in order to strengthen the community.”

Asiya is open to monetizing a small part of Forage Oakland in the future, like a youth-run farmstand of excess fruit to benefit youth programs in the city, but clarifies that it would need to have solid principles and guidelines.

Over the last few years, many other urban harvesting projects have been popping up like Forage Berkeley and Forage Marin. In countries like the UK and Brazil, which have a long history of bartering, these networks are becoming more formalized. Asiya anticipates this trend will only continue, as the whole localized food movement becomes more of a common language and topic of interest. So far, there are 200 people in the network in north Oakland and south Berkeley who are sharing their fruit enthusiastically without a penny in exchange.

Learn more or join them on the web at Forage Oakland.

In addition to Forage Oakland, Asiya Wadud works at the Oakland Food Policy Council. Its mission is to create a sustainable food system in Oakland where fresh, healthy, and affordable food is available for all in the city. One of their directives is to explore the waste stream of food in the city, which Forage Oakland's mission is directly addressing.

Shilpa Jain is currently working as the Education and Outreach Coordinator of Other Worlds, an organization focused on promoting grassroots alternatives and as the program director of YES!, which supports

Shilpa Jain is currently working as the Education and Outreach Coordinator of Other Worlds, an organization focused on promoting grassroots alternatives