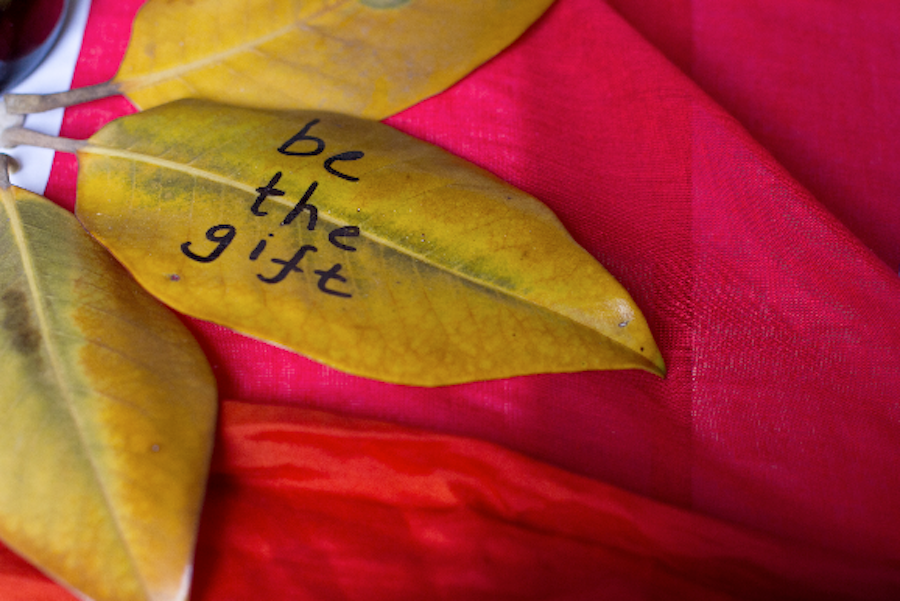 After days of fragrant, sun-filled skies, the weather did an about-face and turned stormy on my fourth morning walk through Trastevere in Rome. The black marble square tiles that make up the street paving in this ancient section of the city became slippery with the rain. I wrapped myself in my wool shawl and made a break for the door, trying to avoid slipping and being soaked through and through.

Once inside the building, annoyed at being wet and wondering if I would find time to change later, I made my way to the lobby and looked out into the courtyard. Outside, some of my Giftival companions danced in the rain, spinning like loving dervishes in happy smiles, comfortable shoes, and light cotton shirts. My annoyance at the inconvenient weather melted away as I watched them in their revels. That was my first gift from Giftival that day. There would be many, many more on that day alone.

Giftival participants gathered in a circle for a closing ritual given by Woman Stands Shining (Pat McCabe), an activist for Right Relations from the Dine (Navajo) people.

The gifts given at this gathering were innumerable, to be honest. Physical gifts pre-made and brought with the intention of sharing; impromptu creations; physical and emotional care-giving; the gift of listening; story-telling; the gift of participation; the gift of unquestioned acceptance. The participants were called to the gathering from around the world, all creatives consciously utilizing the gift-economy in their work in the world and in their lives.

Among the fifty people gathered in Rome, there were representatives from India, Turkey, Mexico, Mali, Egypt, Brazil, Japan, and Zimbabwe, as well as several areas of the US and Europe. Some represented cultures that never stopped participating in the gift-economy; some represented an attempt to re-ignite the gift in cultures long since given over to the deprivations of neo-liberal capitalism. 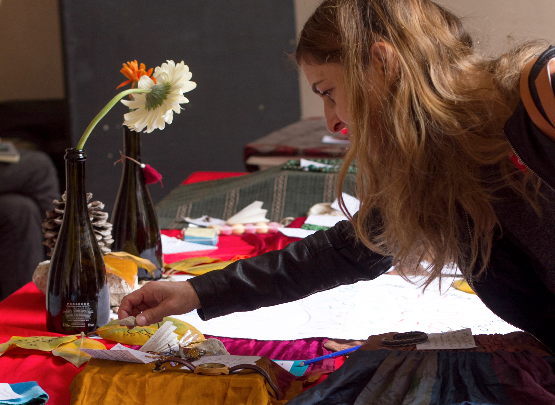 Shop of the Open Heart at Giftival

Each co-creator had at least one focus. There are too many to list here, but I can mention a few: Manish Jain, one of the conveners of the group, focused on the gift economy and education; Robin McKenna is a filmmaker interested in gift culture, Rita Tojal and Yvonne Cuneo both focus on community and eco-villages. There were several people interested in group facilitation, including Alpha Lo, the pioneer of the Gift Circle. Kevin Flanagan came to represent P2P economics; Stephanie Rearick and Ayşegül Güzel are leaders in timebanking; Judith Lieberman came bearing stories; and there were many present deeply invested in community work, facilitation and social justice. Most were experienced leaders in their own right and deeply interested in what might emerge with all of us together. There was a palpable curiosity in everyone there. We all knew that each attendee held a seed of wisdom. You had only to sit down and start a conversation to find it. 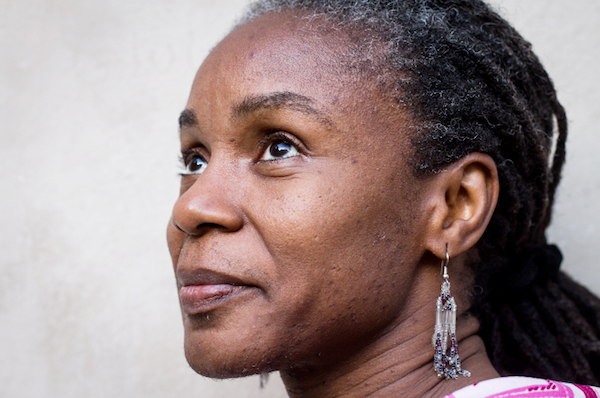 I've been lucky enough to be able to attend many gatherings focused on economic and “new story” change over the last several years. All of them disappointed me in their structure, with hierarchies either implicit or explicit alongside the old trope of “those who know” lecturing to “those who don't know.” This all becomes wearisome, and no matter how enlightened the organizers or the gathered crowd, this old model seems to be dredged up like a comfortable old blanket on a cold night. 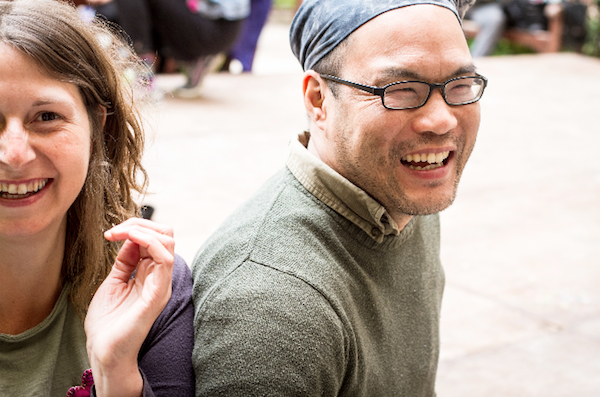 Giftival participants Rita Tojal and Alpha Lo. Rita is an eco-village activist and founder of Olhos Verdes. Alpha is the co-author and co-editor of the Open Collaboration Encyclopedia, a facilitator, and pioneer of the gift circle.

The Giftival convenors, however, did not reach for the comfort of this blanket. They opened the space for co-creation only, and people stepped into the gathering when they felt called and offered group processes, stories, playful exercises, dance, and rituals that deepened our relationship not only with each other, but to the inner and outer work required of us as changemakers working in the gift. We even created impromptu flash mobs at the Pantheon and the Vatican, bringing the process work out into this beautiful, eternal city. And we laughed, and talked, and hugged each other. A lot.

I left Rome bearing idiosyncratic gifts from my new tribe at Giftival. A bracelet, a pin, a leaf inscribed with an injunction against materialism; new friends and a strong sense of community; new process work and creative group activities to bring back to the US; a deeper understanding of the praxis of gift culture as opposed to its sometimes overly theoretical underpinnings. And yesterday, when storm clouds opened up as I walked with my children from my car to my house, instead of running inside, I remembered my time at Giftival and we danced under the verdant spring greenery until we were soaked, laughing as the glorious rain drenched us to the bone.

I am an archaeologist by training, but found myself much more interested in the modern stories of our culture than any ancient ones being thought up by academics. In addition to stories,

I am an archaeologist by training, but found myself much more interested in the modern stories of our culture than any ancient ones being thought up by academics. In addition to stories, I'm interested in activism and transition. I am on a great team of community builders that is Transition Town Media, and with their support founded the Media FreeStore and Timebank Media. I am also passionate about issues relating to local food, herbal medicine, traditional cultures, new-story education and local economic resilience. For my day-job, I work in the gift with author/philosopher Charles Eisenstein.

Things I share: Stories, time, skills, smiles, child-care, herbs, and whatever resources I have at the moment.