Getting Hip to Brooklyn Sharing Culture - Shareable
Skip to content 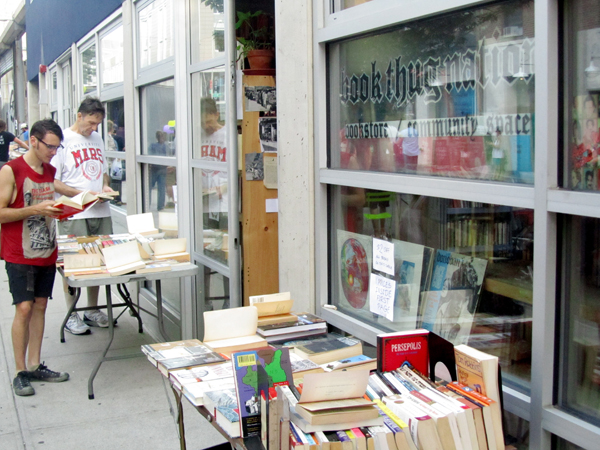 Living in America's second most expensive city can be taxing. Brooklynites work long hours just to afford basic needs, let alone the elusive and presumably high price-tagged Good Life that so many have flocked to the city in order to find. The notion of being a cog within the metropolitan machine often lead me into a bleak mindset. Perhaps it was this sort of feeling that gave rise to my interest in a course called Death offered by the Public School last summer.

On the morning of the class, I awoke on the couch of a friend’s Bushwick apartment. I biked 5 miles to the Greenwood Cemetary in South Park Slope, finding 15 others assembled near a central pond. The lush cemetary held the graves of New Yorkers who had chosen to assert their creativity against the grey and unforgiving city. These were people like the radical street artist Jean-Michel Basquiat, abolitionist Henry Ward Beecher, labor leader Paul Hall, and Peter Cooper, the founder of the free university Cooper Union. As I sat in the cemetery listening to Jonathon’s lecture on Socrates’ notion of the afterlife and a philosopher’s quest to learn how to die, I felt strangely at odds with the grim subject matter.

Even in Plato's Phaedo, which was that class' topic, Socrates had an idiosyncratic glibness in the face of his execution — his mind happily ruminating on his life's work accumulating knowledge and virtue. An inspiration, an urgency to do more while amongst the living overcame me, a feeling entirely brought on by the knowledge that my presence there had been supported by an improvised network of mutual aid.

I had acquired my copy of the reading in a trade with the Williamsburg bookstore Bookthug Nation. The bike I had ridden to the class had recently been in a minor scrape on the Williamsburg Bridge, causing a wobbly wheel which I was able to true at the free cycling repair workshop at Time’s Up!

Institutions like these are part of the improvised and moneyless infrastructure increasingly developed by those who can afford little else. Similar projects to reduce cost or offer free services for nearly every aspect of life (aside from rent, as far as I can tell) are in the works all over Brooklyn. Here are some more details on these innovative upstarts:

Having a reliable bike in New York is the first thing I recommend to any able-bodied newcomer. A good bike makes even far-off destinations within the vast city well within reach, and with MTA prices perpetually rising, cycling is easily the quickest and most affordable mode of transportation.

One of the longest lasting free culture institutions in New York is Times Up!, the radical environmentalist cycling-focused collective which for years has organized bike rides and repair nights. Although they lost their primo Houston Street space a few years ago, they now operate out of the basement of ABC No Rio, and at a near Williamsburg spot directly under the bridge. On Monday and Wednesday nights, the workshop quickly fills with area cyclists who need anything from a patched tube to a full overhaul. It can get crowded and hectic, but the energy is always positive and everyone is helpful, although filthy with grease and sweat.

With the widespread implementation of chip-activated turnstiles, sneaking into lectures at major Manhattan Universities has become a challenge in recent years. Fortunately, social networking has developed a potential solution. The Public School brings the academy out of the university by allowing users to self-organize classes in parks, cafes, and at their New York base at 155 Freeman Street in Greenpoint.

The curriculum is based on user's proposals on the site. Groups of users indicate their interest in the proposed class, designate volunteers to facilitate, work out a meeting point, and develop a curriculum. Sometimes this is done with the guidance of one teacher, like Jonathon and his course on death. Other times, the class is entirely horizontal, like the Anti-State Communist Reading Group last summer.

Not all courses are philosophically focused, either. The Public School has held classes on grant writing, circuit-bending and shoe repair. In a way, the Public School offers anything a regular university could. Besides the crippling debt and degree, of course.

This past July, miscreant technophiles and keyboard magicians from around the world converged in Manhattan for the ninth Hackers on Planet Earth (HOPE) conference. Featuring workshops and lectures on online security and anonymity, social programming, and even competitive lockpicking, the conference has become a vector for cybernetic counterculture.

In Boerum Hill, the fun continues year round at the NYC Resistor. The hackerspace, co-organized by Makerbot maker Bre Pettis,  is one of Brooklyn's many shared workspaces of which coworking is a huge component.

Coworking has boomed in Brooklyn. It's an alternative to the laptop and wall-outlet Risk game of coffeeshop commuting; these are workspaces for collaboration, encouraging sharing of resources and ideas in an effort to create an environment less boxy than the Millienial-despised cubicle. Other coworking spaces less bent on chaos include the arts-friendly 3rd Ward, Bushwick's Bat Haus, Greenpoint's The Yard, and the friendly radicals at Not an Alternative. You can find them all at Loosecubes, a marketplace for coworking and other work spaces founded in Brooklyn.

With such forward-thinking enterpreneurs converging, crowdfunding and cottage industries are logical conclusions. It's no surprise, then, that on a Sunday afternoon, several neighborhoods in Brooklyn have emerged as meatspace iterations of Kickstarter and Etsy (headquartered in DUMBO and Greenpoint, respectively). Farmers markets and food-cart smorgasboards are filled with Kickstarter-funded operations, and events like the Brooklyn Flea and Renegade Craft Fair are like browsing Etsy in first life. Whether the "Brooklynization" of the creative industry will liberate the semio-proletariat is a matter of debate, but we can be certainly not call these upstarts business as usual. 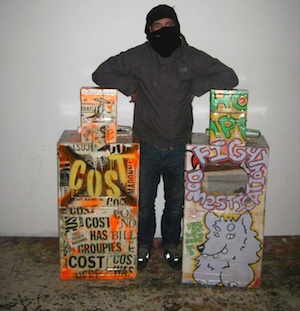 Summer in New York is known for its daily free concerts, public movie screenings, and numerous public beaches—but New York is also increasingly known for its DIY entertainment scene. Showpaper, a collective publication put out by a rotating cast of Brookyn indie rockers, lists dozens of underground shows each month, many of which can only be found in Showpaper or word of mouth. Find them in the colorfully repainted reappropriated newspaper boxes around North Brooklyn.

If the cinema strikes your fancy, the film collective at the Spectacle in Williamsburg offers a low cost alternative to the major theaters ($5 per movie!) and runs as an easy-to-join collective. After a mere month of volunteering, collective members are able to contribute to the programming, making the theater open-sourced and participatory. Upcoming screenings include Battle Royale, a selection of Alexander Kluge films, and Heathers. 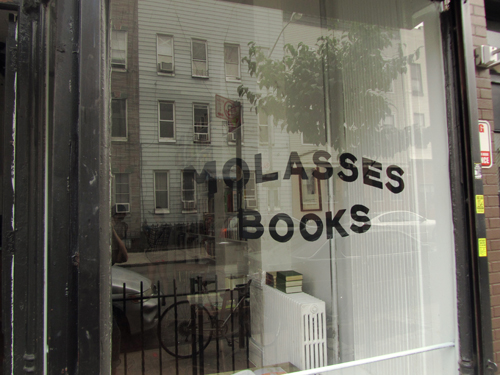 If you’re like me, you often find yourself in a situation where all of your coffee and books are simultaneously consumed and you are in desperate need of new batches of both. A new bookstore in Bushwick has found a solution to this all-too-common problem. Molasses Books on Hart Street is a normal used bookstore/café, except it has cut out the cash middleman in the used book-to-coffee exchange. Last week I went into Molasses and traded two books for a cup of coffee and a copy of Salinger’s Raise High the Roofbeam, Carpenters. Co-owner Matthew Winn says he’s not doing anything special. “We operate like a normal used book store, we offer credit of 30% of how much we think the book will sell for," he says.

Nonetheless, the novelty of cashless exchange has garnered the store much attention. As for profitability, Winn hopes a forthcoming license to sell beer and wine will be the key — although it might mean he’ll have to turn down a few books for exchange.

Urban homesteaders and loft-dwellers alike are becoming unlikely carpenters as they build their niche in the ever-cramped city. The typically costly projects of renovating living spaces sorely necessitates anti-Home Depots. Build it Green in Queens is such a spot. Selling largely used and salvaged hardware, Build it Green emphasized perhaps the most vital aspect of the recycling triangle: reuse. Their warehouse in Astoria is filled with perfectly good materials, ranging from windows to marble to refrigerators, that would have otherwise ended up in a landfill. For artists, Materials For the Arts, also in Long Island City, provides the same function.

While organized dumpster diving has been going on at least since San Francisco’s Diggers, New York has birthed a new spin on free-living called Freeganism. Launched by Adam Weissman nearly a decade ago, Freegan.info gives NYC divers a place to share intel on the best spots to get free food after dark. Until recently, the site also organized free "trash tours,” showing squeamish first-time divers good places to find food and how to retrieve it with proper etiquette (tying up the bag and not leaving a mess on the sidewalk.) In the past, New York Freegans have also organized parties, "Really Really Free Markets," bike repair shops, and of course, dinners. 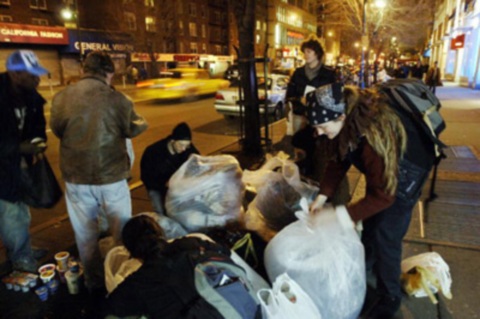 Image courtesy HowStuffWorks under fair use.