Free Food Versus The Law - Shareable
Skip to content 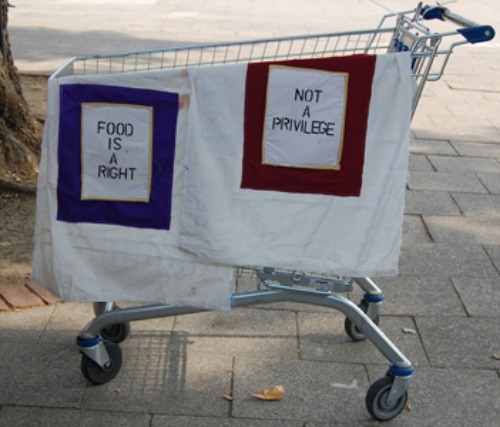 With the rise of gentrification and the “Broken Windows” policy of successive New York mayoral administrations, squats, once a common social form in the city, have become rare and embattled. So it was real luck that allowed me to live in a squat in Brooklyn for a year. Ours formed accidentally. We had all moved in as strangers who found the place on Craigslist, with the intention of paying rent for our rooms. But strange things kept happening in the building, including an illegal hostel, and intimidation during rent collection by the landlord’s agent. Over time, by investigating public records, we figured out that our building was completely illegally divided, and that our ‘landlords’ were actually criminals who had made up phony documents and scammed the building’s owner once it was in foreclosure. We went on rent strike, they tried to evict us, and legal battles over the space continue to this day, though most of us have moved out.

One of the beautiful things about living in a squat is the ability to be unemployed for long stretches without massive anxiety. Of course, it’s never easy to have no money, but in return you get a lot of time. If it weren’t for my months gainfully unemployed, provided by the lack of rent, I might never have gotten involved so deeply in the political organizing or with the writing communities that now shape my life in New York. We fed ourselves while squatting by eating almost entirely dumpster-dived food, and that’s where my roommate, Jon, hit on the idea for doing food donations.

Jon approached a local bagel store, which, like all bakeries, threw out pounds and pounds of baked goods every day. Bakeries just can’t sell day-old bagels, or baguettes, or croissants, or pastries, etc., even though they’re still delicious, so they throw them out. Any even amateur freegan knows that bakeries are usually good for a big score. Growing up in Boston, where everything shut down pretty early for a city, if my friends and I got hungry late at night we knew there’d always be a fresh donut or bagel available at one of the many Dunkin Donuts’ dumpsters.

The deal Jon worked out was that every evening, when normally they’d throw the bagels in the trash, he would go to the store and pick up the bagels instead. We would keep however many we wanted for our house, then deliver the rest to a food bank, homeless shelter, crisis shelter or soup kitchen in the neighborhood. I started helping Jon with this endeavor after he’d been doing it for a couple weeks, and because of my help we could approach even more bakeries. Spending about an hour a day, we were diverting pounds and pounds of food from the trash toward people in the neighborhood who needed it.

It was really a win-win-win situation. The workers at the bakeries hated throwing out all that food they had made everyday, and were glad that it was being redistributed in the neighborhood. The bakeries also saved on carting costs. We always had a ton of bagels and baked goods on hand, and whenever I headed to a meeting or party I could bring enough to feed everyone. The food pantries and shelters could rely on a couple hundred baked goods once or twice a week, and by providing bread products we were giving struggling people in the neighborhood staple foods. Sometimes, if we had too much, we would just pass food out on the street.

Of course, it helped that we were in a dense urban area like Brooklyn, where there are locally owned bagel shops and bakeries, which are more willing to donate food to a couple of guys without a non-profit organization. It was helpful, too, that because we were squatting we didn’t have to work as many hours, which allowed us more free time to give back to the community.

But it certainly wasn’t difficult, and I think that anyone in any community with a bakery and a food pantry could do this. All you have to do is talk to the bakery workers. In my experience, they are usually more than delighted to receive the help. You do have to realistically anticipate how much you are willing to do (they throw out food every day, remember) and schedule accordingly, but there’s no reason you couldn’t start doing this tomorrow if you wanted to.

Unless, of course, you live in New York City and want to donate to an official city shelter. Recently, New York’s Mayor and Second Richest Man Michael Bloomberg outlawed the donation of food to city homeless shelters. Was there a case of food poisoning? A rash of sick homeless folks? No, he did it because the city couldn’t control the salt, fat and oil content of the food. In other words, the Bloomberg administration is claiming it’s disallowing food donations for the good health of the homeless population. Using paternalistic concern for their waistlines and their blood pressure as a screen, Bloomberg is doing nothing other than stripping food from the mouths of those who have the least, and guaranteeing that tons of food end up in landfills rather than the kitchens and hands of those who could use it most. And why should the city even want to control what the homeless eat, let alone be able to? Do they think the workers in the shelters and the homeless themselves are unable to decide?

All across the country, legistlatures are making laws that make it more difficult to pass out food. As the Black Panther free breakfast program demonstrated in the sixties and seventies, Food Not Bombs has shown for years, and Occupy Wall Street has embodied more recently, the simple act of feeding people for free has large political implications, and state and local governments are more than willing to starve the poor and the homeless in order to maintain political and economic control.

But we don’t have to take it. On April 1, Food Not Bombs has made an open call for a day of protest against these arbitrary and cruel laws. Even if there isn’t a local Food Not Bombs chapter near you, you can join the protest by simply setting up a table and feeding people in your area on the first. And if you’re more interested in long term work, I suggest getting in touch with local bakeries and doing the simple redistribution that I described, or finding local food banks and shelters to work with. They will have an idea of what work needs to be done.