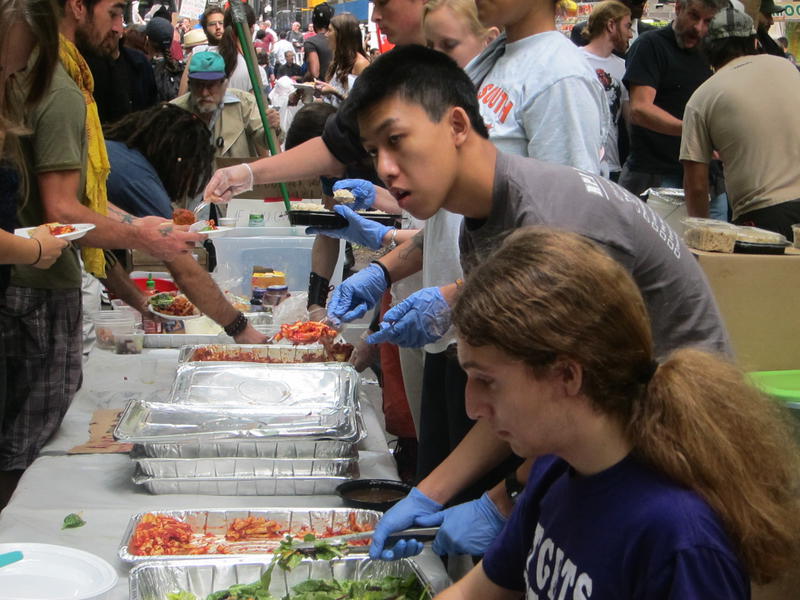 Most media attention for the Occupy Wall Street movement has focused on deciphering a political agenda or categorizing participants as anti-American. Despite the government disregard for Constitutional rights, police violence, and decentralized decision-making, citizen occupations continue to exist all over the world.

What the media hasn’t highlighted is the army of volunteers working behind the scenes to keep Occupy Wall Street focused and learning. (Two things that are impossible on an empty stomach.)

Existing food co-ops, farmers, and nutritional professionals are feeding the 99% and collaborating to teach occupiers about the food system, why it’s broken, and how communities can band together to fix it.

LUNCH AT ZUCOTTI from ONE PACK PRODUCTIONS on Vimeo.

The potent combination of knowledge, food, and inspiration available in OWS communities attracts an entirely new cross-section of Americans who formerly felt powerless to affect change. While the tent cities might not last forever, Occupy Wall Street has encouraged many who were previously silent to begin working, sharing, and growing in their own communities.

Yet, the direction of our country is shaped largely by decision makers who often fail in their charge to promote the general welfare of their constituents. But even radical policy change won’t fix all of these problems. Working together, however, we can start to create solutions in a way that involves and respects all members of our individual communities.

So why wait? Whether the movement as we know it lasts another month or another year, it is the skill and resource sharing that will make a lasting impression and affect real change.

This is the larger positive legacy of OWS. And in this way, it has already succeeded. 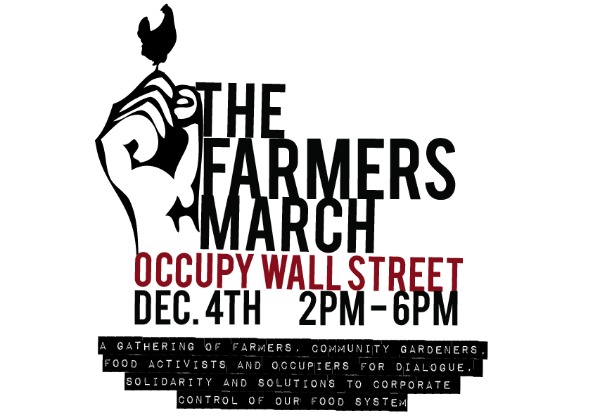 On December 4th, farmers, community gardeners, food activists and Occupiers will come together for dialogue about what’s going on with our food system. Everything, from agricultural policy to environmental impact is open for discussion.

“My take on why we are staging the Farmers’ March is multifold,” said organizer Vevlyn Wright.

1.  To bring together those along the food chain to talk about how we, the people can take control of our food system from corporation;
2. To share ideas about changes in system;
3. To commiserate and also share strife and successes;
4. To inform individuals inside and outside of our respective circles about the problem in the food system, so that they can be empowered and equipped to fight to put it back into community control.”

At 2 pm on Sunday, all who care about the future of our food supply are invited to gather at LA Plaza Cultural where 9th Street intersects with Avenue C. At 4pm, there will be a march toward Wall Street, culminating in a circle of solidarity and seed swap at Zuccotti Park.

“The Farmer’s March is a celebration of community power to regain control over the most basic element to human well-being: food,” said Seth Wulsin and Paula Winograd,  who are two of several organizers. “The food system has been taken over by multinational corporations to the detriment of communities, ecosystems, local economies, and soil all over the world. We march for urban/rural solidarity, to share the solutions that are already happening, and to strengthen our regional food networks based on the basic principle of food justice: that access to fresh, healthy, affordable food is a human right.”

Seismologik Media and One Pack Productions (the creative minds behind the video short above) will be on hand to film the Farmers’ March and interview participants. December 4th will be the official start to filming of their feature-length documentary about Occupy Wall Street.

“This will be a beautiful, and symbolic action, said Winnie Wong of Seismologik Media. “On Sunday, we’ll be out with our team filming, and we’re so excited to make new friends, and to capture and share their inspiring stories with you.”
Even if you can’t make it to Zuccotti Park on Sunday, there’s still a way to help support the documentary project. Please check out Occupy Together: The Short Films on IndieGoGo and consider contributing to their crowdfunding campaign.