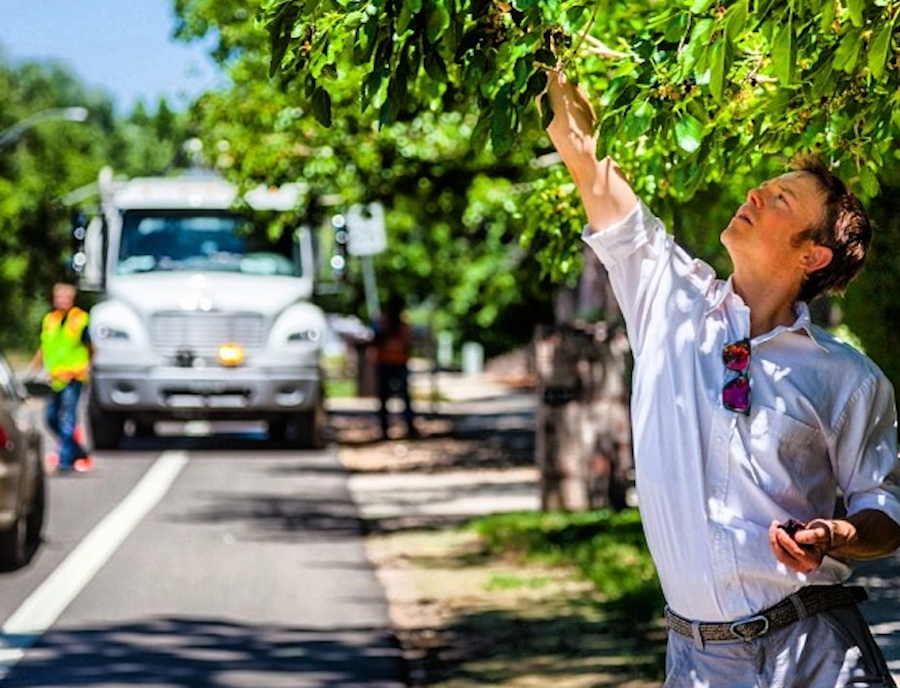 by Caleb Phillips with input from Ethan Welty

In 2008, while living in Boulder and working toward a Ph.D. in Computer Science at the University of Colorado, I created the original Falling Fruit. Inspired by Urban Edibles, a foraging map for my hometown of Portland, Oregon, I sought to create a similar one for Boulder. I started by expanding a map created by Marco Lam and his students at Naropa University. More than pointing the way to free lunch, I hoped to remind Boulder's denizens that fruits and vegetables don't grow on grocery store shelves, they grow on plants – including those many neighborhood trees from which they fall, unused, to quietly stain our sidewalks.

After a few years of me and my friends filling out the map with our favorite fruit trees, I met Ethan Welty, a geographer, photographer, and glaciologist at the university with a similar passion for urban foraging. Together we hatched a plan to create the most complete foraging map possible, uniting past mapping efforts by foragers and freegans on a software platform dedicated to the mapping of edibles. Ethan brought to the project a knowledge of existing city and university tree inventories which we could mine for additional edible species. Over the course of a couple months and thousands of emails, often working late into the night (and borrowing time from other projects), a new Falling Fruit emerged.

In March of 2013, we launched the website with hundreds of thousands of locations around the world – from fruit trees and fungi to water wells and dumpsters. Most of the sites are on public property and free for anyone to harvest, while some are private, to be plucked with permission.

We were uncertain how Falling Fruit would be received but it has been welcomed with open arms. Strong, supportive user communities have formed in unexpected places – places like Warsaw, Poland; Cambridge, England; and South Bend and Goshen, Indiana. Thousands of people visit the site every day. We have data on all seven continents, in 51 countries and 1,500 cities. Because anyone can add to or edit the map – even anonymously – it is, like Wikipedia, a common resource, by and for its users. To formalize our commitment to the cause, this year we incorporated as a nonprofit (bringing on Jeff Wanner as our third member of the board of directors), secured 501(c)3 federal tax-exempt status, and assembled an advisory board.

Today, Falling Fruit is the world's largest foraging map, and the only one (to my knowledge) to be fully open source and open data. On this massive, collaborative "wikiwikimap,"—the use of the term wikiwiki is a nod to Ward Cunningham in Portland, who created the first wiki—thousands of citizen cartographers are exploring and growing our collective knowledge of free and harvestable food around the globe.

We are currently hard at work on a mobile app so folks can find and add locations of free food no matter where they are. (App development was made possible by the backers of our spring crowdfunding campaign – thanks y'all!). We are currently translating our platforms into other languages so that our service can be accessible to folks no matter what language they speak. And we continue to grow the map, mapping nectar and pollen sources favored by honeybees and other pollinators, expanding our map of "fruiting" dumpsters to raise awareness about food waste, and mapping food-bearing plants in yet more cities around the world.

We need you to help us help you (and your neighbors)! Here are some ways:

Dr. Caleb Phillips is a scientist, technologist, and food waste activist. He is the co-founder of three 501(c)3 nonprofits: Falling Fruit, a massive collaborative online urban foraging map, Boulder Food Rescue, sustainable just-in-time food rescue in Boulder, Colorado, and the Food Rescue Alliance, an incubator for sustainable food rescue programs. He spends his days at the National Renewable Energy Laboratory in Golden Colorado and at the University of Colorado, Boulder Computer Science Department, where he does research on large scale data systems, modeling, and optimization.