Fair is Fair: For the Sake of Main Street, Tax E-commerce - Shareable
Skip to content 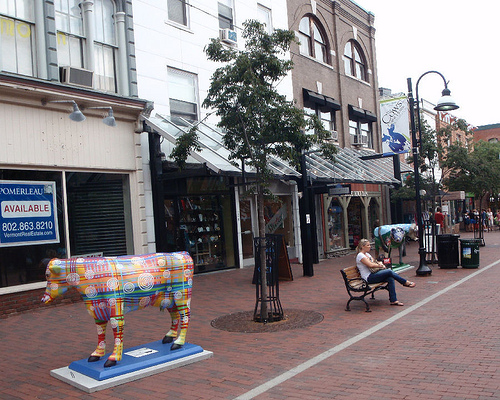 In my last blog I discussed how shoppers migrating to the Internet could mean curtains for many strip malls, big boxes and malls.

Now I want to raise the simple question of justice involved with this trend. Internet businesses are generally free from sales taxes, while brick-and-mortar stores must tack on 4-5-6-7-8 percent to each order—including many shops that enliven our neighborhoods while meeting our needs.

Any way you look at it, this is patently unfair—a government-sanctioned bribe to buy through from Amazon instead of your local book dealer, or e-Bay rather than that cool vintage store around the corner.

In tough times like these, a lot of independent businesses are already balanced precariously on the edge of insolvency, and a few more cents added to every dollar in sales might push them right over.

Fifteen years ago, this naked favoritism toward Internet sales was viewed as a justifiable way to nurture a promising new economic sector, and to help encourage the overall growth of the worldwide web.  Well, that's ancient history now.  Big web-based retailers need this kind of public largesse like Exxon needs a small business loan.

No one likes to pay taxes, and it’s true that sales taxes hit poor people much harder than the wealthy.  But it’s also important to remember that sales taxes bankroll a lot of state and local services we depend upon—from public transit to public education to police protection.  Less sales tax revenues; less public assets everyone can share.

And to make matters worse, empty storefronts foreshadow a plunge in property tax revenues, which is the mainstay of many local governments. Local and state budgets have already been clobbered by rising deficits coming out of the Great Recession, and further leaks in their tax bases will mean even more draconian cuts to critical public programs.

In Minnesota alone, taxpayers must make up for $149 million in tax \ revenues lost to out-of-state e-retailers. Following the lead of California, New York, Arkansas and four other states, a bill has been proposed in the state legisltarueto apply a modest tax to e-commerce, which is winning support even from some fervent “no-new-tax” Republicans.

The New Rules Project outlines A Main Street Fairness Act which factually makes the case for a level playing field between stores in our community and Internet merchandisers.  In includes a comprehensive resource guide.