While it seems clear that New Zealand-based social enterprise network Enspiral is doing exciting things in the social impact space, it can be difficult, at first, to understand what exactly Enspiral is. It is easier to begin with what Enspiral is not. Enspiral is not an incubator or an accelerator. It is not a training program, nor is it an advisory service. The website's FAQ page, which describes Enspiral as "sort of a 'DIY' social enterprise support network," offers both a promise and a warning to would-be Enspiralites. "If you're an independent, entrepreneurial person with a deep commitment to service and social change and want to discover your own way to have an impact alongside like-minded people, Enspiral is fertile ground," it suggests. "But you'll need to find your own way, and there's no program or official support."

Enspiral's hard-to-pin-downness is in part a product of its decentralized organizational structure, which is sometimes described as an open value network. The avoidance of power hierarchies is at the heart of the network's mission. "From the beginning, the first idea was more people working on stuff that matters," said founder Joshua Vial. "But it was also this idea about decentralized organizations—that there's a real possibility, with technology now, for different management structures."

Enspiral Members answer the question: What is Enspiral?

Vial launched Enspiral in 2010, several years after quitting his job at a web development company to split his time between volunteering and contract work. He began meeting people who, like him, were interested in social and environmental issues, but who—unlike him—didn't have a steady source of income. "So I thought, if I can help other people get higher-paid contract work, maybe we can do interesting things together," he recalled. He reoriented his consulting business to a collective focused on helping socially-minded professionals find work. "I started saying yes to every contract that came my way, and scrambling to find people," he said. "We were just looking for like-minded folks." 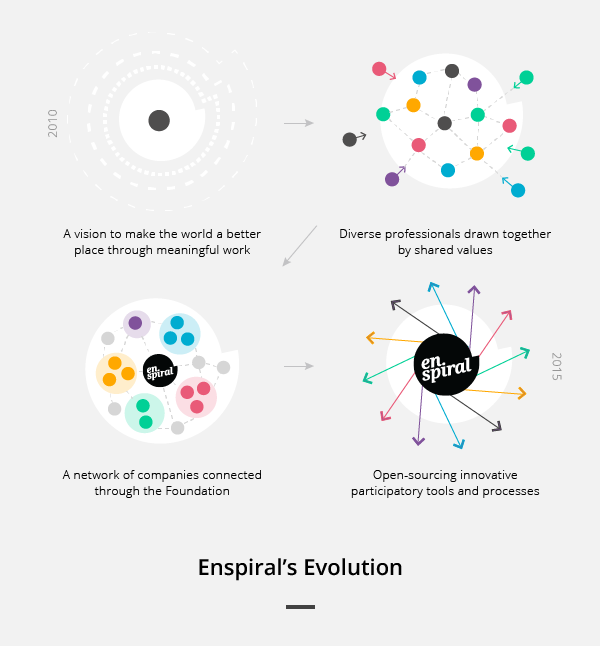 In four years, Enspiral evolved from a vision of "more people working on stuff that matters" to a global network of socially-minded individuals and enterprises. (Courtesy Enspiral)

From the start, Enspiral eschewed salaries and emphasized a marketplace model of resource distribution. "There are people with skills and there are different projects, but they've got clear budgets and clear deliverables," explained Vial. "We allocate people to projects in different ways. That's the key mechanic to getting things done."

Around 2012, as the company continued to grow, Enspiral hired an administrative staff, which they called a "support crew." But within a year, it became apparent that "it really didn't work for us at all," said Vial. "We started to get divergent experiences from the support crew and the contractors, and it felt like we were just under-resourcing a management team. We were doing things like you would at a normal organization." So the administrative staff did something that is unlikely to happen at a "normal organization:" they fired themselves. 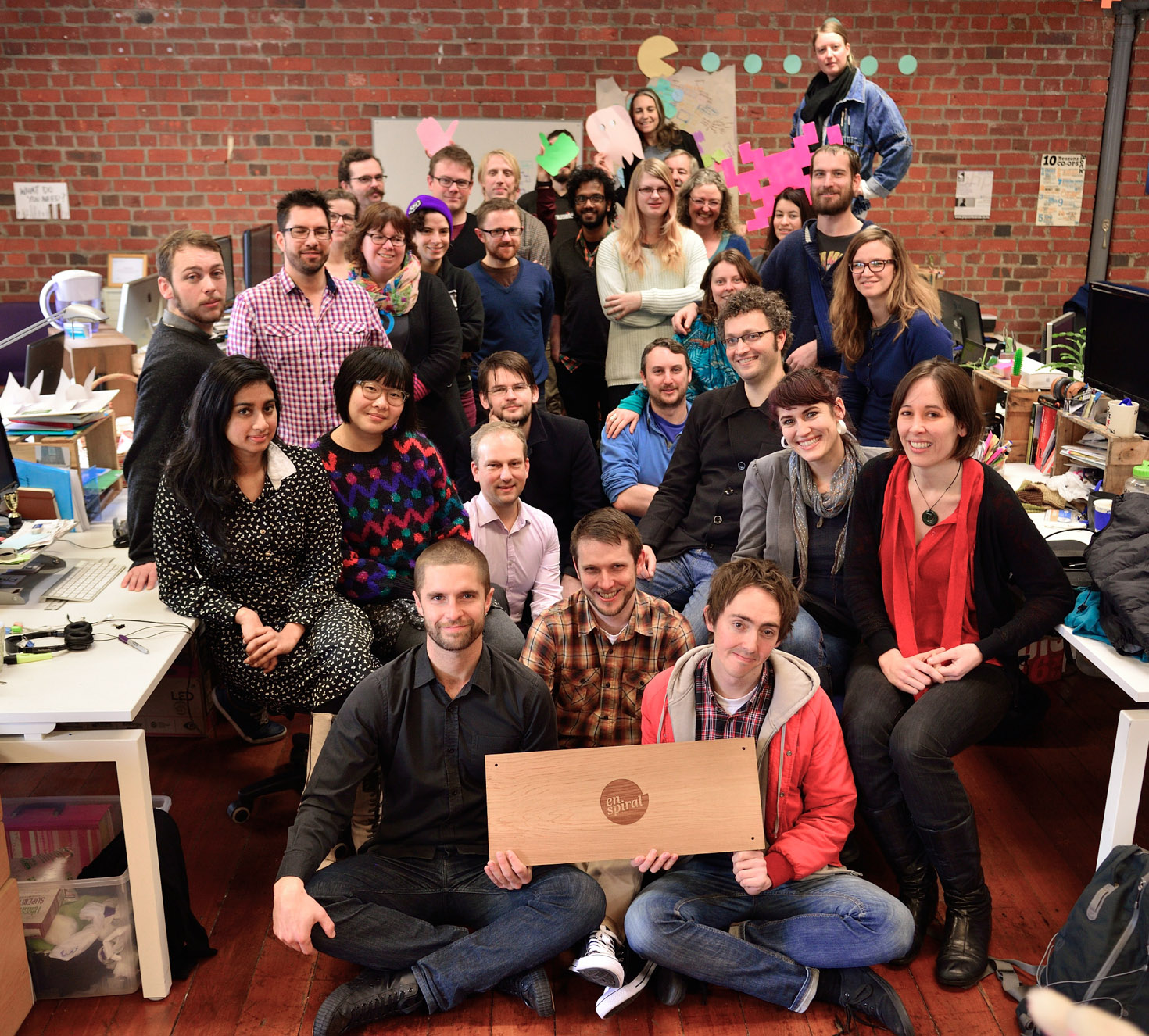 The Enspiral network includes over 150 contributors and friends from around the world. (Courtesy Enspiral)

Today, the hub of the Enspiral network is Enspiral Foundation, which Vial pictures "as the campfire we all sit around to have a collective discussion." Enspiral regularly hosts public gatherings, like afternoon teas at Enspiral Space, its co-working office. Individuals interested in participating on a more regular basis can become an Enspiral Contributor by paying an annual fee to cover core operating costs. (The Foundation subsidies people who want to be involved but cannot afford to pay.) The next level of commitment is membership. Enspiral Members are usually involved in the group for at least a year before being invited, and are expected to participate in collective decision-making, and to attend retreats and other in-person events. 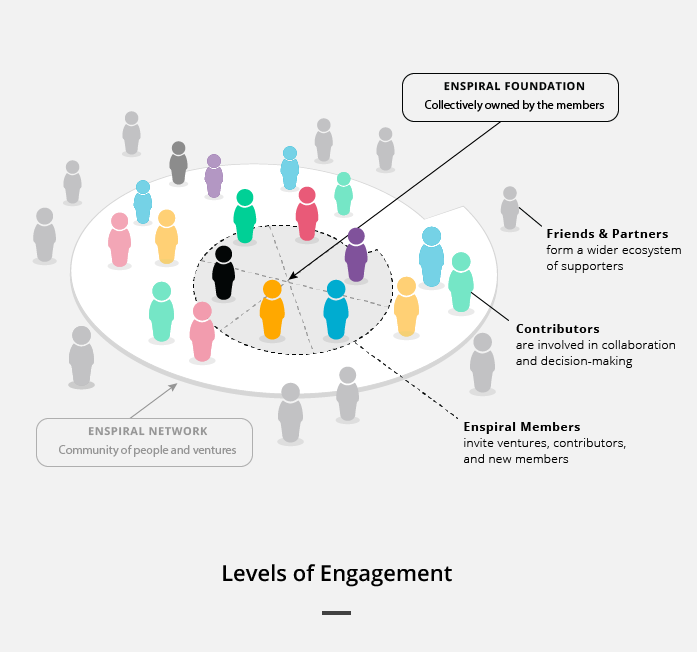 Individuals can choose among multiple levels of engagement. (Courtesy Enspiral)

Enspiral, though legally a limited liability company, acts as a cooperative. Every Enspiral Member owns one share in the organization. Shares cannot be sold, and the company does not pay dividends. "It's your citizenship card in the collective, pretty much. Our Members are the ultimate locus of power in the group," explained Vial. Enspiral Members make administrative decisions and budget collectively, with help from several open-source software programs. These include Loomio, a collective decision-making platform, and Cobudget, both of which were developed within the Enspiral network. 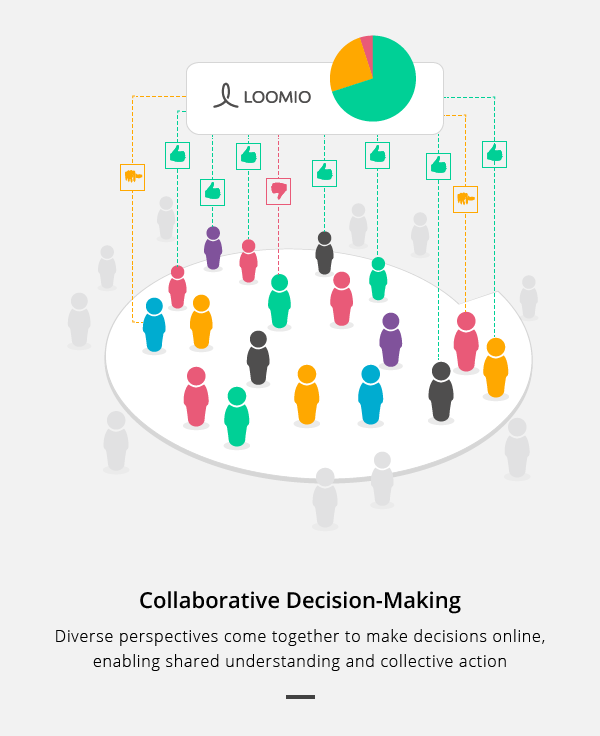 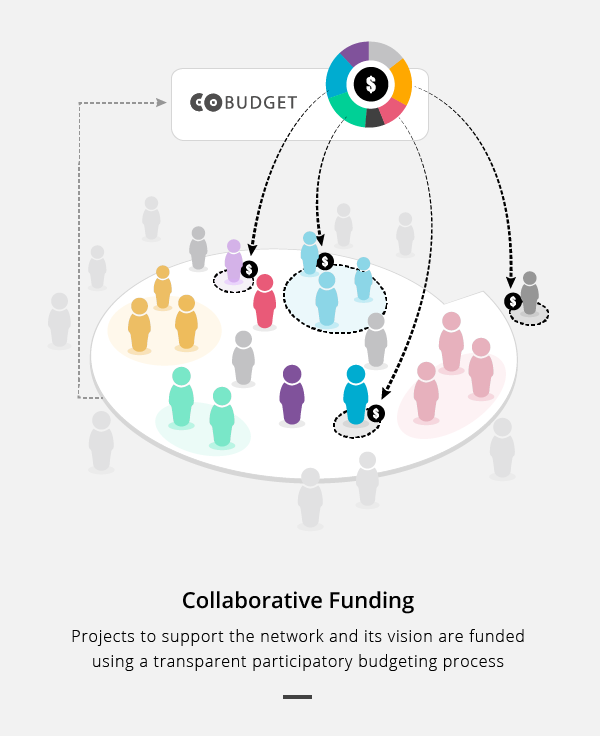 Enspiral Ventures are companies that have voluntary revenue sharing and mutual support agreements with Enspiral Foundation. The agreements are flexible, and may be changed with one month's notice from either party. Enspiral Ventures do not have any decision-making power in Enspiral Foundation beyond allocating the part of the budget they contributed through the collective funding process. "But because the Members are pretty much starting and running the companies, they're doing it as a way of putting some of their effort and money into support for our whole mission of Enspiral," said Vial. "It's much less about, 'Let's go find sponsors we're not that close to to give us money, because they want to get brand recognition,'" he explained. "It's much more a collective of companies saying, 'We're all dependent upon one another. If we can make this central organization strong, then we'll all get benefits from a richer community.'" 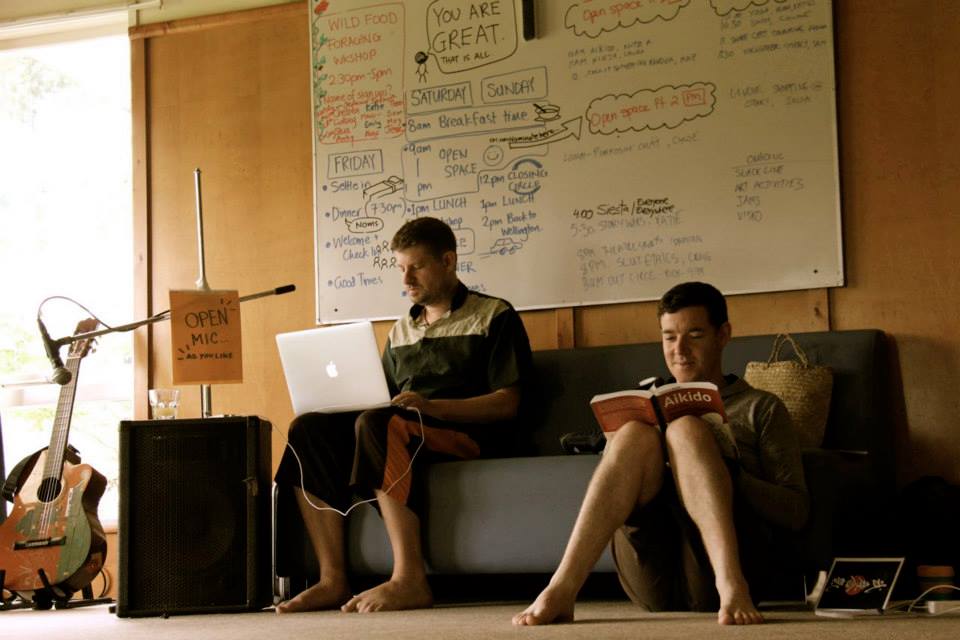 Enspiral's financial model is simple: pay what you want. The organization experimented with equity-sharing, but Enspiral Foundation recently returned the shares. "We didn't want to have the different dynamic of companies being bound together because they had no money to start with, and then they gave equity instead," said Vial. "As opposed to other Ventures, which, because they were cash-rich, just contributed cash the whole time, and then can walk away with one month's notice."

As a result, Enspiral Ventures' contributions vary by company. Enspiral Services, Vial's original company, collects up to 20% of the revenue generated by each independent contractor under its umbrella. It then gives one-quarter of these contributions to the Foundation, using the remaining 15% to cover internal expenses and fund Services projects. Contractors can change the percentage they contribute to Enspiral Services on a contract-by-contract basis, and Enspiral Services, like all Enspiral Ventures, can renegotiate their contract with Enspiral Foundation at will. "It's like, if you're giving the Foundation too much money, then change your contract and tell us what you want to pay," said Vial. "It becomes a prompt for conversation if some people contribute a lot and others don't. It also gives you really good visibility over the value people put on the network." 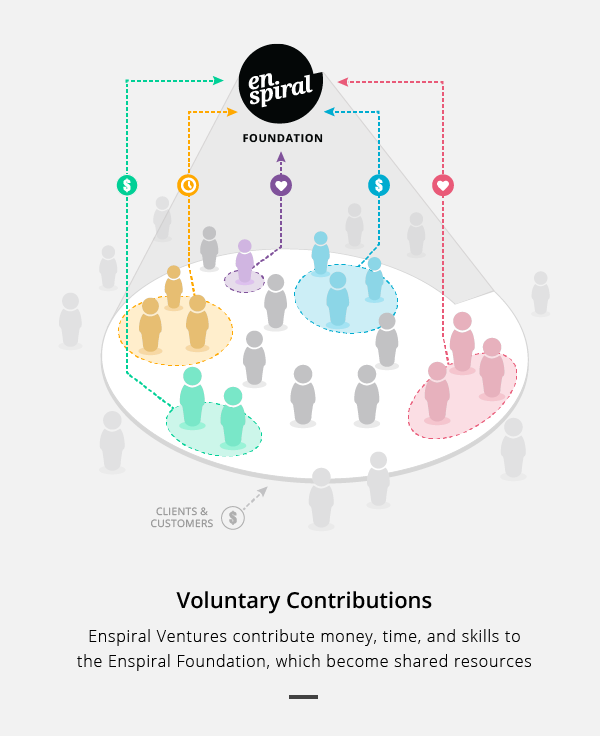 Dubious by the standards of conventional business practice, Enspiral's funding strategy is working. Vial estimates that company brings in about NZ$10,000 each month through Enspiral Foundation, plus another NZ$10-12,000 from Enspiral Services. As the company expands, and as the Ventures secure larger contracts, a logical next step is direct funding of new social enterprises. "I think we'll start to have enough financial strength to really invest in stuff rather than bootstrapping it," said Vial. "Because a lot of us are tired of that approach. It's hard work, especially when you do it over and over again." 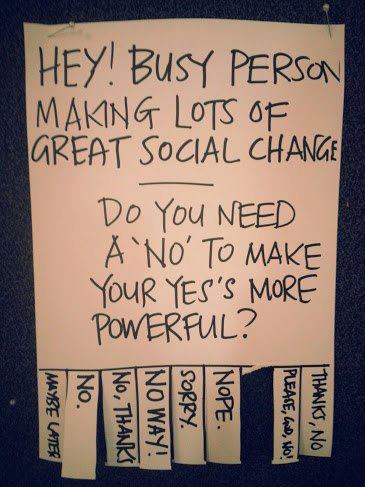 This sign appeared in Enspiral's kitchen, a reminder that learning to say "no" is as important as saying "yes" in a collaborative workplace. (Courtesy Enspiral)

Not every company can be Enspiral, notes Vial. It would be hard to apply the Enspiral approach to existing organizations. "It's just too different," he said. "It's like, 'Hey everyone, you're not getting salaried any more.'" And getting an Enspiral-type endeavor off the ground takes a certain amount of both patience and faith. Vial has heard from a number of groups worldwide interested in emulating Enspiral, but as yet none have come to fruition. In most cases, interest fizzled out after Vial made it clear that he could offer advice but not financial support.

Nevertheless, "I think if you're doing a professional services collective, or if people are doing a community of social enterprises, then it's a really powerful model for organizing," said Vial. He sees particular promise in the area of urban innovation. "I think a lot of what we've learned is directly relevant to them," he said. "When I look at the 'let's change our cities' sort of community, often they're really strapped for cash, and they've got really marginal business models." Bike shares and community gardens are great, said Vial, "but they're either cash sinks or they just scrape by."

What worked for Enspiral would work equally well for would-be urban reformers, he says: convincing highly-paid professional service workers (like lawyers, accountants, or programmers) to sign on to a collective based on contract work. "It was hard work, but it wasn't really risky," explained Vial. "And off the back of that, this really rich ecosystem and financial base emerged for funding the more marginal businesses." He wants people interested in urban environmental and social justice to know that Enspiral is there for them. "We'd love to help them get up and running," he said. "I think this could be a really significant way to leverage wider resource flows for people who want to change the city, and change the world." 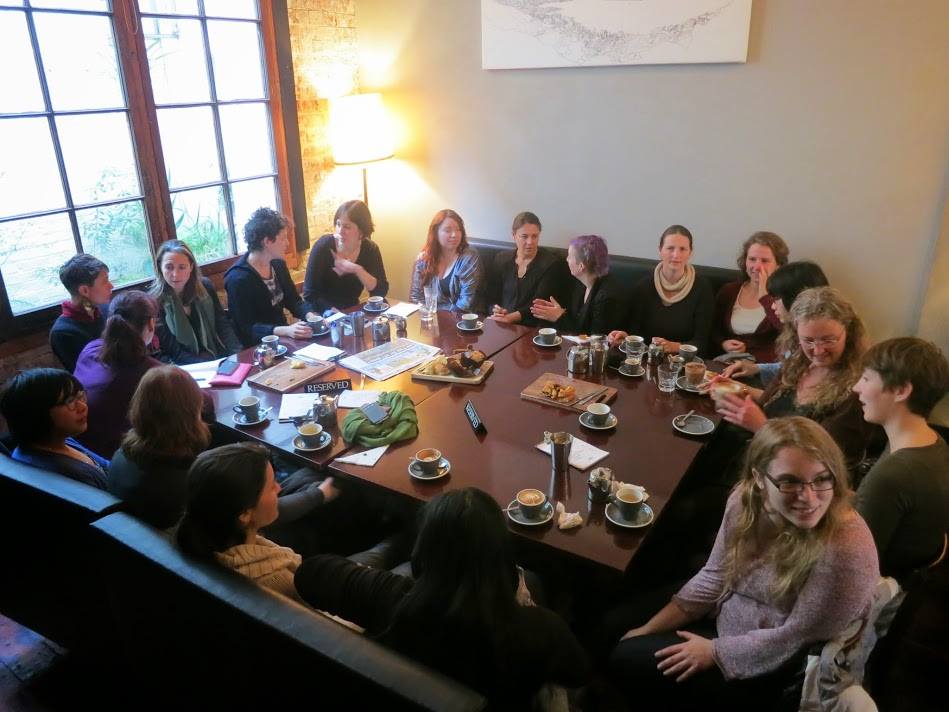 Anyone can get involved in Enspiral, either through virtual friendship or at in-person community events, like this women's tea. (Courtesy Enspiral)