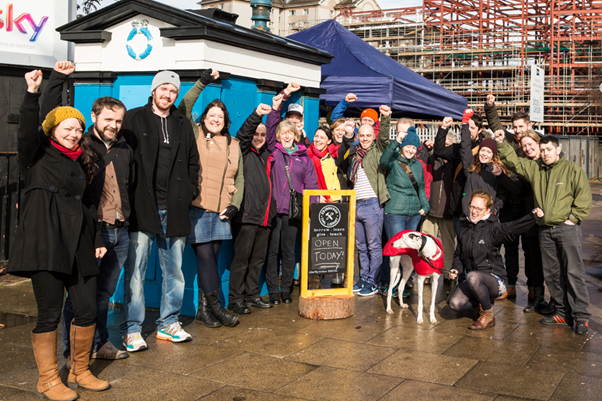 The average power drill is used for just 13 minutes in its lifetime. We clearly don’t all need to own one, and they’re often too pricey for many people to buy them in the first place — meaning a whole lot of untapped creativity and a huge amount of wasted money. And it’s not just drills which are expensively gathering dust in cupboards.

To tackle this bizarre mixture of over-supply and under-availability, tool-sharing libraries are cropping up around the world. These ventures give their members access to a huge range of tools for far less money than they’d cost to buy individually, and can become real creative community hubs.

Running out of a Dr. Who-style police box near the city’s docks, the Edinburgh Tool Library has been going since early 2015 and now has 1,200 tools, 180 members, and is growing fast. We caught up with its founder, Chris Hellawell, to find out about making bathtubs into furniture, working to bring young fathers and their children together, and everything else that makes a successful tool library tick.

Why a tool sharing library? What is it about tools that mean they make sense for something like this?

There are a few different aspects to it. There’s the basic human thing about using tools to do something more efficiently or do something you couldn’t do without them — that creative impulse is something we all have. As human beings, we want to make things.

There’s also a huge psychological aspect, that sense of well-being, health, and achievement related to making something. I think culturally we’re moving away from that. The culture in the West is more about consumption — owning and having things — rather than the sharing idea. The impulse is toward going and buying a product instead of thinking “How can I make it myself?”

Making is really therapeutic, and if you can give people to that process without it costing a fortune, then they benefit both from the tangible results, through their houses looking nicer, and also in terms of their mental well-being.

This sense of achievement that comes through learning by doing means it’s important that people have access to this stuff. One of the great things about the tool library is that a lot of times people come to borrow tools because they don’t know what they want to make or because they need a particular tool which they’d never normally have access to.

That’s the price part of it: the average UK household spends £110 on tools every year. We ask for an annual payment of £20, but if you’re unemployed or on a lower income, it’s pay-what-you-can.

We had an artist who used our tools to make a three piece suite of garden furniture out of old baths. She borrowed an angle grinder, which she’d never used before, and cut the sides off a bath to make a sofa.

She’s now using it to market her work, and taking it around festivals across the country. That’s something that she might not have bothered with otherwise — not many people are going to buy something as big as an angle grinder just to try it out. 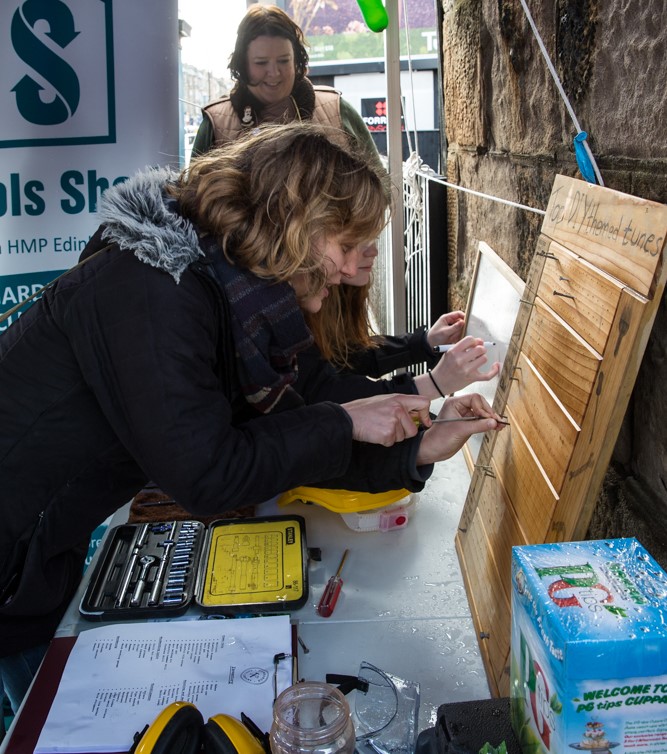 Who are your members?

I think there’s a fairly even split between people who are focused on sustainability, and then other people who are on lower incomes, who come to save money. From an environmental campaigning perspective, it’s interesting because the people who are normally hard to reach for traditional recycling campaigns are coming to us because they want to save money — they can’t go out and buy all these things.

And which is it for you?

I studied environmental science and forestry, but I’ve since worked for a lot of charities around employment and disability issues, and helping people who may not have the same opportunities as other people. So from my point of view it’s good to have the opportunity to meld those two things.

How does the structure of the organisation work?

At the moment, I do most work, but I want to get to a stage where I’m making it more self-sustaining. We have five members on the board — a chairperson, a treasurer, a secretary, and we’ve just elected one of our members to act as a conduit for members’ interests.

Including the board there’s about 12 volunteers who help out on Saturdays. Other volunteers come out of the membership to help out when we partner with community groups. We worked with one recently who built a wiki-house — an open-source community house — and that project was done with the help of some of our volunteers, and our tools.

What’s a week in the life of the tool library like?

We’re mostly online. We hire a police box once a week on Saturday mornings, which is our pick-up and drop-off point. People can come in there to sign up and pay a membership fee — whatever you can afford. We explain the rules to them and then they get access to our online database. If, say, they want an angle grinder, they search for it and it shows up with however many we have, then they submit a request and I confirm it if nobody else has booked it. I’ll then bring it along to the police box on Saturday, all of which means we only need to bring the tools we need once a week.

Right now, we have 180 members. At this scale we don’t need to have somebody there every day waiting — this suits people because most want to work on their projects at the weekend.

Having this weekly schedule also gives people deadlines for their projects, which is incredibly useful. Much like a regular library where people know they need to finish a book by a certain date, people tend to get stuff done because they need to return the tools in a week. Often, they say that if they owned the tools it would have taken them three or four months — until the got nagged into doing it. I think we must have saved a fair few relationships!

Could others do what you do in Edinburgh? Is your model something that anyone can copy?

As a social enterprise we still need to bring money in so we have someone looking at fundraising and the model we use. I want to show that this model works, and if we get a lucky break it doesn’t mean that everyone will — so we need to prove it isn’t a fluke.

We’re the only tool library in the UK, and with that comes a lot of prestige and media, but if another one opens up in a different part of the country they may not won’t have this level of exposure, which might hinder their success. I want other people to adopt the model, but I want us to keep doing things first. We are developing a mentor-trainee employability scheme which we think is the first of its kind in the tool library world. We are then hoping to share this with other tool libraries, many of which are in North America.

There are about 80 in Canada and the U.S. — they all have different structures, different sizes, and capacities — from sheds to huge warehouses. What’s interesting is that they can adapt to wherever you are. They could even be built into new housing developments. If you’re building a new set of flats, does it make sense for everyone in that building to own a drill, or should you build in a cupboard so everyone can share one? 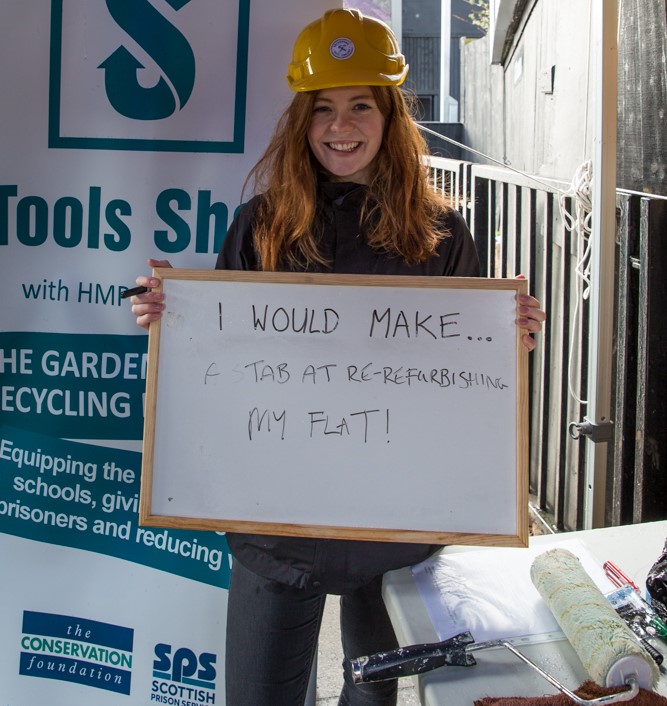 And you’re also involved in a lot of community projects, like Dads Rock.

Dads Rock is a charity which works to bring fathers closer to their children, through quality time and play. In the project where we partnered with them, the dads were young men who became fathers aged 15 or 16. Young men can have a lot of chaos in their lives, which means that relationships with their kids can suffer too. So with them we looked at making balance bikes — the idea was that it was something they would follow through on because they were building something for their kids.

A bike is a very common kid’s present — but this time their dad’s made it for them. Lots of the dads themed their bikes based on their kids’ interests – one made his kid a Harley-Davidson-style bike, others have been motorcross and minions-themed.

The project lasted for 8-10 weeks, and as time passed you could see them turning up every for every session, walking a bit taller. It became the reference point of their week — a real sense of time, order and focus. When the project ended they said they weren’t ready to finish — so they are now working to organise a residential weekend to make something to benefit the community they live in.

What I do worry about with short projects like these is what happens next.

And your plans for the future of the tool library are linked to this?

Yes. We want to move this into a workshop, where we can create a space where young folks can come every week, where there are open projects where people can set the agenda, where there are other people to help, and where there’s no judgement.

The tool library is an environmental passion but also a social passion. I want to prevent young unemployed people from falling through the cracks, where we can partner them with people who can mentor them.

I want to pair mentors with trainees and show there’s a mutual benefit to that. There are over 80,000 people over the age of 65 in Scotland who identify themselves as being lonely part or all of the time. We want to create a mentor-trainee programme, where experienced, older mentors with trades backgrounds, and who are at risk of loneliness and isolation, can work alongside younger trainees, who face challenges to gaining employment. Together they will catalogue and maintain our tools, demonstrate how to use them, and run the front of house part of the workshop.

When they have the confidence and demonstrable skills, we can work with the trainees on CVs and support them to get jobs.