Deep Sharing: How the Commons Amplifies the Sharing Economy - Shareable
Skip to content 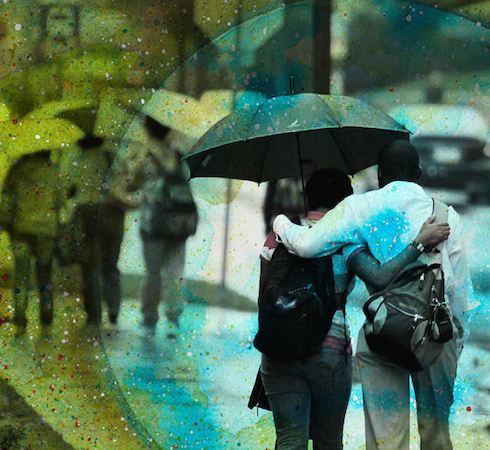 This article is a selection from On the Commons' new e-book, Sharing Revolution: The essential economics of the commons, which highlights how the commons amplifies the burgeoning economic revolution now widely known as the sharing economy. Click here to download your free copy.

On a bitingly cold and rainy November evening last year, I was in a pickle: I’d taken a city bus to CoCo, the coworking space where I office in downtown Minneapolis, and was seemingly stuck without an efficient option for getting to Birchwood Café, where I would meet friends for dinner, three miles away. That is until I remembered my new membership with car2go, a car-share service that had recently won a contract with the city of Minneapolis. I quickly located a vehicle using car2go’s mobile app and, my despair vanishing, dashed out of the building in search of the blue and white smart car parked only a few blocks away.

car2go’s operating program—“take it, drive it, park it”—allows users to drive vehicles and leave them on the street anywhere within the designated home area. What I love about it, beyond the fact that it’s incredibly cost effective compared to owning a car, is that the community of drivers stewards the system. Users are encouraged to keep the cars’ gas tanks full and tidy their tiny interiors before ending a trip. What’s more, the drivers I know agree that it actually feels good to leave a car in a new location because, in doing so, you increase access to the shared resource.

That’s the appeal, along with saving money and the planet, of the sharing economy—the emerging economic revolution where access has become more important than ownership.

But what struck me during that first trip in November was this: Not only was I participating in the sharing economy, but my use of the car-share system was utterly dependent on city streets, a commons belonging to all of us. Not to mention the airwaves that transmitted information to my smartphone, which we technically share together.

Sharing has always been essential to human life, but “What’s new,” says Neal Gorenflo, founder of Shareable Magazine, “is our blindness to it.” Through our individualized pursuit of happiness—a lifestyle ushered in during the Industrial Revolution—many of us have forgotten that for centuries the most promising source of security came from our ability to build and maintain strong social connections and respect the commons.

From water and forests to public transportation systems and public health to human knowledge and the Internet, the commons includes all that we share. But it’s not just stuff, it’s also the ways we work together—a whole new economic and political paradigm. Elizabeth Royte, author of Bottlemania: How Water Went on Sale and Why We Bought It, aptly notes, “In a world of hyper-individualization…sharing our stuff with friends or strangers can be a political act.”

Putting the ideals of the commons into practice in our everyday lives means engaging in community activities, for example, and sharing with our neighbors. “We act under the assumption that we will take care of each other and make decisions that increase our collective self-reliance,” says Julie Risatu, co-director of On the Commons.

The good news, says Jennifer Bradley, a fellow at the Brookings Metropolitan Policy Program, is that we’re starting to witness more and more people taking life into their own hands. People are starting to ask, “What can we do together that we can’t do by ourselves?”

This cultural shift seems capable of both strengthening community in a profound way and creating new opportunities for sharing on a scale we’ve arguably never witnessed before. Through the sharing economy, we can now use online social networks to share and swap goods and services with peers (people we may or may not know) in a safe and efficient way. While some of these exchanges fuel the market economy—for example, 3 to 5 percent of any contribution you make through Kickstarter, the popular crowdfunding platform, goes to Amazon—more familiar, tried-and-true models of sharing—such as libraries, cooperatives, and credit unions—offer an alternative to private ownership.

With the global population skyrocketing and our supply of natural resources decreasing, the cultural shift toward sharing seems timely. But the question is will it actually help us protect our commons and break the status quo of modern consumerism?

To Leland Maschmeyer, a creative director and author of The Triumph of the Commons, the sharing economy succeeds as a first step toward a commons-based economy because it helps people understand that “private ownership does not have a monopoly on happiness, health, and freedom.” Owning things doesn’t necessarily make us feel good, but sharing certainly does. And the more people become comfortable with the idea of sharing, says Maschmeyer, the more they become comfortable with other kinds of sharing, the true spirit of community, and the commons.

Another boon of the sharing economy is its ability to help us “use our existing physical resources and systems more effectively,” says David Mahfouda, founder of the taxi-share system Bandwagon. In an effort to make sharing more appealing, Mahfouda offers passengers an incentive to share their cab with others headed in a similar direction. In doing so, Bandwagon takes advantage of underutilized capacity in the current cab system, a strategy that will likely amount to significant environmental advantages over time.

Sharing is not only good for the planet, but also serves as an “antidote to social isolation,” says Royte, adding: “That is, unless you orchestrate all your collaborative consumption [another term for the sharing economy coined by Rachel Botsman, author of What’s Mine is Yours] online, through the thousands of websites that facilitate this new economy.” Does sharing make us happy when there’s no person-to-person interaction? Probably not.

Of course, as I’ve said before, the looming question is how services within the sharing economy can become more effective in reaching across lines of class and geography. Some people are starting to address the question of equity in thoughtful ways, and I especially appreciate Jennifer Bradley’s recent Techonomy interview where she suggests how the sharing economy could address needs for a larger swath of society. With a few tweaks, an Uber-like system, for instance, could help low-income people get to work.

Despite these possible shortcomings, this I know to be true: When we own less, share more, and use resources only when we need them, we will be on a path toward what Maschmeyer calls “redesigning society to promote the commons.”

The recent rise of both the sharing economy and the commons seems to suggest a growing recognition of the fact that our health, happiness, and security depend greatly on the planet and people around us. This book highlights the many ways, new and old, that people connect and collaborate to advance the common good and explores how we can work together to extend opportunities for sharing to even more people. For when we operate as though we are all in this together—because we are—we will discover a tremendous abundance of goodwill, imagination, and the drive to create the kind of future we want to live in.