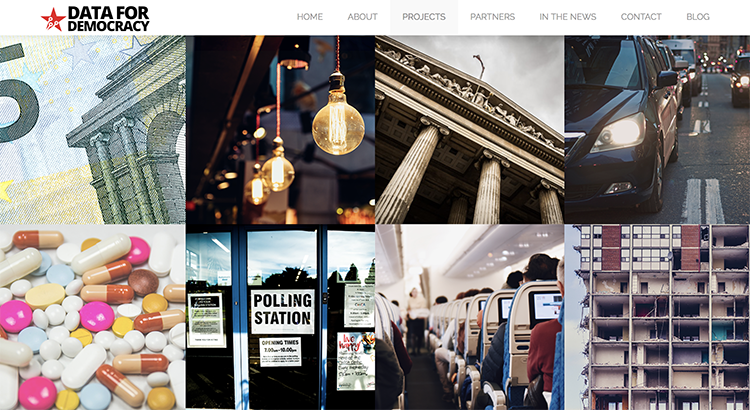 Data for Democracy is a grassroots community dedicated to using the tools of Data Science to create a positive social impact. Imagine a bunch of digital activists running around the Internet analyzing alt-right Twitter bot networks and collecting data on immigration and family separations for the National Immigration Law Center, and you'll have a pretty good idea what this group does. Its roughly 3,400 members include both tech experts like mathematicians, software engineers, and data scientists, as well as a wide range of social scientists: anthropologists, political scientists, lawyers, and historians.

Members volunteer their time and specialized training to a constantly evolving suite of projects focused on civic good — or, a vision of it filtered through a particular set of political filters. As long-time member and Louisville-based software developer Margaux Spring put it, Data for Democracy attracts "people who were already working with and had an affinity toward data and civic tech who were looking to add some good to the civic tech landscape that was not tied to the government or the government's agenda… tech that benefits citizens and the community" in a direct way. In its less than two-year lifespan, Data for Democracy has worked on a mix of community-led projects and partnerships with government and NGOs, including:

Founded in December 2016 in the wake of Donald Trump's election as President, Data for Democracy originally came out of a call to action by a data-centric podcast called Partially Derivative, run by Jonathan Morgan,who founded the group as a free channel on the communications platform Slack. It then grew at a rapid rate, attracting people organically through little more than weekly shout-outs on the podcast and through word-of-mouth. What's particularly different about this activist community that distinguishes it from the thousands of other groups that popped up in response to various policies enacted by the current administration. The appeal, according to some of its members, is twofold: the inclusiveness of the community itself and the unapologetic worship of hard evidence, statistical tests, and social impact. The group's community manager Astrid Countee explained the integration between the social and methodological attraction of Data for Democracy, saying that the "focus is on social impact with data rather than cool tech projects. But the biggest draw was the people in the community. This was the nicest tech community that I had ever been a part of. People were genuinely welcoming and inviting. That gives me hope."

The community aspect of Data for Democracy is central not only to the appeal of the organization to its members but also to its effectiveness; new members bring in new connections, new project ideas, and help expand the group's scope and reach. Paragon Science's Dr. Steve Kramer, who regularly shares his Twitter anomaly detection data in the community, came to Data for Democracy through a personal connection with Jonathan Morgan. Amanda Álvarez, a Houston-based data scientist and geophysicist, found the community through listening to the podcast. Her description of the early days of the group describe how people joining this community brought not only their effort but also fresh ideas, skillsets, and questions to answer, leading to an expanding repertoire of projects. She has found that in her experience, "most successful projects we had have been things that grew up totally organically." According to Álvarez, many of the partnerships, such as the National Immigration Law Center, came about through the personal connections of one or more of the community members — in fact, it sometimes acts as an on-call group of data analysts. Álvarez says the center has reached out to Data for Democracy for help with various pressing projects.

Does this sound like a community you would be interested in checking out? "You're welcome to participate irrespective of your skills," says Spring. "You do not have to be a data science professional to contribute in a meaningful way to our community, and D4D is stellar at letting people know that and making them feel welcome and heard," she says. The group is always looking for new projects and new perspectives. The only real requirement is a commitment to and trust in quantitative methods and a desire to improve your community.

Header image by Data for Democracy

Patrick W. Zimmerman is a data journalist, historian, and anthropologist interested in the connections between mass culture and the social and political contexts in which it exists. He is the co-founder

Patrick W. Zimmerman is a data journalist, historian, and anthropologist interested in the connections between mass culture and the social and political contexts in which it exists. He is the co-founder and editor-in-chief of the data journalism site Principally Uncertain. He earned a Ph.D. in Social and Cultural History with a concentration in Anthropology and then (mostly) fled academia to write about things that more than 10 other people will actually read. Plays beer-league hockey and softball. Professional toddler wrangler. Likes dogs, good booze, delicious food, and horribly awesome kung-fu movies. Drop him a line at patrick@principallyuncertain.com