Mesh netowrks are popping up all over the world, but they nothing new; they've been around for over a decade. What's new is their uses and implications.

The internet is tied up in knots. Communication is no longer free. We are no longer able to even define the word “free”.

While many on the both sides of the digital divide are debating these issues, techies have long since come up with several solutions, some of which are “officially old” by now.

In his video criticizing SOPA, internet rapper Dan Bull said he will have to resort to using “pigeons and smoke signals” if his videos are censored by copyright any more. But must he go that far? Perhaps Dan Bull didn't know about meshnets at the time, but they could offer prosumers like himself a viable alternative for creating and distributing their remixed content because, as Einstein said, nothing is actually created or destroyed in the Universe; everything is transformed.

If producers of cutlure were given a space to create without fear of censorship by governments or by prosecution from copyright holders, it would create a commons infinitely larger than what we currently have at our disposal. If you consider the Darknet as an example, such a non-place already exists, but it's not accessible without special software and there's not much cultural production going on there; it's mainly a place of consumption and file sharing.

So what's new about mesh networks? Not much, they've been around for over a decade in the US and even longer abroad but have remained a plaything of niche enthusiasts…until recently. Meshnets are now starting to appear in the news, thanks in part to the US National Security Administration (NSA) spying scandal that has sparked new interest. That, the collapse of Net Neutrality in the US, and other factors are sparking a global movement for open wireless networks, local mesh networks, and community broadband.

Mesh networks are made up of a series of interconnected computers, linked with WiFi antennas across rooftops or other means, thus creating a parallel private internet where people can connect with one another without the World Wide Web (WWW) and the surveillance that comes with it. Since WiFi mesh networks are limited by the distance an antenna can transmit, they are usually restricted to one town or city, which is why they are frequently called wireless communities.

Since wireless communities are frequently located within the same city, it allows for on and offline meetings to occur, thus building actual community. In the case of the Red Hook wireless community in Brooklyn, a project to build a small meshnet brought some excluded members of the neighborhood into the fold and resulted in keeping the whole community connected even when the WWW went down for several days during Hurricane Sandy.

In addition to being resilient to WWW outages and government spying, mesh networks can also allow people to communicate with the outside world when, for example, a pre-Arab Spring government intentionally shuts down the internet. Meshnets allowed people (especially journalists) to share what was happening from within the community, which acts as a sort of "closed commons" in respect to the "open commons" of the WWW. The transmission between the wireless community and the WWW takes place through a node. 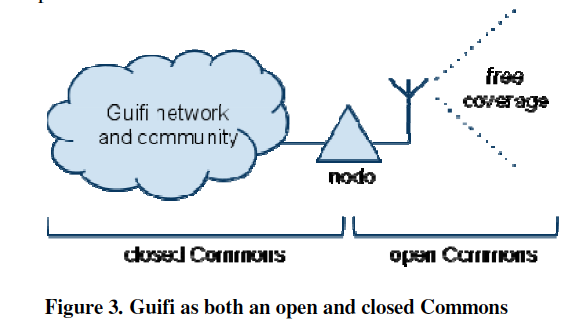 Inevitably, all this autonomy needed to be governed in some way; or at least self-governed, so a group of community LAN activists created the Wireless Manifesto, which states clearly the responsibilities of each participant in the network and the overall goal to create a Wireless Commons for everyone through a global meshnet. Here is an excerpt from the Wireless Manifesto:

"We will work to define and achieve a wireless commons built using open spectrum, and able to connect people everywhere. We believe there is value to an independent and global network which is open to the public. We will break down commercial, technical, social and political barriers to the commons. The wireless commons bridges one of the few remaining gaps in universal communication without interference from middlemen and meddlers. Humanity is on the verge of a turning point because the Internet has transformed the way humans relate with one another."

So what happens when these hackers, geeks and concerned citizens eventually build a global meshnet? Well, there are several versions already in existence. There is one of sorts already operating from within the internet itself called Hyperboria. When you enter the Hyperboria network you can find blogs and websites that don't exist anywhere else on the WWW. If you have a blog on Hyperboria, you can really say whatever you want, and there are actual humans reading your work, not just bots and fake likes.

On the rooftops, there is CONFINE, a European project to link together some of the largest WiFi meshnets in the world located in Spain, Greece and Austria. But what can being on one of these meshnets do for you? Let's look at the relative success of one of the oldest and largest meshnets in the world: Guifi, a Catalonian wireless meshnet with over 20,000 operational nodes contributed and sustained by users.

Until recently, rural Catalonia was on the losing side of the digital divide. It now ranks well above the Spanish average, and even above other European countries in terms of broadband penetration.

"One of the key drivers for the Guifi network is the Wireless Commons license it is based on, whereby a user is both a consumer and a producer of broadband services. Guifi distinguishes itself from networks that provide free WiFi access by this strong emphasis on its community, of which total technical transparency and self regulation are key aspects. Yet Guifi is also open, allowing for viral growth on the basis of new volunteer extensions to the network."

When you have a distributed communications environment like Guifi, or any other mesh, all sorts of unintended things start to happen, as the research of Penny Travlou on virtual communities points out. Communities come together to "reinterprete and facilitate creativity," and some examples of this phenomenon can be seen in AWMN (Greek mesh network), which has chatrooms, a Craigslist clone, and even used to have an online cinema, kind of like a DIY netflix or Pirate Cinema. But there are many more possibilities which haven't been explored yet.

The autonomous zones created within a "closed commons" could be the antidote to the creative strangulation that our culture is enduring at the hands of copyright holders and their government enforcers. It could provide us with spaces to experiment, remix and refine projects that need to blossom instead of being nipped in the bud by corporate trolls who do nothing except impede the creation of new culture as long as a profit can be sucked out of the old one, which everyone is getting tired of.

As availability of public space dwindles, one recourse is to create virtual public spaces where people can congregate, co-create, and enjoy the fruits of their labor (and facilitate the same offline). And when one of these projects gains enough momentum within a wireless community, it could take the internet by storm without giving anyone the opportunity to block it.

Do you know of a creative project made by users of a meshnet? If so, please share in comments. I'd like to share such work at the proposed Open Culture Festival at the unMonastery in Matera, Italy.