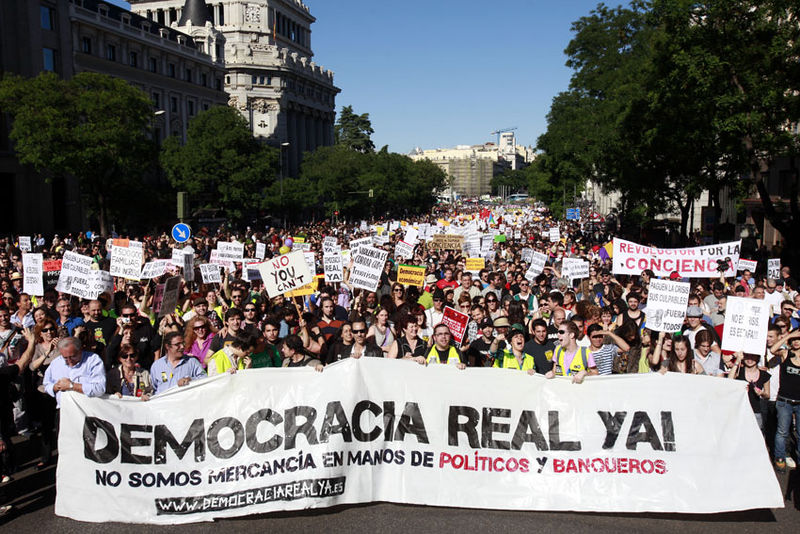 Spanish war tax resisters and activists from the 15-M, or indignados, movement (the Spanish version of “Occupy”) have joined forces to organize a sharing economy network and to nourish it with redirected taxes.

How this came about is an interesting story, and though their project is decidedly edgier and more confrontational than most of what goes on under the sharing economy umbrella, we can learn a lot from what they have accomplished.

When the financial crisis hit Spain, the banking and finance industry rushed to the government for bailouts, just like they did in the U.S. But Spain went further, abruptly amending its Constitution to make debt payments to these financiers the government’s “absolute priority” — higher than any other budget item — and to mandate austerity budgets that cut funding for social services.

Meanwhile, Enric Durán carried out a daring bank robbery. He took out loans from 39 different Spanish banks, under false pretenses, and then fled with the money — nearly half a million euros. He put the bulk of it into a variety of anti-capitalist activist projects, and publicized the action as his attempt to fight back against the banking system’s hijacking of the Spanish economy. 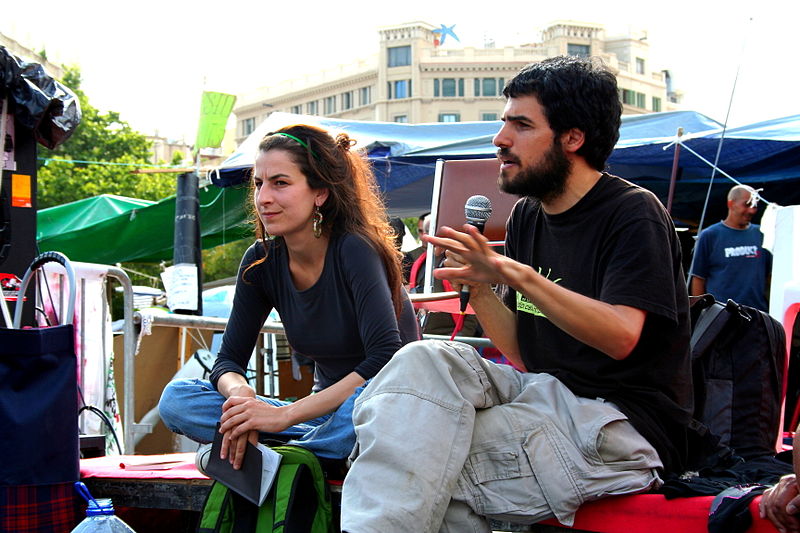 Among the projects this Robin Hood funded was one called Derecho de Rebelion (Right of Rebellion). It was launched shortly after the Constitution was amended — something the project characterized as a coup “dictated by international capital and enacted behind the backs of the people.”

Derecho de Rebelion encourages the people of Spain to withdraw their allegiance from this delegitimized government and instead “declare ourselves citizens of the popular assemblies and the assemblies of post-capitalist projects in which we participate”:

We pledge to do everything in our power to construct a new, popular force that enables a new society where decisions will be actually realized by the people.

…we commit ourselves to begin and extend an action of complete tax resistance against the Spanish state and those who control it… we will not pay their debts, because we do not recognize this constitution. Tax resistance serves to fund the popular assemblies, and from these, gives “absolute priority” to participatory funding of the resources that we really consider public.

Because the situation that we are experiencing in Spain is common to many countries worldwide, and because the ruling economic powers are global, we encourage people around the world to assert their right of rebellion by means of manifestos like this.

— Manifesto of a New Rebel Dignity

This manifesto came out as the first Occupy Wall Street demonstrations were beginning. The following Spring they published half a million copies of a tabloid called ¡Rebelaos! (“Revolt!”). It recommended methods that had been developed by the war tax resistance movement in Spain, with a couple of modifications:

With the advice of veteran Spanish war tax resisters like Arcadi Oliveres, the group began work on a crowd-funded tax resisters’ handbook. They also opened what they called “offices of economic disobedience” in Madrid, Barcelona, Castellón, and Zaragoza (the first four of what are now at least a dozen such offices), where they counsel prospective resisters on how to resist the income tax and VAT and how to set up self-managed businesses and cooperatives.

Comprehensive Disobedience involves breaking the social contract with the State of a territory where one lives, in order to bring into being a new social contract in a community with which the individual is really linked.

The second edition of the movement’s Handbook of Economic Disobedience expands on this theme. It highlights tax resistance and gives practical advice on how to go about it, but it also puts tax resistance in the context of a much more comprehensive restructuring of personal and communal economic life that aims to help you take your resources away from big business, from the financial system, and from the government, and put those resources instead at the service of people in your community by means of more personal, face-to-face gifts and exchanges in decentralized networks.

They acknowledge that this is going to be a long process, and that for some time people will have to operate in two worlds at once: the official economy where the rules and priorities are set by a privileged few for their own benefit, and the emerging one in which everyone participates on an equal basis.

Because Big Finance and Big Government are so tightly interlinked, the movement is augmenting tax resistance with resistance to mortgages and foreclosures, defaults on credit card debt, and personal bankruptcy as a tactic to make debts like these uncollectable – something like the Strike Debt! project in the U.S.

They are taking their money out of banks in favor of credit unions, new “ethical” banks, and microloan-style plans that fund alternative economy projects. In some cases they are leaving money behind entirely and moving to barter or alternative currencies or Local Exchange Trading Systems which further strengthen the alternative economic network and build ties between its members.

And they are experimenting with a variety of ways to use the laws and tools of the official economy to subversively build and strengthen the sharing economy. Corporate personhood? We can play that game too!

By participating in this network of experiments, by building new methods of production and exchange, and by redirecting their resources and their loyalty from the government to democratically-organized grassroots projects, together they are building a new economic system in which people are the highest priority.

How can those of us in the U.S. learn from Spain’s “comprehensive disobedience” model? Well, one thing we can do is to reach out to the American war tax resistance movement. They already have a long-standing tradition of redirecting their taxes from the government to more worthwhile projects — it seems a natural fit for them to partner with the people who are developing the new sharing economy. It could be that all you need to do is extend a hand of friendship in order to find enthusiastic start-up capital for your subversive sharing economy innovation.

If you’re more daring, you might ask them for advice on how you and those around you can redirect your own tax dollars away from the politicians in Washington and into the projects whose benefits you have seen with your own two eyes. Tax resistance may be just as important a part of the new economy here as it is in Spain.

David Gross is a war tax resister from San Luis Obispo, California. He is the author of the book 99 Tactics of Successful Tax Resistance Campaigns (2014). He blogs

David Gross is a war tax resister from San Luis Obispo, California. He is the author of the book 99 Tactics of Successful Tax Resistance Campaigns (2014). He blogs about global tax resistance at The Picket Line.