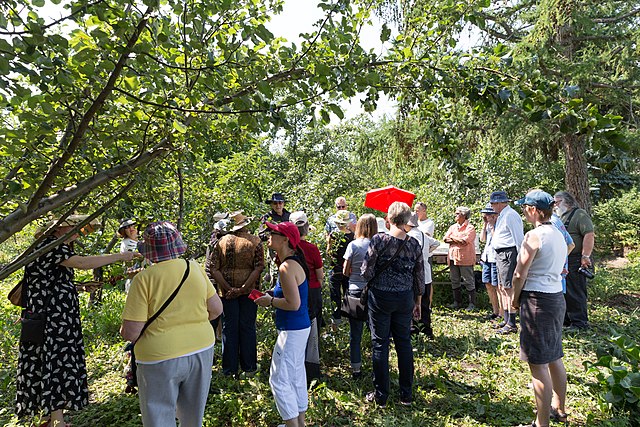 “Everybody will be able to come here and pick fruit,” says Mateja Angelina Kramar of Croatia’s first community orchard.

Her organization, Zasadi Stablo, Ne Budi Panj (Grow A Tree, Don’t Be A Stump!)  took over operations of the orchard in Varaždin, in the northwest of Croatia, a town also known as home to the first community gardens in the country.

Today, community gardens can be found in towns across Croatia, and Varaždin is riding that wave of success with a new project: a community orchard with about 200 pear and apple trees planted in circles, and 90 raspberry and blackberry bushes. In the center there’s room for social gatherings, and a sculpture of a tree made by a local sculptor.

“We see this orchard as a great opportunity to educate people directly and in such a way that they can later implement that knowledge in their own orchard, if they have one,” Kramar says.

Grow A Tree is already starting to shift the orchard from a conventional cultivation to permaculture. A local university has added two beehives, and plans to add new plant species to increase biodiversity and to attract more bees, as well as birds, bugs, squirrels, and reptiles.

This, combined with less mowing, should also enhance the soil quality, which should mean more and better fruit come harvest time.

The orchard, and similar projects, are an opportunity not only to rebuild the soil, but also to rebuild a sense of community.

“It is very important to treat the soil more sustainably, since our soils have been so degraded,” explains Kramar.

The Grow A Tree community feels that, just like the soil, human communities in Croatia are in many ways exhausted, and are in need of nurturing. The orchard, and similar projects, are an opportunity not only to rebuild the soil, but also to rebuild a sense of community.

“With this orchard we are hoping to show what a community can do for the environment,” says Kramar who, together with other volunteers, is planning a series of workshops and other programs in the orchard before the first harvest.

Already, there are signs that this might be happening.

After learning about  Varaždin’s orchard project, a new initiative emerged in the Croatian capital of Zagreb, where citizens want to start a permacultural community orchard.

Inquiries are coming in from other cities as well.

Kramar says she’s already been asked for guidance on community organizing, and on legal process. “I believe that we will soon have a couple of cities with orchard initiatives,” she says.

She also hopes that fruit can become more accessible to citizens by planting fruit trees around the city, instead of more common, decorative trees found in parks.

“If we succeed in starting a couple of community orchards, we believe we will be one step closer to changing the laws about using urban spaces for growing food,” she says. “This already looks like an octopus of good influences that is gaining more and more arms. People just needed encouragement and a strong vision.”

Indeed, the same ethos that emboldens Kramar, is beginning to inspire action in a growing network of community-gardening initiatives. These projects are hoping to transform urban realities around the world.

In the United Kingdom, The Orchard Project has planted and tends over 540 community orchards across England, Scotland, and Wales since 2009.

They notice more and more interest from people to prioritize local climate and ecological conservation.

“As awareness of the climate crisis and biodiversity loss grows, people want to do something to help. Orchards are a great way to help in a practical, local way.”-Orchard Project Community Manager, Joanne Hooper

“The food supply problems at the start of the pandemic made people question where their supermarket food came from,,” says Orchard Project Communications Manager Joanne Hooper. “Also, the desire to feel more connected to others locally, and connected to nature, have both increased among the general public. As awareness of the climate crisis and biodiversity loss grows, people want to do something to help. Orchards are a great way to help in a practical, local way.”

Community orchards are also places to develop and build a culture of sharing — not only by sharing fruit, but also by passing on traditional skills and rituals. These include traditional Wassail ceremonies, in which people sing to trees to promote better harvest; blossom picnics; and skills such as grafting and pruning.

“Orchards used to be seen and used as venues for local people in the past, and we try to reinstate that by holding events in them and welcoming people to these special spaces,” Hooper says, including storytelling, yoga, mindfulness, bird watching, foraging, and picnics.