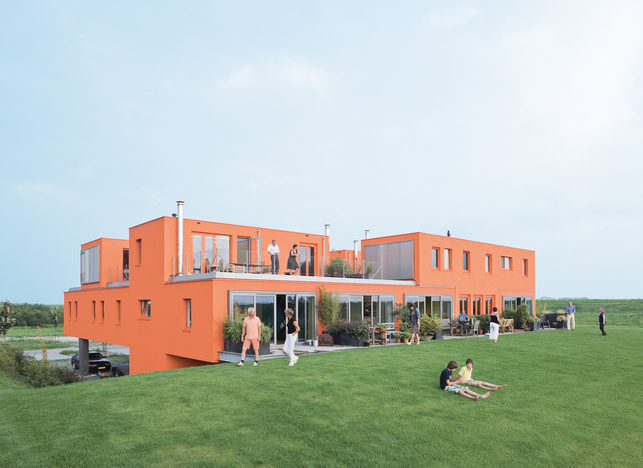 Dwell magazine just published a fantastic feature on a Dutch cohousing development, which reads much like a how-to:

With the idea of communal living all too prone to conjure visions of student squalor or hippy homeliness, Villa van Vijven comes as a refreshing surprise.

The strikingly sculptural bright orange building, reclining in the flat Dutch landscape, accommodates five families under a single, stylish roof. And there’s not a whiff of carob in the air. Step into any one of its five apartments and you are convinced that you've entered an independent piece of architecture entirely. Though they vary in size (the largest is 3,200 square feet), each unit has a panoramic view of the surrounding landscape and its own distinctive layout, decor, and, of course, inhabitants. The group ranges from a business manager to a sports coach to an art historian. 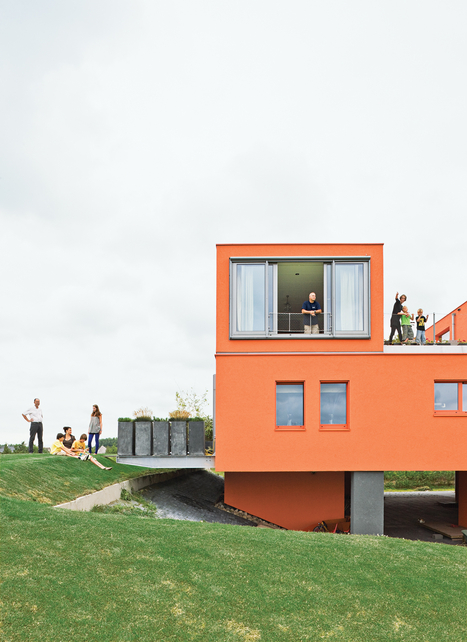 “We don’t necessarily see each other every day,” says Paula van Dijk (the art historian). “Often, we just say hello when leaving or coming home again.” Cees Noordhoek, a sales manager who lives here with his wife, Jacquelien, and three kids, adds: “It just doesn’t really feel like communal living.”

Yet Villa van Vijven is a truly collective and collaborative project, financed and commissioned by five families (19 people in total) who wanted to build a home that they could otherwise never afford: an architecturally high-impact retreat set in extensive gardens, with great views of the surrounding landscape and nearby lake. Residents Johan Bouwmeester and Marlene Blokhuis got the ball rolling when they found the large plot to the southwest of the new and rapidly growing city of Almere, an hour from Amsterdam. The appeal of the relatively rural setting, just 10 minutes from the center of the city, was manifest, and the couple began inviting design-minded acquaintances to join in on the project…

Though the architecture favors idiosyncrasy over uniformity, when it comes to each other, the residents are all quick to note that pragmatism is what they value most. They are unanimously keen to emphasize that they are best neighbors, not best friends. Thus, they maintain a fund for the upkeep of the house and are working on the idea of a shared amphitheater with a fireplace for the garden. But house meetings are kept to a minimum—far fewer than the twice-monthly gatherings demanded by the five-year development process. 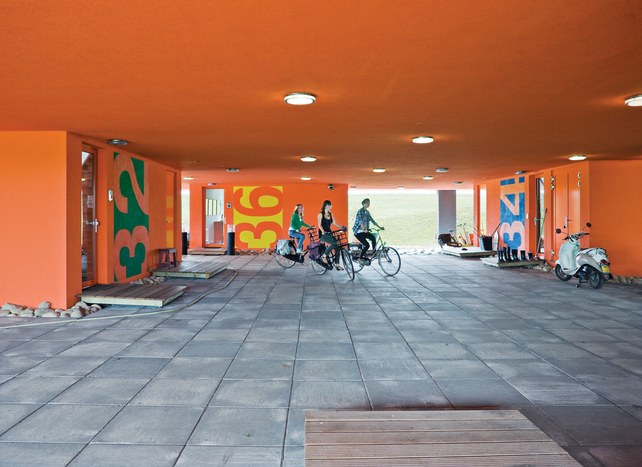 “The biggest advantage of living together is that we can use each other’s expertise,” Krone says. “Another advantage is that when you’re on vacation, there’s someone to pick up the mail, water the plants, and feed the pets.” Even while enjoying all these advantages, “I think we all still wonder what on earth it was that made us go for this unusual design,” Noordhoek says, as he strolls through the garden. “But it just stands out in every respect,” he adds, turning to look at the villa. “It surprises me every day that we dared to do it. It really is the building of our dreams.”

Please do read the whole thing!