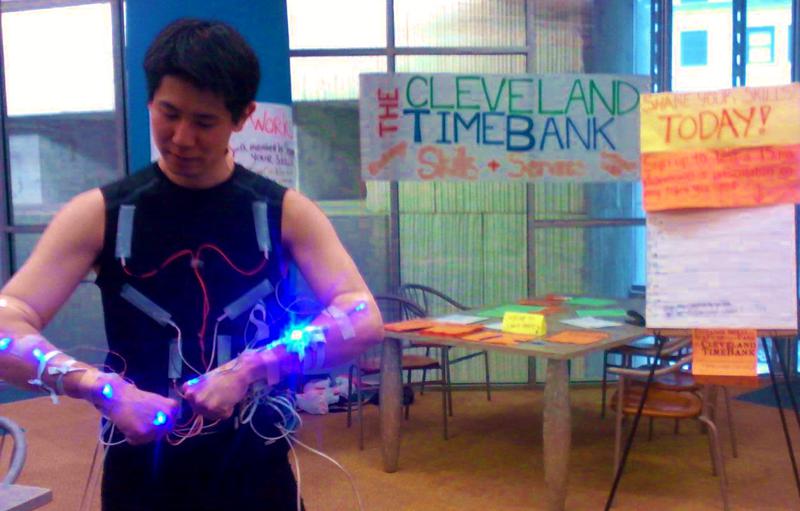 Unemployment is still rampant, and the foreclosure crisis is far from over in Cleveland, Ohio, leaving nearly 16,000 vacant homes and 20,000 vacant lots in its wake and more than one in four households receiving food assistance. While we in Cleveland have responded with direct action, resisting evictions and creating guerilla gardens, we still have unmet needs in our communities and yet abundant resources that are untapped or underutilized. In August 2012, a local community development organization, called the Stockyard, Clark-Fulton & Brooklyn Centre Community Development Office, began organizing the Cleveland Timebank (CTB) to address this gap.

At its most basic level, timebanks provide a structure for people to share what they have and to produce what their community needs. In the Cleveland Timebank (CTB), members earn time credits by donating an hour of their time to share a skill or provide a service. All members hours are equal. Here's an example: Nate was earning hours  by flyering for community events. When his family suffered a severe bed bug infestation last month, Maria, a Timebank member who had never met Nate, gave her time arranging the delivery of a donated bed and household items for Nate. Maria spent her hours to borrow tools from Megan to repair her basement bathroom. Megan is saving her hours to have her porch roof replaced this summer. The timebank allows people to make trades happen that wouldn't otherwise without money.

After being hired by SCFBC as an AmeriCorps VISTA member to organize the Cleveland Timebank last summer, I spent two months researching timebanks and how they have been organized and gleaning advice from other timebank coordinators. During this time, staff and volunteers knocked on doors or left flyers with an average of 1,000 households per month. Our team engaged block club leaders, religious institutions, and businesses to help in promoting the timebank.

We immediately began hosting potlucks where each member announces the skills and services they would like offer and request within the CTB, which I later learned is a type of gift circle. After hosting fourteen bilingual potlucks, we found them to be the most valuable way for members to build real friendships and a sense of solidarity. In addition to arranging exchanges at potlucks, members post offers and requests in our Facebook group. I also maintain an Excel sheet with members’ contact information and skills, publish a bi-monthly e-newsletter, and act as “match-maker” between members, especially those without internet access.

With membership has now reaching 150 people, we’ll be launching an open source website in July. OScurrency's timebank software, which found on Shareable's article Just in Time, will allow members to more efficiently arrange and record exchanges. Flywheel Tech Collective, a local worker-owned cooperative whose projects support international solidarity movements, developed our software in exchange for hours, and we’ve applied to have our website developed at the Cleveland Give Camp event.

Because we won the Shareable Seed Grant, we were able to organize skillshares this Spring and Summer where we could pay for all material costs, to make them much more accessible. Skillshares so far have included: Preventing Identity Theft, Couponing 101 and 102, Intro. To Bee Keeping, Seed Starting 101, Seed Box Making (inspired by this Shareable article), How to Build a Website in 15 Minutes, and Canning and Preserving. Skillshares planned for this summer include Pierogi Making with Marg, My Money Workshop, Garden Tool Maintenance, How to Legally Take Over Vacant Lots, and Intro to Fire-Spinning.

In this early stage of the timebank’s development, we’re not ready to create formal organizational partnerships so instead we find small ways to create mutual benefit with them by exchanging favors. Our relationships with local businesses and nonprofits have been essential for attracting new members. A few examples of these relationships include:

As the Cleveland Timebank moves into its second year, we are preparing to transition towards a member-run organizational structure. We recently hosted our first General Assembly, at which twenty-five members formed working groups that will develop administrative structures and define roles necessary for the daily operation of the CTB. Members are creating educational and outreach materials, and will be developing templates that groups throughout the city can use to form satellite timebanks or affinity groups that can develop and operate autonomously while being connected to the larger network of Cleveland Timebank members.

As we plan for the growth of the Cleveland Timebank, we are trying to be intentional about creating structures that are flexible and support the greatest level of possibility for people to organize to meet their communities’ unique needs and assets. The Cleveland Timebank will continue to look for opportunities to support the integration of mutual aid and co-production into the service delivery models of existing non-profits and institutions, as well as support the growth and development of small business.

The concept of a timebank may seem trivial as a response to the struggles of low income communities, but along with some economic relief, it can provide the beginnings of a social support system. Members can gain time, energy and support to organize around other goals in their communities. By exchanging skills and services through the Cleveland Timebank and having fun in the process, members have already committed to building a more resilient community.

Christina Keegan is a community organizer developing the Cleveland Timebank. She aims to build resilient urban communities through sharing and to learn more about creating a new economy. She also

Christina Keegan is a community organizer developing the Cleveland Timebank. She aims to build resilient urban communities through sharing and to learn more about creating a new economy. She also teaches natural building methods.