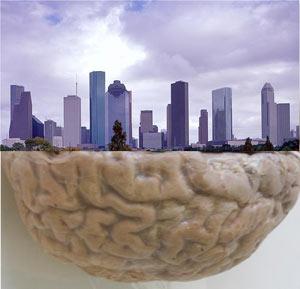 “Natural selection has passively guided the evolution of mammalian brains throughout time, just as politicians and entrepreneurs have indirectly shaped the organization of cities large and small,” said Mark Changizi, a neurobiology expert and assistant professor in the Department of Cognitive Science at Rensselaer, who led the study. “It seems both of these invisible hands have arrived at a similar conclusion: brains and cities, as they grow larger, have to be similarly densely interconnected to function optimally.”

As brains grow more complex from one species to the next, they change in structure and organization in order to achieve the right level of interconnectedness. One couldn’t simply grow a double-sized dog brain, for example, and expect it to have the same capabilities as a human brain. This is because, among other things, a human brain doesn’t merely have more “dog neurons,” but, instead, has neurons with a greater number of synapses than that of a dog – something crucial in helping to keep the human brain well connected.

As with brains, interconnectedness is also a critical component of the overall function of cities, Changizi said. One couldn’t put together three copies of Seattle (surface area of 83.9 sq. miles) and expect the result to have the same interconnectedness and efficiency as Chicago (surface area of 227.1 sq. miles). There would be too many highways with too few exits and lanes that are too narrow.

In exploring this topic, Changizi discovered evidence linking the size of a city or a brain to the number and size of its supporting infrastructure. He investigated and documented how the infrastructures scale up as the surface area of brains and cities increase.

As cities and the neocortex grow in surface area, the number of connectors – highways in cities and pyramidal neurons in brains – increases more slowly, as surface area to the 3/4 power, Changizi found. This means the number of connectors increases in both brains and cities as S3/4, where S = surface area. Similarly, as cities and brains grow, the total number of highway exits and synapses — which share a similar function as terminal points along highways and neurons — increases with an exponent of about 9/8. The number of exits per highway and synapses per neuron were also closely aligned, with an exponent of approximately 3/8.

These and other findings are detailed in the paper “Common Scaling Laws for City Highway Systems and the Mammalian Neocortex,” published this week in the journal Complexity. The complete paper may be viewed online at the Complexity Web site.