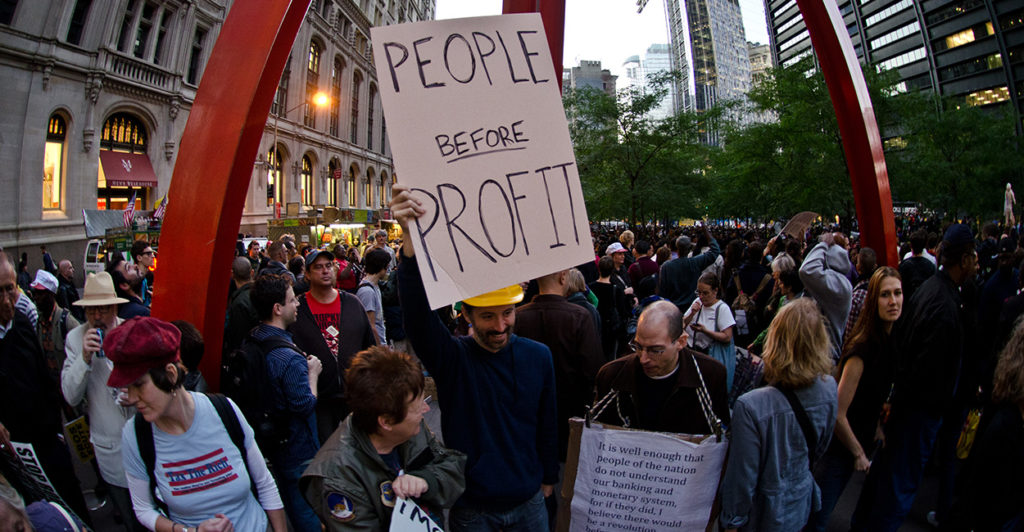 Since the 2008 financial collapse, people across the country have been exploring new ways of democratizing the economy. How could the disaster inflicted by Wall Street be utilized as an opportunity to create new and improved institutions? From worker cooperatives to land trusts to participatory budgeting, democratic models of traditional institutions began to take shape.

Public banking is one alternative model, and the grassroots movement that has formed around it intends to radically reimagine the banking system in the United States. Working with legislators across the US, advocates are pushing for the creation of public banks on the municipal, county and state levels.

The modern movement for public banking was spearheaded by Ellen Brown of the Public Banking Institute just after the 2008 financial collapse. Brown has since authored several books, including most recently “Banking on the People: Democratizing Money in the Digital Age,” published by The Democracy Collaborative. Shareable spoke with Brown about how public banking is a solution to the extractive and exploitative Wall Street model.

Robert Raymond: Can you give a brief overview of how our current banking system works and why it’s problematic?

Ellen Brown: The first problem is banks are privately owned and ultimately direct credit where their big clients want it go. Their mandate is to make the most money possible for their shareholders; they always go for the big hedge fund loan, for example, over the small $50,000 local business loan, which is not going to be as lucrative as their big international clients. Today only 15 percent of credit actually goes to businesses — the other 85 percent goes into the speculative economy or things like derivatives, the stock market, and [real estate] for houses that are already built where they’re basically just bidding up asset [valuations] against each other. So, it’s not going into productivity; it’s not going back to our local communities.

The current banking system is also very expensive because our cities and states are paying very high fees to these Wall Street banks to manage our money, and the interest is going to them and not back to us. Right now, local governments deposit their money in Wall Street banks and that money is not lent back into our local communities for the most part. It goes abroad, it goes into big corporations, and it goes into other Wall Street investments.

And why do you believe that public banking is a better alternative to the current Wall Street-run banking system?

With public banks we’re actually talking about government-owned banks — we’re talking about what local governments themselves can do with their money. If we owned the banks we would get interest back, for example. We could also direct the money into our local communities, and we would actually be expanding the money supply in these communities. It would increase productivity, allow small businesses to expand and do more hiring and ultimately create more jobs.

In many ways you spurred the modern public banking movement when you started writing about public banking after the 2008 crisis; specifically about the country’s only public bank, the Bank of North Dakota. What drew you to that example?

The Bank of North Dakota was formed in 1919 as a result of a farmers’ movement. Farmers in North Dakota were losing their farms to the big out-of-state banks and when they realized that, they got together and formed something called the Nonpartisan League. North Dakota is a very conservative state, but their name indicated that it wasn’t a right or left thing. It wasn’t about socialism necessarily, but about keeping their money in their own state and leveraging it for their own purposes.

So now, by law, all of the state’s revenues are deposited in the Bank of North Dakota, which gives it a massive deposit base. They’ve built up their capital over many years and now have a $7 billion bank, which is a lot considering the population is only 760,000.

There was an article in The Wall Street Journal in 2014 that said the Bank of North Dakota was more profitable than Goldman Sachs and JP Morgan Chase. The question is, how did they do that? Well, they just have very low costs. They cut out the middleman — they don’t have shareholders bleeding their profits out, no $20 million CEOs, so they’re able to use their profit to make below-market loans into the local community.

And so you began writing blog posts about the Bank of North Dakota, and these pieces ended up sort of spurring a whole movement.

My writing on the Bank of North Dakota generated a fair amount of interest, and I ended up forming a discussion group with about 200 people. After a couple of years we felt like we knew what we needed to know, and it was time to quit talking and get out there and do something. So we founded the Public Banking Institute as a nonprofit to help support state and public banking initiatives across the country.

It was around this time that the events at Standing Rock created a lot of outrage at the big Wall Street banks — particularly Wells Fargo, who participated in financing the construction of the Dakota Access Pipeline. Groups of advocates and cities pushed their legislators and their city councils to pass resolutions to take their money out of Wells Fargo. Several big cities like Los Angeles and Seattle ended up divesting from Wells Fargo around that time.

But, if you divest from Wells Fargo, where do you put your money instead? You could just put it in another big bank like Chase, for example, but they’ve also been implicated in numerous frauds and they’re certainly not putting their money back in local communities. The natural corollary to that was, if we pull out of Wall Street we need to form a publicly owned bank to put it back into.

At this point, what are some of the biggest barriers that Public Banking Institute is facing as a movement?

The system is much more geared towards private banks and it’s slowing us up from getting municipal public banks established. In California, for example, eight different public banking advocacy groups have formed a coalition called the California Public Banking Alliance (CPBA) which has been pushing for a bill that would carve out a special charter for public banking. The bill, AB 857, just passed in the California State Assembly and most of the state senate committees. It would make it much easier for publicly owned banks to be created, because there’s currently no public banking charter available in the state.

Another issue on the national level is that currently new [de novo] banks are supposed to have FDIC insurance, but FDIC insurance only covers $250,000 per depositor and — if we’re talking about a public bank which only takes municipal bank deposits, for example like in North Dakota — you’re going to have far more than $250,000 per depositor [i.e. the state or city] to insure. So FDIC insurance wouldn’t do the state or city much good [since a single depositor would have millions, or in the case of the state of California billions, to deposit]. They would have to pay for the insurance and it would put them under the supervision of the FDIC, which chiefly underwrites and serves the biggest Wall Street banks. The Bank of North Dakota is not a member of the FDIC and was grandfathered in so they aren’t required to be a member, but the new rules for forming a de novo bank are that you must have FDIC insurance. One thing that we want to do is carve out an exception for a public bank. The bank would need some sort of collateralization to protect the deposits, but FDIC insurance isn’t the most functional solution.

Is there a local group that is making the right moves right now? What are they doing that other groups should copy?

Currently the most active public banking group is the CPBA. Activists have been attempting to set up [public] banks for a decade, and have pushed the AB 857 bill to overcome a number of those obstacles, allowing municipal banks to be formed. Gov. Gavin Newsom has said he is in support of public banking, so hopefully he will sign the bill if it gets to his desk.

CPBA is largely composed of very active and tech-savvy millennials. Their website looks great; they know how to make their own videos; and they’re very active on social media. They are also very good at organizing and marshaling support. They have learned from the experience of others that we need some legislative support at the state level in order to get municipal banks set up. We are delighted. The troops have arrived.

How should the movement evolve to be successful?

Massive unrest and revolutionary fervor are happening globally, but activist groups tend to be limited to their own circumscribed silos. If we could manage to bring all those groups together under one umbrella, we could be a seriously effective force. Public banking advocates feel that public banking could be such a unifying force. Ideally, we could form a political party or at least a political action group.

My own sense, though, is that to make significant headway, we really need to get the federal government and the Federal Reserve involved. A continual question raised by opponents is whether cities and states will be liable if their public banks wind up with more bad loans than they have capital. We need to do as China does, and support our local public banks with the deep pocket of the central bank. Rather than putting either the insolvent enterprises or the insolvent banks into bankruptcy, China just writes off the bad debts. Another alternative would be to move bad debts onto the books of the central bank, just as the toxic mortgage-backed securities of Wall Street banks were bought by the Fed after the 2008 crisis.

What is your vision of the future — what would life be like if every city had their own bank?

I envision a national public banking system in which banks [are] the local arms of a nationalized central bank; one that [is] transparent and accountable to the public.  I elaborate on this in my latest book, “Banking on the People: Democratizing Money in the Digital Age.”

With a national public banking system, governments, local businesses and individuals could get below-market loans; bank profits could return to federal and local governments for public needs; the economy would be stimulated; jobs would be created; infrastructure and social programs could be funded; corruption and the financialization of the economy could be minimized; and income equality could return.

And finally, what can readers can do to support the movement / help get a bank in their community?

People can form their own public banking groups or join one in their area. We make resources available on our website. Of course, we would be delighted if they wanted to donate. They can also spread the word by email or on social media. I’ve written several hundred articles on the subject that are available on my personal website.