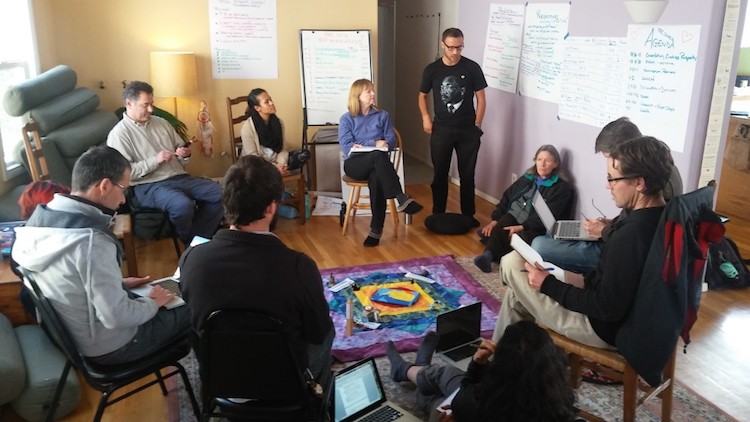 Since 2015, my colleagues at Shareable have been participating in a "shared gifting" process through the Thriving Resilient Communities Collaboratory (TRCC). Mostly funded by the Threshold Foundation, the TRCC is a national network of leaders working to boost local communities through participatory grantmaking.

The organization has created a council, made up of past grant recipients, along with representatives from both TRCC and the Threshold Foundation who work together to allocate community grants. Shareable's strategic partnership director Tom Llewellyn has been a member of this council since 2017. The council members meet to review all grant proposals and decide which projects should move to the second round. After another revision process, which involves collaboration and peer review, the council meets again to determine how to distribute funds from the shared pot.

"The entire process is very collaborative and encourages new partnerships between the organizations that are participating in the circle," says Llewellyn. "We've taken advantage of the peer review process and the projects we have received funding for have been greatly improved as a direct result."

Participatory grantmaking, also known as "shared gifting," puts a twist on the traditional grant giving process by shifting the power to the grant applicants. Rather than have one donor or foundation decide where their money will go, applicants from various organizations work closely with a grant giving organization to make that decision. The applicants then collaborate to decide how they will split the grant up amongst themselves.

While in the past, the donors were recruited through heavy fundraising efforts, Ellie Lanphier, program manager of Philanthropic Services at RSF Social Finance, a financial services organization based in San Francisco, California, says that more and more "donors like the model and come to us looking to participate in the program."

Whereas traditional grant giving includes strict stipulations for how money is to be used, participatory grantmaking focuses on collaboration. "By moving control of funds from donors to organizations, we create the trust, accountability, reciprocity and community that are absent from traditional philanthropy models," according to RSF Social Finance's website. Not only that, the shared gifting process allows nonprofits to honestly share their vulnerabilities and consider riskier and more creative propositions.

At RSF Social Finance, the grant giving process starts when the team works with a donor to narrow down the focus of the donation. Once a particular field has been selected, staff members determine a geographic region to focus on and reach out to a large number of nonprofits that may be interested in participating. They then review the nominations they've received and invite around a dozen organizations to submit a proposal. The proposals are then shared between all the participating organizations in preparation for the shared gifting circle day.

The shared gifting circle is a day-long event where grant applicants get together to ultimately decide how the grant will be distributed. On the first half of the day, "people come together and get to know each other on a personal level," says Lanphier. In the afternoon, the group listens to each other's proposals and starts the process of divvying up the funds. This is an involved two-round process during which participants first focus on the funds they need and then decide on whether to share some of their funds with other members of the group. Lanphier says that "it is common for the organization that has the most need to walk away with the most amount of money."

Lanphier acknowledges that a full-day is a lot to ask from the participants but hopes that "the connections and network are the most valuable part of the shared gifting experience." This point of view echoed by Llewellyn. He says that "it takes a fair bit of work to be on the council … [But] it is definitely worth the time spent, for both the money and the resulting partnerships."